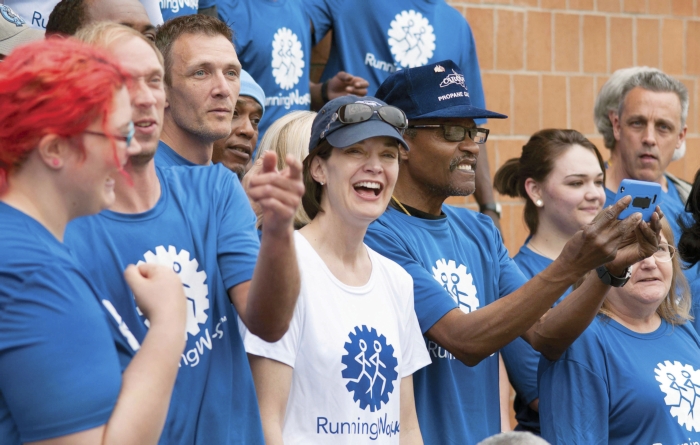 Donald McCraney was just one of the homeless guests who came to Rowan Helping Ministries on Wednesday evening, March 25. McCraney’s story was only slightly different from those of the 17 others who entered the door to find out about the new program called “Running Works.”

As with most, McCraney had more than a little bit of apprehension but also knew that he liked running and exercising already. An Air Force veteran, McCraney is from Griffin, Ga., and by way of Atlanta has followed a path to Salisbury in search of work. Now living at Rowan Helping Ministries, he has interviewed for a housekeeping position at the W.G. “Bill” Hefner V.A. Medical Center.

Running Works is a nonprofit organization promoting sport for social change, including cycles of abuse, neglect, poverty and homelessness. Running Works founder and executive director Meredith Dolhare, herself a trauma survivor, brought quite a presence to RHM that Wednesday evening. With her, she brought 12 Running Works veterans from Charlotte. Dolhare also brought 60 pair of brand new Brooks running shoes, plus shorts and Dri-fit shirts. The shoes were donated by Donnie Forsyth at Charlotte Running Company for the Salisbury program.

Based in Charlotte, Running Works addresses the stigma of homelessness and addiction. The vast majority of team members are either homeless or at risk of becoming homeless. In addition to providing a running program, there is also support for good health, securing jobs that pay livable wages, and finding permanent housing.

While many of these programs were already in place at Rowan Helping Ministries, Executive Director Kyna Grubb was excited to be partnering with Running Works.

“I hope they can recreate the successes from their Charlotte efforts,” Grubb said. “We have an extensive plan detailing how both organizations will work together for the betterment of our clients.”

The Salisbury Running Works program will be managed by Stuart Perkins, program coordinator. Perkins has six months of experience working in Charlotte with the homeless and put together a proposal that detailed extending Running Works to Salisbury.

“Our goal is to find employment and housing for the guests,” Perkins said. “But we start with short term goals, such as getting an ID or a driver’s license. We will make small steps at a time, empowering the client to help themselves.” Perkins will continue to work with Sheenia Daugherty, RHM education and transitions manager.

Coming along from Charlotte as an example of Running Works’ success was Matthew Hoffman. He started attending meetings while homeless on the Charlotte streets. Already a runner, he heard other runners coming by while he was trying to sleep near the sidewalks.

“I wanted to exercise, knowing that by doing so I could bring some normalcy to my life,” Hoffman said. “I had no lofty goals at the time, just simple ones like running and having fellowship together. For those that feel neglected by society, this program can really make a difference. I came along today to lend an ear and talk about my own experience.”

Hoffman has already completed a 50K race, just over 31 miles.

Former EMT Renee Solomon, who now lives at RHM, said she came to the meeting because she had gotten out of shape and wanted to become a runner.

“Right now, I have to walk though I plan to build up and run,” Solomon said. “But more than that, I want to give back to the shelter because they have been so good to me. I am definitely apprehensive, but still in it for the long term.”

Another military veteran, William Hill of Salisbury, knows the importance of exercise. Like McCraney, Hill uses a YMCA membership provided by RHM and the Rowan County YMCA for regular exercise. Hill suffers from glaucoma, yet it doesn’t keep him down.

“I have already done a mile today at the Y,” he said. “I am nervous about the program, but I won’t do it a day and then quit. I am eager to get going because all of us need exercise. A walk a day keeps the doctor away.”

Dolhare is an accomplished runner and credits the sport with saving her life. She is now on a mission to save the lives of others.

Running Works is her labor of love, her way of giving back and paying it forward.

“I believe that everyone has been given a gift that can be passed on to others—no exclusions,” Dolhare said. “All it takes is an open heart, a little patience and some willingness.

“Sports saved me, lifted me up and gave me strength at a time when I needed it most. I want to return the favor and believe in others when they don’t believe in themselves.”

Dolhare competes as an ultra-athlete for the Timex Multisport Team. She recently completed the Badwater 135, deemed as the world’s toughest footrace. The Badwater 135 starts in Death Valley below sea level and climbs to over 8,000 feet in elevation. Temperatures can be above 120 degrees during the race.

Dolhare, Perkins and 10 other volunteers welcomed the 18 RHM guests. The agency had seven staff members and two volunteers on hand as well, including the executive director, Grubb.

After running shoes, shirts and shorts were distributed, the group of almost 40 people went on a half-mile run/walk around downtown Salisbury.

Grubb said it was a great turnout.

“You can already sense the team camaraderie. The skills developed through running and being part of a team are important life skills.”

She said a running program could help shelter guests build endurance, perseverance and community — not to mention the self-confidence gained by setting and achieving performance goals.

“Several of our guests were high school and college athletes when they were younger,” Grubb said. “It was fun to reminisce with them about back in the day when life was easier and dreams were fresh. I feel that we can renew dreams as we run.”

Following the run/walk, RHM guests turned in their shoes and clothing to be laundered and saved for the next meeting.

Perkins said the group would meet every Wednesday and Friday afternoon.

“After the run, we will take up the clothing and shoes and have a life skills discussion on various topics,” he said.

On this first evening, Dolhare addressed the large group after they had changed out of running attire.

Hoffman added, “We want you to run together on other days too. Boost your friendships. Don’t let anyone say you can’t do this.”

Running Works team members have life skills sessions or workshops designed to prepare them for independent living. Topics covered range from health and nutrition to budgeting, achieving goals and managing anger. After attendance at four meetings, shoes and clothing can be earned and then become the property of the team members. Extras such as haircuts also can be earned with good behavior and discipline.

“I came for the shoes, but I got so much more,” Gilmer said. “My 4- and 6-year-old children are now runners, I have lost 100 pounds, and we found housing and a sense of community that I never had before. All of this in just the year and a half that I have been with Running Works.”

A lot of hopes and dreams were evident, both spoken and unspoken on this special night.

“Can’t is not in our vocabulary,” she said. “There will be no judging. We are just here to help others. It is hard to be grateful when life is so tough, but we can do it—one stride at a time!”