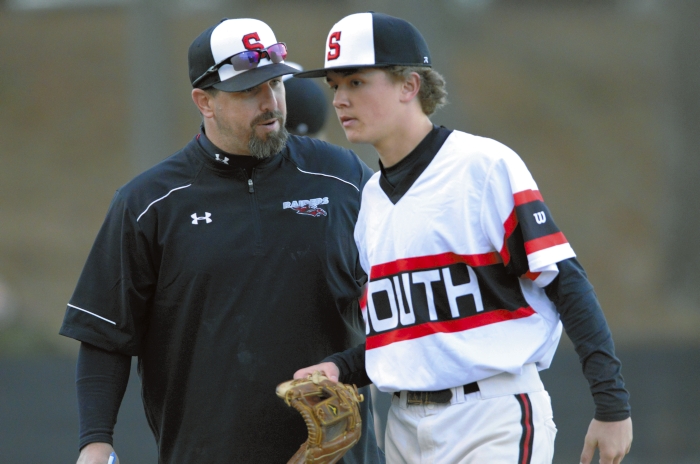 The game went like most South Rowan games have gone  — a lot of contact, a lot of singles, and a lot of smooth defensive plays.

It added up to a breezy, 9-2 win over Concord Jay M. Robinson (4-3), a 4A squad that will be coming down to join the Raiders (7-1) in the 3A South Piedmont Conference next school year.

Wyatt has an unusual haircut for a catcher and looks like a Bay City Roller who’s been transported from the 1970s to the present. Wyatt explained that his nickname was handed to him by Northwest Cabarrus’ Chandler Hubbard when they were teammates as 6-year-olds. It’s stuck for a long time. He likes it.

Wyatt is following two all-star catchers at South Rowan in Matt Honeycutt and Eric Tyler. Not many people had heard of Wyatt when this season started, but he’s been filling some big cleats.

“Eric and Matt were my role models, and I was fortunate that they took the time to work with me,” Wyatt said. “I don’t have to do too much. I’m on a good team with good pitchers.  I just try to do my job.”

Sophomore Walker Joyce was the winning pitcher in his first varsity start. Joyce didn’t allow a hit until Angel Hernandez blooped a double to right in the fourth. Joyce left with a 5-0 lead after tossing four shutout innings.

“Walker is a young guy and he can be emotional, so my job was to keep him calmed down,” Wyatt said. “He did great today. He threw strikes and let his defense work.”

South Rowan made things easier for Joyce with a four-run first inning. The Raiders loaded the bases with a walk, hit batsman and Peyton Penninger’s single. Bo Corriher’s single made it 1-0. Eric Stowe’s ground out made it 2-0. With two men out, Joyce helped himself with a solid hit to left, bringing home two runs.

“I was pretty nervous when the game started,” Joyce said. “But that first inning we had, helped and getting that base also made it better.”

South Rowan had 11 hits. There were 10 singles and Colson Childers’ double. Corriher, Blake Johnson and Childers had two hits each. The Raiders got three  hits out of the pitcher’s spot in the lineup. Norton and Fulcher both went 1-for-1.

Chrismon took the latest of his 100 wins in stride.

“A lot of good players and assistant coaches contributed to those 100 wins,” Chrismon said. “Joyce did the job tonight against a team that swings it pretty good.”

South Rowan, which has played six games at home, travels to face East Rowan at Staton Field on Wednesday. The Mustangs whipped the Raiders (10-run rule) in that park last season, on their way to the SPC championship.

That makes Wednesday’s matchup significant for the first-place Raiders, but Chrismon isn’t willing to call it anything special.

“Every game we’ve played in the SPC has been tough and every SPC game we play is equally big,” he said. “You can’t make one game bigger than another. When you start talking about how huge a game is, that’s when you play tight. We won’t make it more than it is. We expect a tough game and we’ll look at is as an opportunity to get better.”