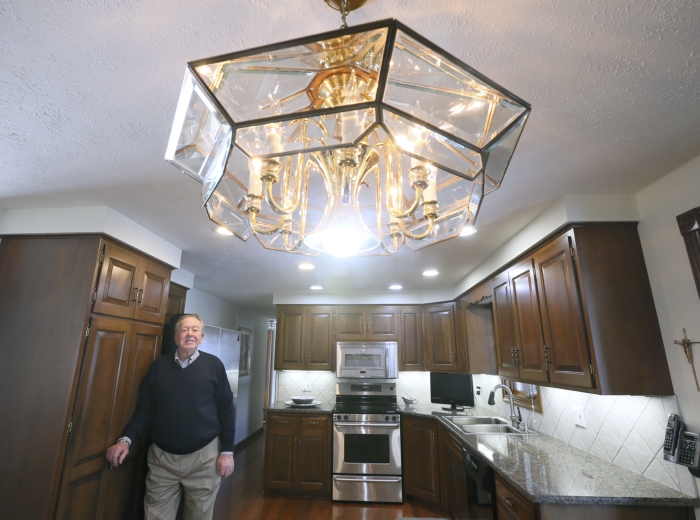 Homeowner Dave Lippert stands in his kitchen, which uses all LED lights, in Jackson Township, Ohio. Lippert, a retiree from the electric utility industry, started the project in 2012 as an experiment to switch to all LED bulbs and found it cut his electric bill more quickly than he imagined. (Phil Masturzo/Akron Beacon Journal)

AKRON, Ohio (TNS) — When Dave Lippert swapped the light bulbs in his house for energy-saving LEDs, he figured they’d pay for themselves in a little less than three years.

Turns out the break-even point came faster than he anticipated, leaving Lippert with even more money in his pocket. It’s a good case study for homeowners anywhere who are pondering the financial return on switching to LEDs.

Lippert, a retiree from the electric utility industry, started the project in 2012 as an experiment. He was confident the switch would cut his electric bill substantially, and he wanted hard evidence to win over skeptical friends and family members.

He spent $975 to replace almost all the incandescent and compact fluorescent bulbs in his 2,400-square-foot house with LED bulbs, donating the old ones to a church. His old bulbs used a total of 3,656 watts of electricity. His new bulbs use 638 watts to produce the same amount of light.

Then he closely tracked his energy use and costs, being careful not to add or subtract any electrical device in the house. That way, he could be reasonably sure any difference in energy use was due to the lighting.

When the Beacon Journal reported on Lippert’s experiment a year ago, he predicted he’d save enough in electricity to recoup his $975 investment by April 2015. But by the end of December 2014, he’d already passed that number.

That’s a 43.65 percent annual rate of return on his investment. “I have never found anything that returns this kind of money on a consistent basis,” he said.

If the bulbs live out their promise to keep burning for 25,000 hours, his saving would mount to about $8,500 in current dollars over 20 years, even if electric rates never increased. Since they almost certainly will, the amount saved would be even greater, he said.

And that doesn’t count the money Lippert is saving from not having to buy replacement light bulbs.

Part of the reason he saved more than he’d originally expected was a new, lower electric rate he locked into in the midst of his experiment. He figures that rate change accounted for a maximum of 3 percent of his saving.

He also pointed out that as retirees, he and his wife are home more and have their lights on longer each day than most working families. More electrical use brings a higher rate of return.

Still, Lippert is convinced that LED lighting is a money-saving choice for everyone, although he thinks a gradual conversion makes more sense for most people. He has been so impressed, in fact, that he started a business to sell the Viribright bulbs he has in his house, possibly through a home shopping outlet such as QVC.

His next project, he said, is converting his daughter’s home to LED lights.

His own switch-over wasn’t flawless. A couple of Lippert’s bulbs failed, but the company replaced them and has since corrected a design flaw that caused the capacitors to overheat.

And he still hasn’t found bulbs for a bathroom fixture that will suit his wife.

How they work: Electronic devices called light-emitting diodes light up when electricity passes through.

Drawbacks: Expensive, although prices are dropping. Not everyone likes their light quality.

What to know: Look for an Energy Star label, which indicates the bulb meets certain quality standards. Read the Lighting Facts label on the package to make sure the brightness and color of light are what you want.

Music, ghosts and food: Living for today in New…