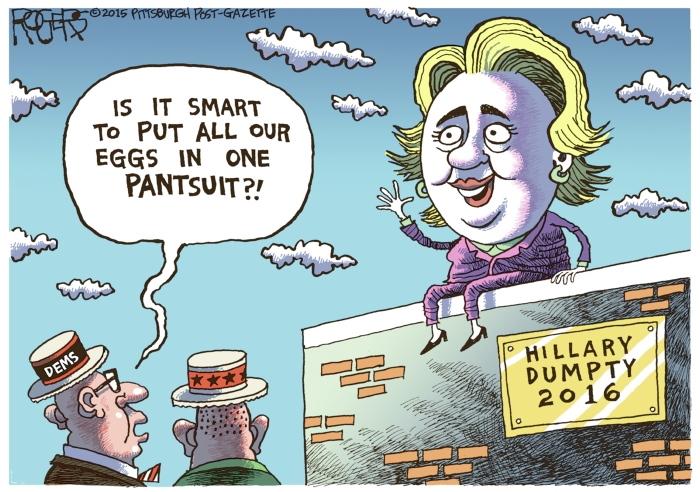 In many sports, there’s the notion of an unforced error. It’s something that the player did that costs the player or his team.

In the game of politics, politicians commit unforced errors as well. But when you’re talking about the ultimate prize of power, those unforced errors can be more damaging than a simple dropped shot.

Recently, there have been two major unforced errors committed by both sides of the political fence. While the scores may be different for both sides, the damage done shows the lack of strategy and, at its core, thinking by both players.

Hillary Clinton’s presumptive coronation as the Democratic nominee hit a snag due to circumventing standard e-mail service. One could imagine the rationalization of hosting her own e-mail server while secretary of state, considering what the former first lady went through with the Whitewater investigation that ultimately led to her husband’s impeachment proceedings.

With the past “vast right-wing conspiracy” having shaped her behavior, a private server to handle e-mails was probably seen, at the time, as a smart thing to secure control over.

But for someone who served in high office, it’s questionable why one would not have an official government account to transact business while having a separate email account for personal business.

Taking Clinton at her word only continues a trait that’s akin to her husband’s defense when he explained to a grand jury that he didn’t lie about the nature of his relationship with Monica Lewinsky: “It depends upon what the meaning of the word ‘is’ is.” While legalistic in nature, it defies the common sense test for most observers.

For average voters who aren’t of a partisan bent, it will be seen as a “Really, this is what they are arguing over?” For partisan players, however, you’ll see the standard reactions. “What’s the big deal?” Democrats say, while to Republicans it’s a constitutional controversy that requires additional hearings.

But Republicans are suffering from their own unforced error when it comes to passing the common sense test. The open letter signed by 47 GOP Senators to the Iranian leadership came as a sign of the continued partisan breakdown between the two parties and branches of government.

While the letter was seen by some as a “lesson in constitutional government” from the Republicans controlling the U.S. Senate, the tone and tact it took was more along the lines of arrogance and a blatant attempt to scuttle any deal reached between the U.S. and Iran.

The reality is that it made its signatories, and especially its author, U.S. Sen. Tom Cotton of Arkansas, appear as spiteful meddlers in foreign policy.

Granted, senators have their constitutional (and thus, legal) power to approve a treaty and, with their six-year terms, can outlive an occupant of the White House.

But their own majority may be short-lived in just a year and a half, with another third of the Senate seats coming up for election and GOP senators having to defend more than their fair share.

Blind arrogance of power, whether in terms of keeping e-mails and deciding what to release or openly flaunting senatorial power and prestige to a foreign nation, often backfires on those wielding the power.

But in this age of political polarization, should we really be surprised by these, and future, unforced errors? Not really, because these errors are due to the partisan nature of the players, and it’s the game of politics that ultimately suffers.

Dr. Michael Bitzer is provost and professor of politics at Catawba College.

This column is from the blog he writes for WFAE radio, The Party Line.