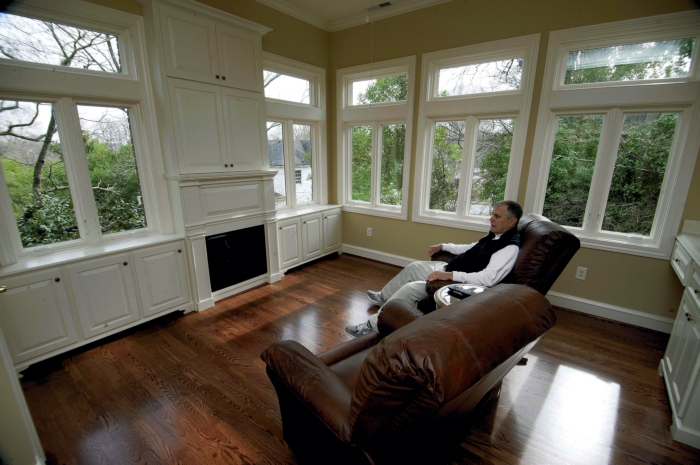 JON C. LAKEY / SALISBURY POST Ned Storey sits in one of the chairs in the new expansion to the master bedroom. Ned and Shully Storey with the help of architect Karen Alexander upgraded their long time home on South Fulton Street more accessible for them as they age. One of the key features for the upgrade is the electric elevator that will allow them easy access to the first and second floors from the basement garage.A flat roof patio was enclosed to house the elevator shaft and expand the master bedroom into a suite and living space. Thursday, March 12, 2015, in Salisbury , N.C.

When Ned Storey’s legs started giving him trouble, he and wife Shully decided not to move out, but to move up.

With the help of architect Karen Alexander and builder Bob Glover, owner of R&L Enterprise, Inc., the couple recently completed an upstairs addition to their beloved South Fulton Street home. The addition includes an elevator, so Ned can now move between the first and second floor with ease.

“We have wonderful neighbors,” Shully says. “We didn’t want to move.”

Because their den had a flat roof, they simply added an upstairs sunroom, thus providing space to install a small elevator. The plain elevator didn’t quite have enough panache for Shully, however, so Glover’s artisans recently installed handsome wood panels and rails in the small space. Now the elevator perfectly matches the new sunroom’s oak floors.

The new upstairs room is drenched in sunlight with windows on three sides. There’s also plenty of shelving and bookcases for Shully’s book collection. She’s a retired teacher and tutor, and Ned is retired from Carolina Color. The Storeys are waiting on furniture for the room — two comfortable recliners and a rug. There’s also space in the bookcase for a television, which is also in the way.

Another change the Storeys made was to move their laundry room from the basement to their new second-floor master suite. They didn’t want the master bath area, however, to look like a master bath. Instead, Alexander created a short hallway between the sunroom and the bedroom. Behind one door is an expansive tile shower. Behind another door is an enclosed toilet. The sink with vanity is just around the corner in the sunroom, and is situated against the shower wall.

The outside of the addition is just as beautiful as the inside, with dental molding to mimic that on the rest of the house.

The Storeys were impressed with the craftsmanship of Glover’s crews. On the ground floor, the crews replaced the heavy doors of the couple’s one-car garage. The couple hopes to donate the doors to the Historic Salisbury Foundation’s Architectural Salvage Warehouse.

Shully loves the fact that the elevator goes all the way to the basement. Now she can easily carry groceries upstairs instead of going through the front door.

This is the Storey’s second experience of working with Alexander.

“Karen did a bathroom for us several years ago, and that planted the seed,” Ned says.

Sam Trexler, who also built the Fairmont Terrace a block away, built the home in 1936.

“We’re the first family other than his family to live here,” Ned says. “He built it for himself, so he built it right.”

“One of the big challenges was keeping everything in the dry so you can keep everything going during construction,” Bob says. “Keeping the owners happy and safe is the main goal. They have been great to work with.”

The Storeys didn’t mind having workers in the house. Shully even baked her famous bar cookies for them a time or two. They plan to invite the workers — and their wives — over when the room is decorated.

“I want the wives to see what artists they are,” Shully says.

The couple, Bob says, “were willing to do things right — and they did it right.”

Besides the furniture, they have just a few more finishing touches to add to the room — including a doorbell that they’ll be able to hear in their new upstairs getaway.