A couple of clowns: Husband-wife team is double the fun 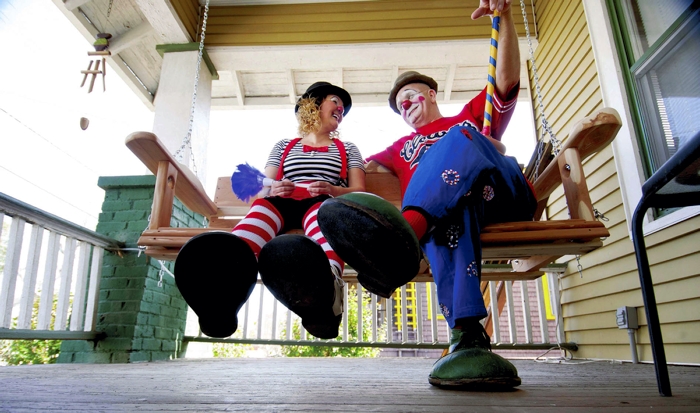 JON C. LAKEY / SALISBURY POST Husband and wife Eric and Kolinda Zander-Hussey are professional clowns known as EZ and KoZee who lived in Charlotte and decided to move to Salisbury after visiting the city during one of the Night Out activities.

SALISBURY — Years from now, 7-year-old Zelda McCoy will have many people gathered around her at parties as she tells them about growing up with neighbors who were clowns.

Just the other day, Zelda stood on the sidewalk near her house as clowns  KoZee and EZ gave her an impromptu performance. KoZee was tickling Zelda with a feather-duster, while EZ was juggling clubs, then getting her to giggle when his pants fell down — unexpectedly, of course.

EZ’s signature prop is a plunger — he can balance a stack of plungers 15 feet high on his red, rubber nose — but he and KoZee were just giving Zelda a brief sampling of their act before hopping on a tandem bike for an afternoon ride into the downtown.

Earlier, when EZ and KoZee were sitting on their swing, close to a sign that said “No peein’ off the porch, some other West Council Street residents walked up to say hello and comment that clowns relaxing on a front porch is not something they see every day.

“A lot of our neighbors don’t know what we do,” EZ said.

Not many people earn their living as clowns, and it’s even more unusual when husbands and wives do it full-time together, but Eric and Kolinda Zander-Hussey make it work.

Each has been a professional clown for more than 20 years, They teamed up five years ago, married two years ago, and they now try to schedule at least 300 performances a year.

Eric’s 2013 marriage proposal says a lot about their unique occupations. Kolinda flew into the Charlotte airport from her home in Mantioba, Canada, and Eric was on his knees, proposing, as soon as she was off the plane.

When Kolinda opened the box he was holding, it contained a ring with a clown nose as its stone. Kolinda loved it, as only a clown could. Later, as they waited for her luggage, Eric reminded her those rubber clown noses are removable. She lifted the nose to reveal a big diamond underneath.

Someone with a high school boys choir, just back from performing at Carnegie Hall, noticed what was going on between Eric and Kolinda. The boys soon encircled the couple and sang a beautiful rendition of “My Girl.”

“Then, I started crying,” Kolinda said.

To say Eric and Kolinda Zander-Hussey are clowns — and clowns only —  doesn’t do justice to their broad range of talents.

They’re also magicians and jugglers. They walk on stilts. They make balloon animals. They face-paint and teach others about clowning. Give Eric five minutes with a plunger, and he can give you a show that sells.

But as a married couple they’ve also learned to compartmentalize what they do for a living, keeping it separate from their lives as a newly married couple who love to travel, visit with their children and explore their new hometown.

Sure, clues around their cute, 1901 house suggest that clowns live here. A sign on their front door says, “This place is just a few clowns short of a circus.” Out back, a Ronald McDonald statue serves as a lawn ornament.

And the shed, where most people might keep their lawn mower, rakes and planting pots, is devoted to storing all of their clown props. Depending on what show they’re performing, they pull the props they need out of the shed and load them into their bright yellow van — bright enough that it’s probably another clown clue.

Inside the house, Kolinda has allowed one corner of the front room to be devoted to clown stuff, such as her silver and bronze performance medals from the World Clown Association. On a shelf is a framed photograph of one of  their daughters, who insisted on wearing a clown nose for her high school graduation picture.

A mantel also includes a ringmaster’s whistle from the Ringling Bros. and Barnum and Bailey Circus. Eric spent four years as a clown with the circus.

There’s a poster on the wall from when Eric worked the Adventuredome  theme park in Las Vegas. A corner clothes tree holds a bunch of crazy hats — a hat is a clown’s best friend, Eric and Kolina said. And on the floor are oversized clown shoes and brightly covered suitcases, the kind from which clowns always seem to be able to pull out the funniest things, like a flaming wallet.

Because their kids from other marriages are all grown, Eric and Kolinda say they are empty-tenters, not empty-nesters.

Renting a place in Charlotte after they married, the couple moved to Salisbury and bought a house here last October.

“We work from Charlotte to Greensboro, and guess what’s the in the middle?” Eric said.

Besides Salisbury’s central location, the couple also happened to be visiting the downtown during a busy First Friday when the theme revolved around children. “We said, ‘This is the place for us,'” Eric said.

In this region, EZ and KoZee perform at a lot of festivals, business events, fairs, birthday parties, school and library programs, Hornets basketball games, clown camps, parades and circuses. They also take their act elsewhere in the United States and in other countries.

In June, they are headed for an international clown festival in Japan, and they’ll be at a Worldwide Circus Summit in West Springfield, Mass. They are active in the World Clown Association. Kolinda is on the executive board for the WCA and will be this year’s awards director at the annual convention in Reno, Nev.

In schools, for example, where they often perform throughout the week, EZ and KoZee are asked to give character education or anti-bullying programs. But they say they can do anything.

“If you can dream it, we can theme it,” Eric said.

Asked to describe KoZee, her clown persona, Kolinda said she’s “a sassy girl who just likes to have fun.” She also enjoys putting EZ in his place. “He’s the funny one — I’m the cute one,” Kolinda said.

Eric described his EZ as everybody’s favorite uncle and maybe a bit cranky. “I will show you anything,” he said, even the pull-your-thumb trick, if you want.

Kolinda was a nursery school teacher when she made the transition into clowning in the early 1990s. She received such positive comments from her antics as an elf in a Christmas show, it led her into birthday parties and developing a clown program for nursery schools and daycares.

She recalls trying to find clowning instructions and checking out a book in her local library. “In the book it said, if all else fails, drop your pants,” Kolinda said.

She has found that to be good advice through the years, but as any clown knows, the timing has to be right.

Kolinda said she probably became hooked on clowning for good after taking a 10-week community college course. She began learning makeup, balloon animals, magic and costuming. Soon, she was a clown camp counselor and partnersin a clown instructional school. All along, she learned a lot from other clowns.

“She was already funny,” Eric said, before turning to Kolinda and adding, “You just had to learn the mechanics. She can do 20 minutes with dental floss. She’s the queen of bubbles, too.”

Over the years in Canada, Kolinda performed on television and in acts over four provinces.

“It’s the best job in the world to have,” she said.

Eric knew early on that clowning was right for him. At 19, he auditioned for Ringling Brothers’ Clown College but wasn’t chosen. He then joined the Navy, serving for four years.

He later waited tables, tended bar and even tried to be a stand-up comic. On one hand, “I knew I was the funniest waiter in New Orleans,” Eric said, but when it came to being a stand-up comedian, “I’m one of those guys who can’t wait to get up there and die again.”

He learned some things from a clown based in Jacksonville, Fla., and like Kolinda, he remembers checking out books on clowning from the local library. His first paying gigs were two birthday parties at $20 each, but he forgot to collect his fee each time.

“He’s not very good on the financial end,” Kolinda said.

Eric would not let the dream of being a clown die, especially after seeing a 20th anniversary television special about Clown College in 1987. At 29, he enrolled in Clown College without an audition and was one of that year’s 58 students. After 10 weeks, only 12 students would be chosen for the circus based on how the aspiring clowns performed in “the funniest final exam.”

“I knew I was going to be one of them,” Eric said, recognizing there was a clown inside of him waiting to emerge. “I just needed them to show me how,”

Four years with the circus followed, including a tour in Japan. Eric traveled next to Las Vegas, where he would spend a decade honing his skills. One of his first jobs was eight hours every day, walking through a casino doing impromptu comedy.

It was one of the best experiences he could have, Eric said, because everybody he met expected something funny from him.

“I had to do something fast,” he said. “That’s where carrying a plunger comes in handy.”

Eric improved measurably with juggling, balloon animal-making and stilt-walking. He honed his gag- and routine-writing, working for Circus Circus in Las Vegas.

He met Kolinda at the World Clown Association’s annual convention in Winnipeg.

“The first time we set eyes on each other, we were both clowns,” Kolinda said.

But it took eight months before their first date in New Orleans, then the courtship began.

Eric said the couple are working on  some new things for Japan in June. They also have been putting their dogs, Cricket and Shirley Feeney, through some paces to see if they can become part of KoZee and EZ’s act.

Even though they consider themselves world-class, “international” clowns, Eric and Kolinda welcome jobs as simple as a local birthday party. In fact, they’ll tell you a lot of clowning happens in people’s living rooms.

“To me, it’s an honor to be invited into someone’s home,” Kolinda said. “They all appreciate it. They all love it. Laughter is just one of those things that is universal.”

As they travel in their bright yellow van to their performances, EZ and KoZee attract plenty of double-takes from the motorists who see them.

The same is true when they take off for a ride over Salisbury streets on their tandem bike. They wave and laugh the whole way. Just stopping by the bank can be a jaw-dropping moment.

“We love being the new clowns in town,” Eric said.