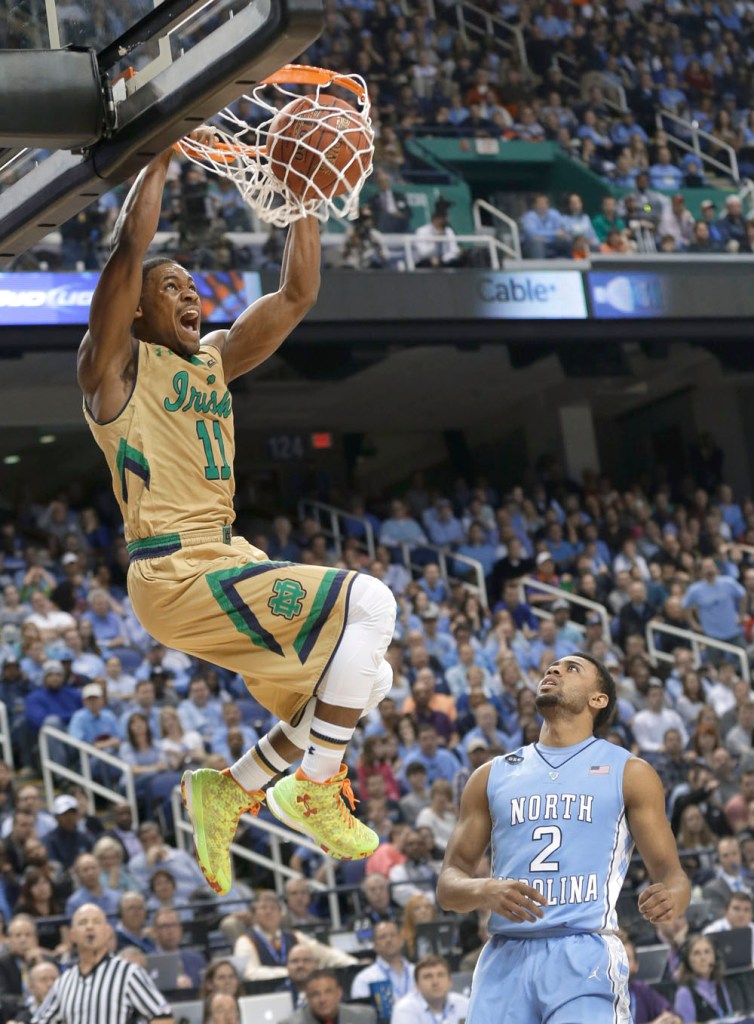 GREENSBORO, N.C. (AP) — Notre Dame coach Mike Brey walked right to Jerian Grant as the horn sounded and wrapped him up in a huge hug as the rest of the players rushed by them to celebrate on the court.

The wait was over. The Fighting Irish finally have a conference championship.

Grant scored 24 points and No. 11 Notre Dame took over with a 26-3 second-half run to rally past No. 19 North Carolina 90-82 on Saturday night in the Atlantic Coast Conference title game.

Pat Connaughton added 20 points for the third-seeded Irish (29-5). They went from trailing by nine to up double figures with a stunning burst that seized momentum in what amounted to a road game and sent the program to its first title in any league.

Connaughton came up with a pair of 3s during Notre Dame’s go-ahead run, with the Irish getting into a fast-paced, free-flowing attack set loose by a few ill-timed turnovers by the Tar Heels (24-11).

When it was over, Notre Dame had turned a 63-54 deficit into an 80-66 lead on Connaughton’s dunk with 2:54 and largely silenced a home-state UNC crowd featuring plenty of blue in the Greensboro Coliseum seats.

The Irish had been to six Big East Tournament semifinals in 18 seasons in the league but never reached the final, then bolted for the ACC before last season.

Notre Dame had reached the final with an upset of No. 2 Duke in Saturday’s semifinals. Coach Mike Brey said afterward “there would be no greater achievement in the history of our program” than to complete the title run, joking — or maybe not — that they would have to put an asterisk by it if they beat both Duke and North Carolina in their home state to do it.

Grant was selected the tournament MVP. He also had 10 assists and went 15 for 18 from the foul line.

Marcus Paige scored 22 of his 24 points after halftime for the fifth-seeded Tar Heels, who were trying to become the first team in tournament history to take home the title with four wins in four days.

Instead, as Notre Dame found its groove and started burying shots from just about everywhere, North Carolina suddenly looked lost.

UNC shot 58 percent after halftime, but just couldn’t keep up once Notre Dame got rolling.

The Tar Heels reached the final for the fourth time in five years by grinding its way through a quarterfinal win over No. 14 Louisville followed by Friday’s semifinal upset of No. 3 Virginia.

They left the court Saturday night still looking for their first ACC title since 2008.