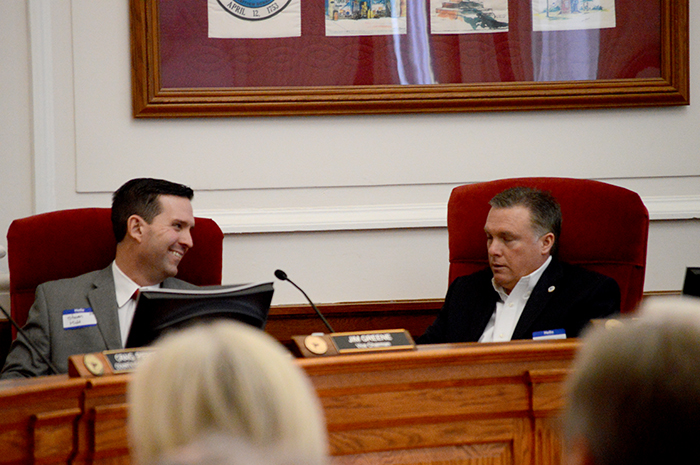 The Rowan County Republican Party elected Stephen Kidd as its new chairman on Saturday by a large margin.

The local Republican Party held its annual convention Saturday, which packed the Rowan County Administrative Building to its seams. Up for consideration during Saturday’s convention was the election of the county’s Republican leadership and at-large members. Kidd, a financial advisor, was the chairman for a slate of candidates proposed by an official nominating committee. A separate slate of candidates, which included Tom Speaks as its chairman, was proposed at the convention. The nominating committee’s slate won by a vote count of 83-47.

After his election, Kidd said his foremost, and only, priority would be uniting local Republicans.

“We have to work together and, as the chairman of the Republican Party, it is my job to make sure that we have as many people as possible coordinating together to bring our vote out and make sure that people are educated on the vote,” Kidd said. “There’s lots of viewpoints and lots of differences. Everybody has an opinion, and all of us have differing backgrounds, but ultimately we all have to come together as one party.”

Saturday marked the second time Kidd was picked for the top spot in the Rowan Republican Party. He also served as chairman from 2005 to 2009. This time, Kidd said the nominating committee asked him about being chairman multiple times.

“I kept telling them ‘no,’ but I understand exactly what I’m getting into and it’s a very challenging position,” Kidd said.

Other officers elected Saturday include: Terry Osborne as vice chairman, Daryl Cox as treasurer and Sandy Yon as secretary. The nominating committee’s slate of candidates was elected by a standing vote. The two separate slates were voted on as a whole rather than attendees picking a candidate for each position.

The voting method was a point of contention during Saturday’s convention. Voting delegates in favor of the nominating committee’s slate lobbied for the vote to take place by standing. Those favoring the nominating committee’s slate also asked for the vote to take place on the two proposed slates as a whole rather than voting on individual positions.

Rep. Harry Warren, R-77, began the election portion of the convention by announcing the nominating committee’s slate of candidates. Warren was one of three people appointed by outgoing Republican Chairman John Leatherman to the nominating committee. As he introduced the slate, Warren touted its credentials and said it represented a broad, geographic spectrum of the county.

Furr again spoke up, motioning that the convention vote on its leadership by slate, instead of by individual position. Warren agreed with Furr, saying that voting on individual positions could be problematic if a combination of both slates resulted. Coladarci said the alternate slate was willing to serve with anyone. He added that Saturday’s convention should include a “true vote instead of a coronation.”

A last effort by supporters of the alternate slate asked for a ballot vote. It didn’t receive enough support to change the voting method.

When a vote was called, a majority of the room chose to support the nominating committee’s slate, marking a change in the Rowan Republican Party’s leadership.

At large members elected Saturday include: