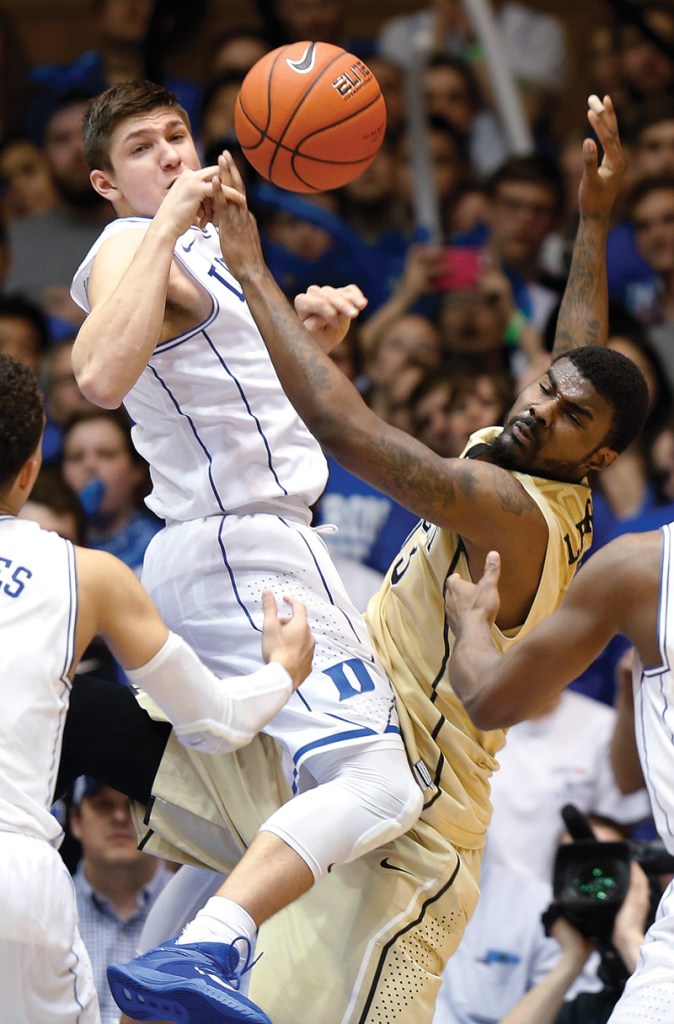 The Associated Press Duke's Grayson Allen, left, an Wake Forest's Darius Leonard look for a rebound during the second half Wednesday in Durham. Duke won 94-51.

DURHAM, N.C. (AP) — No. 3 Duke has been carried all season by one of its four freshmen.

Just never this one.

“It wasn’t really me waiting for a chance — it was me being able to translate it into the game from practice,” Allen said. “Coach has been giving me opportunities, and I was able to capitalize today. This is the type of game to get my confidence going.”

Matt Jones added 17 points for the Blue Devils (27-3, 14-3), who shot 58 percent and forced 19 turnovers in locking up the No. 2 seed in next week’s Atlantic Coast Conference tournament.

Duke had a double-figure lead before the Demon Deacons managed their first basket, scoring the first 12 points and rolling to their 16th straight home victory in the ACC’s oldest series.

Quinn Cook had 13 points in his Cameron Indoor Stadium farewell and Justise Winslow also had 13.

The Blue Devils didn’t need much from him at all.

Okafor has been the biggest name in a gifted freshman class of possible one-and-dones that also includes Winslow and Tyus Jones. One of those three has led the team in scoring in 21 of the first 29 games.

And then Allen got hot and upstaged everyone.

“He kills,” Okafor said of Allen in practice.

“Aggressive, freak athlete, strong guy,” he added. “He had no fear when he’s on the court.”

Allen’s previous scoring best was 18 points — but he blew past that by halftime, with 19 in just eight minutes.

“From that moment, I kind of knew I was feeling it a little bit,” Allen said.

His free throw with 58.5 seconds before the break put Duke up by 30 at 45-15 and led the Cameron Crazies to chant “Grayson’s winning.”

The other four-pointer came when Tyus Jones banked in a 3 at the buzzer through contact from Madison Jones, then hit the following free throw to make it 52-15.

Mitchell Wilbekin, who had 11 points, was the only player to score for Wake Forest in the opening 11½ minutes — while the Demon Deacons fell behind 31-5.

“It’s a simple game to talk about,” coach Danny Manning said. “Duke came out with a lot of energy and a lot of effort … and we had a very disappointing showing.”

Dallas Cowboys quarterback Tony Romo, coach Jason Garrett, tight end Jason Witten and AP Offensive Player of the Year DeMarco Murray had seats behind the scorer’s table. And then the Crazies chanted, “Tony Romo, sit with us” — and the QB obliged, heading into the Duke student section at the next-to-last TV timeout. It marked the second straight year Romo and Garrett caught Duke’s home finale — they also were here for last year’s victory over North Carolina.

Wake Forest: This marked the Demon Deacons’ fifth consecutive loss at Cameron by at least 18 points.

Duke: The Blue Devils’ 15 points allowed in the first half was a season best. … Allen finished with four 3-pointers and hit 9 of 11 shots.