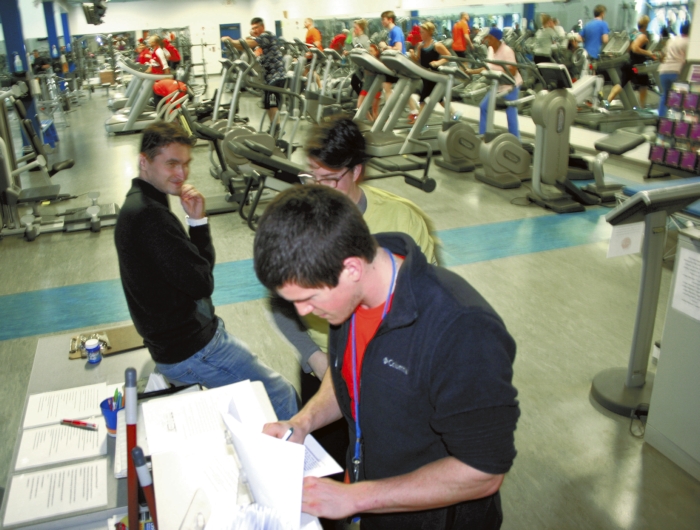 Alex Rollins, the Y's aquatics director, signs up to participate in the contest. Susan Shinn, for the Salisbury Post.

Are you ready to move to make a difference?

Beginning Monday, members of the J.F. Hurley Y will be participating in a worldwide contest, “Let’s Move for a Better World,” sponsored by Techno Gym, which has numerous pieces of equipment at the Y. The contest ends March 22.

The first-place winner in each of the 10 participating countries will receive exercise equipment for a local school, and the Hurley Y has chosen North Rowan Middle School.

“That’s awesome!” said Meredith Williams, one of the school’s assistant principal. “We appreciate community support of any kind.”

The way the contest works is this: Y members use their Techno Gym keys to record their workouts and “moves” earned. For example, I worked out on the Techno Gym elliptical on Saturday morning and earned 970 moves in 45 minutes. Tammy Swicegood, a member of the fitness center staff, earned 1,110 moves in 45 minutes of running on a Techno Gym treadmill.

“If you push hard, you get more moves, which means you’re burning more energy,” Marsh said.

“We need every move!” Swicegood said, toweling off after her workout.

The goal to reach to be able to donate equipment to North Rowan Middle is one million moves.

It seems like a lot of points, but then again, the Y has a lot of enthusiastic members and staffers.

If Marsh runs out of keys, not to worry. She’ll have extra keys on hand for folks to borrow and record their workouts.

Last year was the first year for the Let’s Move campaign, which is aimed at fighting childhood obesity.

Marsh has planned a North Rowan Middle School family night at the Y.

“My daughters went to North Middle,” Marsh said, “and the school is really trying to change its culture and get more community support. Middle school is a good time to make healthy lifestyle changes.”

Marsh explained that, North Middle would receive an “instant gym,” a circuit set of hydraulic equipment that’s similar to the equipment upstairs in the fitness center.

Marsh said she’d asked members who typically walk or use other equipment to use solely Techno Gym equipment during the contest period.

Claire Kleiber typically walks on the track upstairs, but told Marsh she’d walk on the treadmill to participate in the contest.

“So that was exciting to me,” Marsh said. “Anything that gets people to exercise is what I am for. I want you to come to the Y. I want you to get healthy.”

North Middle’s Principal Alexis Cowan is thrilled about the contest.

“It’s an excellent opportunity to network with the Y and get our parents and students involved,” Cowan said. Reaching out to the school will create a healthier student population and in turn, a healthier community, he said.

For more information, sign up with Marsh or a member of the Y’s fitness center staff.