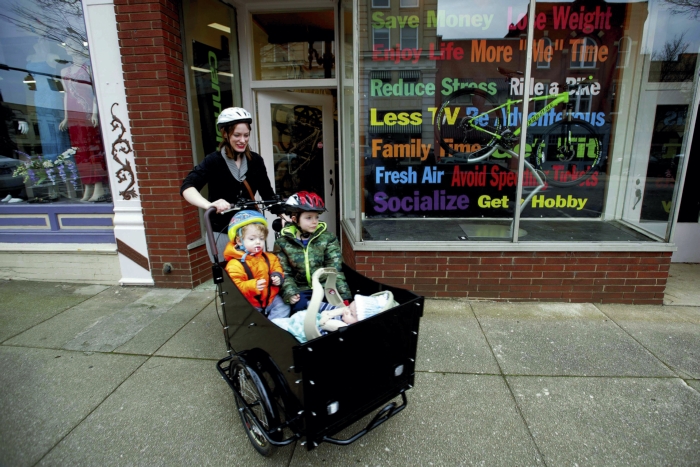 JON C. LAKEY / SALISBURY POST Nichole Robinson prepares to take her three children Liam, Mac and Jack out for a ride in the families new cargo bicycle. The new cargo bike was being tweaked at Skinny Wheels in downtown Salisbury. The Robinson family (along with Nichole's husband Dr. Jed Robinson) have recently move to Salisbury from Oregon which has a thriving bicycling following. The Robinson's hope to use the cargo bicycle for ferrying to the kids to preschool and trips to the grocery store.

“People probably wonder if they are seeing a wheel barrow attached to a bicycle,” she said.

Along with her three small children, Robinson has been pedaling between her home on Old Mocksville Road and other points around town on her cargo bike.

She and husband Dr. Jed Robinson, a specialist in rehabilitation medicine for Ortho Pinnacle, wanted to move to North Carolina from San Antonio. They were looking for a certain type of small town.

“We lived previously in Portland, Oregon, and seldom used a car,” she said. “We rode bikes everywhere. The city was connected by bike ways and greenways. Our commute to jobs and the grocery store was six miles, and we never drove.”

The Robinsons are part of a growing trend across the nation that finds young couples and others with active lifestyles seeking out communities that cater to cyclists.

“We lived for four years in San Antonio, where it was dangerous to be a pedestrian,” she said. “Jed actually saw in his practice the results of car versus pedestrian collisions, and we knew we had to find a better home for our family.”

While searching for the right town for their new home, certain specifics were on the list.

“We wanted the small town atmosphere. Doctors are needed everywhere, but the town had to feel just right to us. We had to be able to bike and wanted the cost of living affordable,” Robinson said. “We looked at Chapel Hill, but then we found Salisbury and knew right away that it was the right place because there is the potential to bike. Also, for a town this size there is a huge art scene. We love the theaters.”

With a family that consists of an infant, a toddler, and a 5-year-old, Robinson has her hands full on most days. However, they love to go on cargo bike rides. Mac, the 5-year-old, is already an avid cyclist, so he often rides his own bike. Liam, short for William, is 19 months old and gets buckled into the cargo bike, as does the infant car seat for baby Jack, soon to be 5 months old.

“They all love to go for a ride on the bike,” she said. “My kids hate the car, and I don’t like driving. I am going to end up very fit.”

“What I hope to see are more improvements in Salisbury infrastructure so that it is safer and more inviting to cycle in town, especially for women and children,” he said. “I am certain we will continue to see more involvement. The Salisbury Bike Coalition has a goal of increasing ridership and with that more ridership focused on transportation. Lots of good things are happening. The Carolina Thread Trail has been approved by all 11 municipalities and is awaiting county approval.”

Already, Nichole Robinson is venturing out on the bike and exploring best routes to certain sites as she builds her leg muscles.

“The bike and the kids are heavy. I expect that their weight added to the bike itself totals about 200 pounds. The kids move around a lot and I have to counter their weight. We have been exploring the greenways and then on to Overton Elementary and St. John’s pre-school. We like Fulton Heights as well. There is a playground where we want to spend some time that is just across Mahaley on that part of the greenway,” she said.

“Salisbury has tremendous potential. It can attract more active-lifestyle people,” she said. “I want people to see us out around town. Drivers have given us plenty of room for our cargo bike on the streets in Salisbury. Our goal for Salisbury includes more year-round connected cycling routes. Then, maybe more people would try cycling to and from work and for different errands. People drive very differently when expecting bikes. We know that from our experiences in Portland and San Antonio.”

Another recent arrival in Salisbury agrees. New Farmer’s Market and Bread Riot Manager Eric Bowen arrived in town from Durham about six weeks ago. He calls Salisbury “potentially the most bike friendly place with the fewest bikes on the road that I have seen.”

“It is easier to get around here than it was in Durham. Streets are wider and flatter,” he said. Still, he sees room for improvement. “We need bike parking downtown and we need bike lanes. Motorists will have to slow down if we want to build a new economy and be attractive to young and active people.”

Bowen lives in Fulton Heights and bikes to the grocery store and downtown. He often pulls his 19-month-old daughter in her own covered trailer behind his bike.

“People think she might be cold, but she enjoys it,” he said. “We prefer to just use the car on weekends or when we have longer trips.”

Phillips said that if more local residents are able to take shorter trips by bike, “it will positively affect our air quality, parking situations, traffic congestion, obesity, mental health, personal finances, and relationships. You will start to see a more vibrant community and a whole new demographic will want to live and visit here.”

“The proposed plan for Innes and Long Streets focuses on safety, better health and lowering transportation costs by providing alternatives,” Phillips said. “In turn, this will stimulate the local economy and give people a sense of place, where people want to be, causing property values to rise and crime rates to drop.”

As Nichole Robinson prepared to head out on another ride, she said, “It’s about a lifestyle that we have an opportunity to show our kids. What we hope for is to show them that it is doable to combine exercise and transportation.”