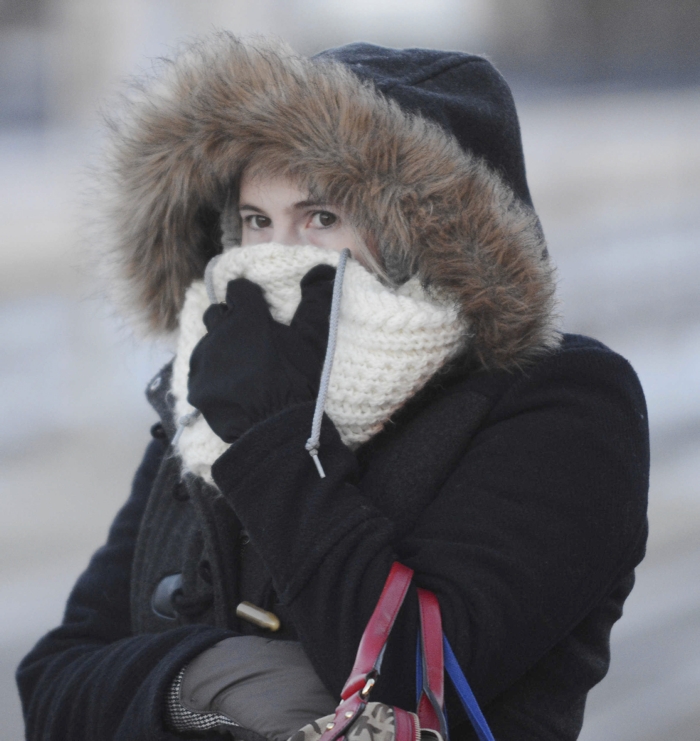 Commuter Carrie Bauske of Arlington Heights, Ill. waits for her train to arrive at the Arlington Heights Metra station as a cold snap took hold in the suburbs of Chicago on Thursday, Feb. 19, 2015. (AP Photo / Daily Herald, Joe Lewnard )

The bitter cold that has gripped the eastern U.S. is showing no sign of letting up before the weekend as low temperatures broke records Friday.

The newest band of Arctic air could plunge parts of the Southeast and Mid-Atlantic into deep freezes that haven’t been felt since the mid-1990s, according to the National Weather Service.

The cold snap followed snow and ice storms earlier in the week. The low temperatures caused much freezing and refreezing of snow, ice and roads. Weather forecasters warn that more sleet and freezing rain will be possible in the coming days.

Here’s a look at the latest weather and the effect it is having around the country:

YOU THINK IT’S COLD WHERE YOU ARE?

Temperatures dropping close to 0 degrees at home? That’s nothing to folks in Embarrass, Minnesota.

On Thursday, the community reported a temperature of 41 below zero — without the wind-chill factor.

Elsewhere in Minnesota, it was 31 below zero in Ely and Fosston, and 28 below at Bemidji.

The National Weather Service issued a wind-chill advisory for parts of the state.

Bitter cold temperatures have shattered decades-old records in many places — including  Washington, Baltimore and New York.

The National Weather Service said the low Friday got down to 6 degrees at Reagan National Airport, just across the Potomac River from Washington. That beats the record low of 8 degrees, set in 1896.

At Baltimore’s airport, the temperature dipped down to 2 degrees. The record was 4 degrees, set in 1979.

In western Pennsylvania, temperatures dipped to minus 18 in New Castle, minus 15 in Butler and 6 below zero in Pittsburgh — all records.

At Newark Liberty International Airport in New Jersey it was 1 degree Friday, beating the record of 5 set in 1936. Trenton’s temperature fell to zero and beat the low of 6 set in 1936.

In New York, a record was set in Central Park. The temperature at 7:01 a.m. Friday was 2 degrees. The previous record for the date was 7 degrees, set in 1950.

Delaware State Police say at least 16 children suffered minor injuries when three school buses they were riding were involved in a chain-reaction crash.

It happened about 4 p.m. Thursday on Adams Road in Bridgeville. Troopers say three school buses were traveling north when the first bus slowed because of icy road conditions.

Officers say the third bus slid on the ice and rear-ended the second bus, which then hit the first bus.

Authorities say the buses were carrying 3rd- to 5th-grade students from the Woodbridge School District.

Police say at least 16 children were taken to area hospitals. The bus drivers were not hurt.

Troopers say no charges are expected to be filed.

BACK TO SCHOOL IN CHICAGO

District officials ordered a cold-weather day for Thursday, when temperatures stayed in the single digits. The wind made it feel like temperatures were double digits below zero. Numerous other school districts were also shut down.

The weather service is forecasting high temperatures near 20 in northeastern Illinois for Friday, with wind chills near 15 to 25 degrees below zero in the morning. They are also forecasting light snow, with little or no accumulation.

Firefighters in Revere, Massachusetts, rescued a man and his two dogs from an icy marsh.

Authorities say the dogs ran into the marsh Thursday morning and became stranded when a piece of ice they were on floated about 500 feet from the shore. The man tried to rescue the dogs, but got stuck in waist-high water and started having chest pains.

Firefighters pulled the man to safety and brought him to Massachusetts General Hospital. His name and condition haven’t been released.

Rescuers then used an ice sled to retrieve the dogs from the floating ice. One of the dogs was uncooperative at first and bit the hand of a firefighter, who wasn’t seriously hurt.

The dogs are OK.

In South Carolina, the start of the three-day Bassmaster Classic is being delayed about 90 minutes, pushing first launch to about 8:30 a.m. Friday when temperatures are forecast to be 17 degrees.

Still, the competitors will cast their lines amid finger-chilling temperatures when they head out on sprawling Lake Hartwell, located along the border of South Carolina and Georgia.

Police looking for man believed to be involved vehicle…