Putting the ‘joy’ in Joynt Camp 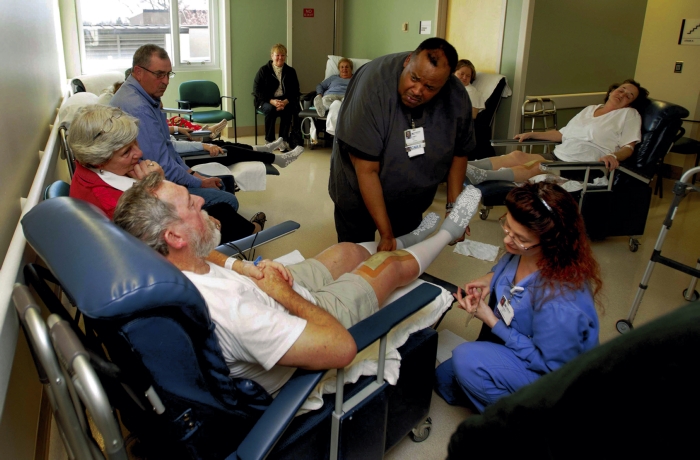 JON C. LAKEY / SALISBURY POST James Miles helps knee replacement patient Tom Waller during his physical therapy at Joynt Camp. Miles, a certified nursing assistant at Novant Health Rowan, has been using his out going demeanor to cheering on the patients recovering from knee, shoulder and hip replacement surgery. The hospitial opened the Joynt Camp in 1985 and hand picked 10 people to make the program a success. After 30 years, Miles joins two other original nurses that still help the patients start their recovery off on a good foot. Wednesday, February 11, 2015, in Salisbury, N.C.

SALISBURY — All of James Miles’ campers, just a day or two removed from hip or knee replacements, are sitting in a circle and ready for exercise.

By now they know the sturdily built Miles for what he is — an instigator, a singer, a comedian, a preacher and a cheerleader.  Before the ankle rotations, buttock squeezes, quad stretches and leg raises start, Miles tells his followers to be prepared for his reflections on world hunger and world peace.

“It gets a little deep,” says registered nurse Lisa Harrison, who has been a part of Joynt Camp with Miles and night nurse Linda Basinger since it started 16 years ago.

But Miles’ energy during the twice-a-day group sessions helps in taking the patients’ minds off some of the pain, which Miles tells them does not exist. There’s only pressure, he says.

Miles wants to know how many of his campers went back to their rooms that morning and did more of the exercises they had practiced. He jumps in and answers his own question, going down the line of faces and shaking his head in mock disappointment.

Miles also lays some ground rules for the campers before the afternoon exercises start: “I will not cuss James, I will not hit James.”

And so it goes for the best part of an hour at Novant Health Rowan Medical Center’s Joynt Camp. Most of the patients have had their knee or hip surgeries on either Monday or Tuesday morning, and the Joynt Camp’s staff’ makes it their mission to get them moving almost immediately.

The campers usually go home Thursday or Friday afternoons, depending on the day of the surgery, but Miles, Harrison, Basinger and others on the Joynt Camp floor have enough time to make a lasting impression.

Head is what Miles and Harrison like to call a “repeat offender.” It’s said with love.

Head attended Joynt Camp four years ago when she had her right knee replaced. This time, it’s her left knee, and she thinks the recovery has been a shade tougher.

There’s a good dose of irreverence, says Susan Waller, whose husband, Tom, has had three knee surgeries in the past six months. Harlen Hedgecock of Trinity, who received a total hip replacement, calls it “tough love.”

But the campers think the needling gives them an edge as they grit their teeth against the post-operative stiffness and soreness.

One of the exercises Miles demands is a buttock squeeze. You squeeze your behind cheeks together, then release.

“You release anything else, and you will be asked to leave the room,” he says.

Miles promises his campers they are are competing for a $75 gift certificate. They aren’t, of course.

“We’re so proud of each and everyone of you,” Miles says. “To show our appreciation, we’re going to send you a bill.”

It’s not unlike a comedy club routine, and Miles doesn’t let up. To get a rise out of the women and inspire more repetitions, he often insinuates they are inferior to men. He tells them they were meant to clean and scrub floors — that’s why they have to get better.

“Didn’t you read that in the good book?” he asks. “And men were created to golf and fish.”

“We were hand-picked — the original 10 — because it had to work,” Harrison says.

Overall, Miles and Harrison are celebrating their 30th year together at the hospital, and they both have devoted most of those three decades to orthopedics.

The idea for Joynt Camp came from Dr. Chip Comadoll, who had heard of this camp approach to recovery taking place at a hospital in Clearwater, Fla. Harrison recalls she and Miles went to Greenville, S.C., to visit another hospital with a similar program at work.

Today, Harrison thinks Novant Health Rowan has the last Joynt Camp still in operation. It has changed over the years, but Miles and Harrison still believe in the concept.

“It’s a quicker pace, but they do much better,” Harrison says.

The Joynt Camp floor has 17 beds, and most of them are usually occupied.  Miles and Harrison average seeing 400 to 500 campers per year, and “they come from everywhere,” Miles says.

Harrison says it sometimes seems as though the camp has done all the knees and hips in three or four counties. A fair number of patients also have been from out of state over the years because they come to be with relatives who can help with their rehabilitation once they leave the hospital.

“You meet all kinds of people,” Miles says, and they all have different thresholds for pain and working to improve their mobility. He and Harrison laugh, remembering the woman who said she was going to call in Hospice.

Another camper asked Miles to call the funeral home because he was dying. Miles said he would not allow that to happen because “I would have to wash you up, tag your toe, and that’s a lot of paperwork.”

When he hears too much moaning and groaning, Miles says, he gives the campers a benediction. He also likes to kid the widows about helping to find them a new husband, whom he always refers to as Mr. Green

For the widowers, he offers to match them up with the fictional Miss Red.

Harrison says Miles, a certified nursing assistant, is the pot-stirrer, but a much beloved pot-stirrer.

“It does work,” she says. “They get to laughing, and they forget about the pain. His part of the therapy goes a long way with the patients.”

“The “joy” part of Joynt Camp was chosen purposely 16 years ago. Miles and Harrison want the campers to have fun and realize that with their hard work at physical therapy they are just weeks away from returning to a full life.

The Joynt Camp process actually starts two weeks before the operations. The soon-to-be patients meet in a group setting, receive packets of information and learn what to expect in therapy and recovery at home after they leave the hospital.

Joynt Camp “graduation” comes right after the campers show they can manage going up and down steps. Miles hums “Pomp and Circumstance” as they leave.

For all the needling they do with the campers, Miles and Harrison say their main mission is to be upbeat, positive and encouraging.

“It’s necessary,” says Barbara Sloop, who had her hip replaced. “I knew it was going to be painful, and I don’t think we could get along as well as we do without him.”

It’s usually by the third week after patients leave the hospital and Joynt Camp that “they see the light at the end of the tunnel,” Harrison says.

But they never forget Miles.

As an afternoon group session ends, Miles leaves the exercise area and accompanies Reichert as she makes the long walk down the hallway to her room.

And Reichert believes it.