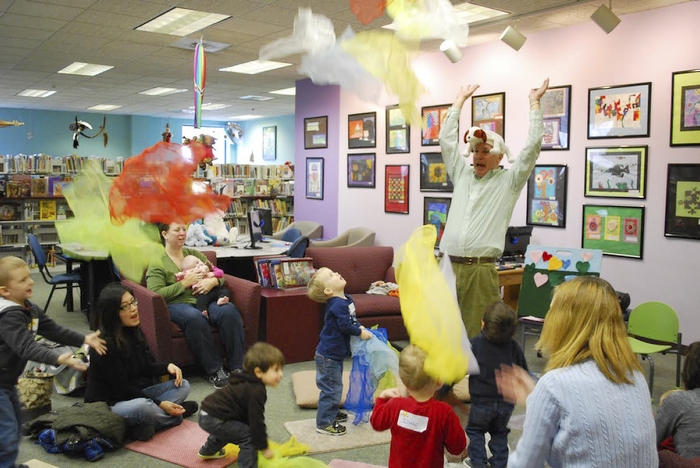 In between books, songs are sung, kids dance, scarves are thrown, and it's okay to be loud at Robert Jones' Rowan Public Library storytimes. In fact, the librarian is usually the loudest person in the room. 'Robert reminds us that we can be loud and funny when enjoying books,' said Melissa Oleen, youth services supervisor at Rowan Public Library. Elizabeth Roy/For the Salisbury Post

The library experience many of us envision is quiet, solitary, and involves relative stillness. It’s a tranquil picture.

And when children’s librarian Robert Jones enters the room to begin his story times for children ages 2 to 11 at Rowan Public Library, all of those notions go out the window.

“He is a bundle of energy during programs, and draws the children into his stories,” said Erika Kosin, library services manager for Rowan Public Library.

Known to the children as “Mr. Robert,” Robert delivers his story times with gusto. He does voices for all of the characters in the books, and brings the age-appropriate reads to life through props and activities. In many ways, he’s a one-man theater.

In between books, songs are sung, kids dance, scarves are thrown, and it’s okay to be loud. In fact, the librarian is usually the loudest person in the room.

Further fueling the children’s imaginations, Robert wears several hats over the course of each story time, each hat in theme with the stories being shared. At Tuesday’s toddler story time, Robert wore his bird, dinosaur, and puppy hats, as well as a magic hat with a rabbit popping out of it.

“We try to make this room a positive, fun experience,” said Robert. “You just want kids to love the library and love books.”

While the extraordinary energy levels are likely an unexpected bonus for parents and kids new to Robert’s story times, the most surprised person in the room may in fact be Robert: Never did he expect that he would become the children’s librarian and story time institution that he is today.

A Salisbury native, Robert, 58, worked as a teacher’s assistant for several years after graduating from Appalachian State with a degree in sociology. From there he worked the gamut of professions, from bartending to farming, construction to bread baking. And after 16 years of that, Robert was ready for a change.

It was pure luck that Rowan Public Library had an opening in circulation, Robert says. “I always went to the library but I never thought about working at one.”

Three years into his employment, Robert, who never had formal training as a librarian, was encouraged to become a storyteller by his then-supervisor Marian Lytle, library services manager for the library.

“Since he is a natural cut-up and ham, I knew he had what it takes to put together a program,” said Marian. “Robert has the ability to connect with people regardless of age.”

“About two thirds of the way through I completely forgot what happened next,” said Robert. “But by the grace of God, at the last minute it came to me.”

After a bumpy story time or two, Robert was given the advice to just have fun with it. And that, Robert says, was the best possible guidance.

Fifteen years later, Robert has seen countless toddlers turn into readers, and then grow into young adults. And they all love to come back and see Mr. Robert, Erika says.

Woven seamlessly into Robert’s story time fun are a multitude of educational exercises, from color recognition to counting to the simple practice of the children taking turns placing cut-out figures on the felt board.

“There’s always a certain level of teaching going on,” said Robert, who has learned over the years the benefits of encouraging children and letting them contribute.

“Robert reminds us that we can be loud and funny when enjoying books,” said Melissa Oleen, youth services supervisor at Rowan Public Library.

“The work we do is serious – developing future readers – but Robert truly makes it fun and not seem like so much work.”

Two budding readers and story time regulars, Riley Overcash, 2, and his 1-year-old brother, Wyatt, followed Mr. Robert with wide eyes at Tuesday’s story time. Their mother, Taylor Overcash, attributes much of her children’s interest in books to their visits to Mr. Robert.

In a typical week, Robert delivers five story times to church preschools, along with his three scheduled weekly story times: toddler, preschool, and “Noodlehead” story time for children ages 4 through 8. And all of this is in addition to his work assisting parents and children who visit the library’s children’s room.

“Robert’s storytelling is an art form, and the other part is that he loves it,” said Pam Bloom, fellow children’s librarian at Rowan Public Library. “Kids know when something or someone is genuine, and they respond to that.”

As for the old edicts about being quiet and still in the library, Robert will continue to pay them little – or no – mind.

“Oh I break all the rules,” Robert said with a chuckle. “You want the kids to love books. That’s the bottom line.”