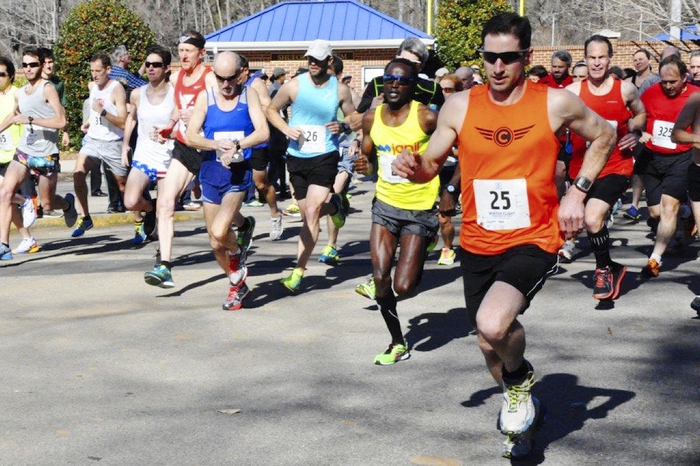 Eliud 'Heldy' Ngetich (in yellow top) starts out the Winter Flight 8K on Feb. 8. Ngetich broke a 27-year-old course record for Winter Flight with a time of 23 minutes and seven seconds. Photo by Brittany Holt.

I was excited from the day that Kenyan Eliud Ngetich contacted me about Winter Flight 2015. After reading his running resume, I knew he would have a shot to break the longstanding course record set 27 years ago. The Salisbury Rowan Runners had upped the prize money for this year specifically to attract someone capable of beating an already very fast time.

Once we agreed that Eliud was coming to Salisbury, I asked him for more details about his life, and we spent the week exchanging e-mails before his Feb. 7 arrival. Eliud lives in Jacksonville with a host family, after spending about three weeks in New York City. He didn’t like the Big Apple’s cold weather and heavy traffic that hampered his running. Eliud is from Eldoret, Kenya, and the Kalenjin tribe. There are 49 different tribes in Kenya, and the Kalenjin are known worldwide as the best middle- and long-distance runners.

Eliud’s family survives by raising livestock and hunting. He remembers herding livestock and being sent alone on 150-mile, multi-day trips to deliver messages as a small child. He was considered the family’s messenger, even though the only transportation was his feet. Eliud has 17 siblings.

Eliud arrived at the Charlotte airport at 4:20 p.m. on Saturday afternoon. Worried that I might not recognize him, I had a sign with his name on it. That sign never was used, because we spotted each other right away. We both smiled and started talking immediately, probably communicating about 70 percent of what we wanted to say. He talks fast (same as he runs), and I talk much slower (and run much slower), but somehow it worked. Only a few times did either of us totally get lost and ask the other to repeat what he had said.

We headed north to Davidson College. I have basketball season tickets there and had asked Eliud earlier in the week if he wanted to go to a game. Even though he replied very positively about seeing the game, I was still worried whether he would like it. On the way, Eliud asked me about food or “snacks.” He wanted pasta but was willing to settle for snacks. My main worry is that if I didn’t get him the food that he needed, he might not get that new record. So I was determined to work hard to find what Eliud wanted.

After a stop at a restaurant with a line that would require a 45-minute wait, we headed for the grocery store. Eliud got two 8-inch subs at the deli along with a diet coke and water. Within 10 minutes, he had devoured all of it and we headed into the game.

After introducing Eliud to several of my friends, he was the hit of the evening. They all wanted to know more about him. I quickly realized that Eliud’s ready smile and gentle demeanor drew others to him. But once the game started, I still was worried that his first college basketball game would not be interesting. Many years ago, I was in Green Bay, Wisc., for a winter and everybody there was excited about hockey. A friend took me to a game, and it was the longest two hours of my life. Davidson had a big night shooting three-pointers and blew away Duquesne. Eliud was very intent on the game and made all the right comments.

We left a few minutes early, headed back to Salisbury, with me telling Eliud, “We will be back in town by 9:30.” His reply was short and sweet, “So, when are going to eat?” A visit to DJ’s got Eliud his pasta and a salad. He was set for the evening on food. At least, I am pretty sure he was. He might have snuck over to Ryan’s buffet later.

The Salisbury Inn on Klumac Road graciously donated a suite with a Jacuzzi for Eliud. The desk clerk welcomed him in a big way and told him about the breakfast for Sunday morning. All seemed well, and finally I headed home content in the belief that Eliud’s 116-pound racing engine had the fuel that it needed for the record-breaking chase.

Eliud acquired the nickname “Heldy” because he was the fastest elementary school runner in the 6.2-mile race held locally in Eldoret, and he says that his parents even call him by that name. I did the same.

Heldy had graduated from high school, briefly putting running on the back burner while he played soccer. Heldy also became a Kalenjin warrior upon spending two months in the deepest mountains and enduring “some of the toughest times in my life.” He has spent brief times in Kenyan running camps with the hope of eventually making it as a professional runner. Long-lasting injuries have derailed Heldy’s training on two occasions.

Since 2013, Heldy has been racing in the United States and doing very well. He trains as often as three times a day; therefore he truly does practice my own favorite motto: “Eat, Sleep and Run.”

On Sunday, I was one of the hundreds who watched time clocks ticking away while Heldy was pushing for the course record. This confident young man had calmly told me he would break the record and would run just over 23 minutes on the very challenging course. And that is just what he did! It was one of the most electrifying athletic events I have ever witnessed as he entered the track at Catawba’s Shuford Stadium almost exactly on the pace that he planned, then sprinted to his 23-minute and seven-second finish. The old record was blown away by 28 seconds, a huge margin in middle-distance racing. Once USATF paperwork is completed, Heldy will own the state record, as well.

With rock star status, Heldy posed for photos, signed race numbers and talked with spectators who realized that they had just witnessed something very special. It was as if he became one of their own, happily chatting and smiling with anyone who sought him out. Runner Laurie Ward said, “He has such a wonderful personality and is so very humble!” I couldn’t agree more.

Heldy hopes to be in the top three runners in the 2017 World Marathon Championships and then compete in the Olympics. He said, “I have no doubts about making it to the Olympics. Growing up poor taught me that hard work and thrift are sometimes the only things that a person can afford.”

I am confident too. One day we will see Heldy reach those goals and everyone who was at Catawba that Sunday will remember the day they saw him run.