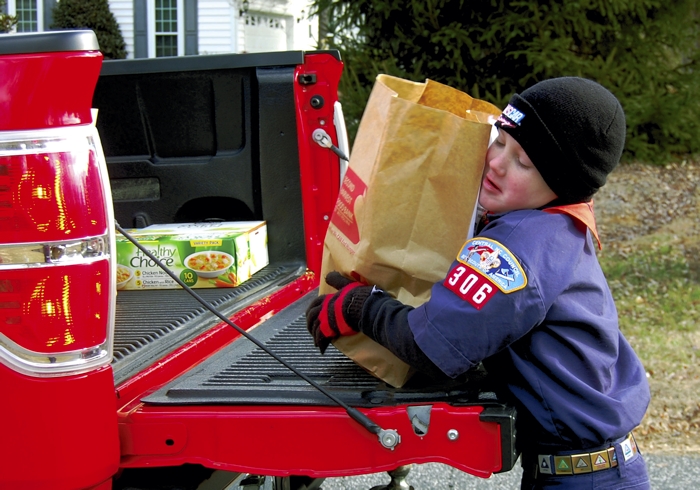 Josh Douthit loads a bag of canned goods onto the back of the truck. Jeanie Groh/Salisbury Post

Rowan County Boy Scouts, along with scouts across the nation, hit the streets this weekend to collect bags of food for Rowan Helping Ministries, through the annual Scouting for Food event.

Last week, the boys went door-to-door, leaving behind large paper bags for the food collection. This week, those who wished to donate left their donations in the bags outside their front doors and the Scouts came by to pick them up.

Organizers say this could be a record setting year for Rowan County Boy Scouts.

They collected a grand total of 20,537 pounds of food – nearly three weeks worth of food for Rowan Helping Ministries.

Food Lion gave an initial donation of 1,000 pounds of food, and then promised to match the Rowan County Scouts’ collection, up to 4,000 pounds – a goal the Scouts far surpassed.

The boys collected 10,214 pounds of nonperishable food items from local neighborhoods. They received two monetary donations equivalent to 980 pounds of food and Colton Opel, a member of Troop 317 who is working on his Eagle Scout project, collected 4,343 pounds on his own.

The China Grove Troop’s donations have not yet been counted, but will go to Main Street Mission.

The boys darted from house to house, looking for bags on front porches. As they walked, parents and troop leaders talked about where the food was going and why it was important.

When they found a bag, they’d load it into the back of the pick up truck they had followed them around.

After they finished canvasing the neighborhood, Troop Leader John McGrail dropped off the 829 pounds of food the boys collected at Rowan Helping Ministries.

At Rowan Helping Ministries, boy scouts sorted the food, put it in boxes and loaded it into a trailer.

According to Nate Valentine, food manager at Rowan Helping Ministries, the food will go into back stock, and will be used to replenish the shelves of the soup kitchen as needed.

“This is outstanding,” said Valentine. “We start getting a little low at this time of year.”

This is the first year Rowan County Boy Scout Troops have donated their Scouting for Food collections to Rowan Helping Ministries.

In an effort to keep the donations local, they did things differently this year.

Not only do donations stay local, having all of the troops drop off their donations at Rowan Helping Ministries simplified things and made them easier, according to John Barden, executive of the Rowan District.

“This is definitely a win-win for both organizations,” Barden said.

The boys also benefitted from their work. It gave Scout leaders the opportunity to teach them teach them the benefits of civic service.

This year, Food Lion plans to donate 75 million meals to families in need through its Food Lion Feeds Program. Saturday’s donations are a part of that program.

“With our Food Lion Feeds, it was a great alignment in what the scouts are trying to do,” Guimond said.

“I couldn’t be more proud of my company,” she said. “I grew up very poor and I know what it’s like to go hungry.”

“It means a lot,” Guimond added.