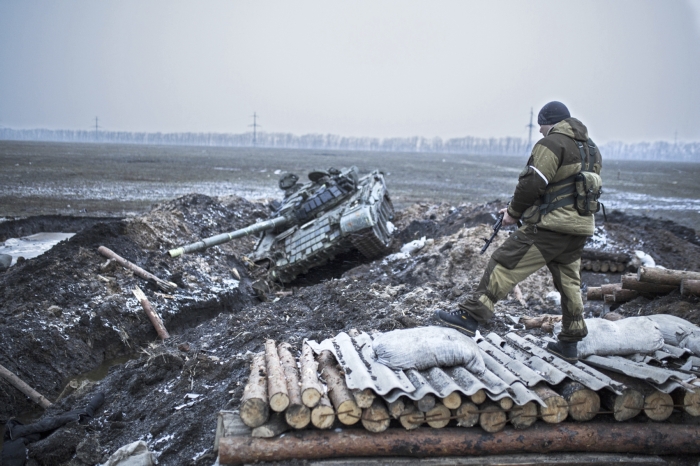 A pro-Russian rebel guards a captured former Ukrainian Army checkpoint outside Vuhlehirsk, Donetsk region, eastern Ukraine, Thursday, Feb. 5, 2015. The rebels have closed in around the town in a strategy they triumphantly refer to as the Debaltseve cauldron. Separatists recently burst through government lines in the rural settlement of Vuhlehirsk. (AP Photo/Vadim Braydov)

Congressional leaders will face resistance in a vote to authorize Obama’s war against Islamic State militants despite outrage over the gruesome killings of captives.

2. WHAT REBELS, UKRAINIAN FORCES HAVE AGREED UPON

Pro-Russia rebels and government forces in the conflict-ravaged east will allow a humanitarian corridor to evacuate civilians from the fighting.

3. WHO IS AN ALLY IN MEASLES QUANDARY

As vaccine skeptics fight laws that would force more parents to inoculate their kids, conservative Republicans are coming to their defense.

4. HOW JAPAN IS ADDRESSING WORKAHOLICS

Many Japanese forgo up to three weeks of paid-vacation they’re entitled to, but the government is making changes to ease the stigma of taking time off.

A service will held in Dobbs Ferry, New York, for Ellen Brody, a 49-year-old mother of three, who was killed along with five rail passengers when a commuter train crashed into her SUV at a crossing.

TransAsia Airways pilots may have shut off the propjet’s remaining engine before attempting to restart it, but the plane crashed before that could happen.

The president’s proposal to make two years of college free would get a key test in a state where education issues are squarely in the spotlight.

A documentary presents an intimate, informative and at times awkward look at the insular religious community’s approach to sexuality.

“Nightly News” anchor Brian Williams is fighting for his credibility after falsely claiming the helicopter he was riding in was struck during the Iraq War.