The resolution: Brent and Norma keep rolling along 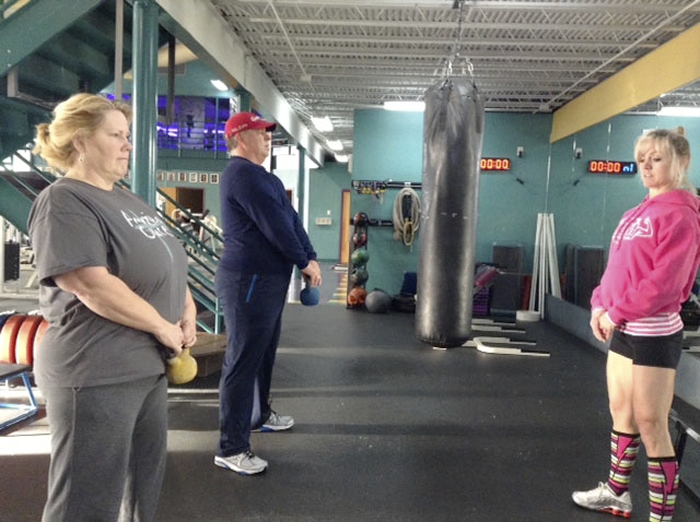 Melissa Shore, right, trainer at the Forum, instructs Brent Parks and Norma Honeycutt on the proper way to use kettle bells. David Freeze/For the Salisbury Post

This is the fifth in a series of columns that will follow Brent Parks and Norma Honeycutt throughout 2015 following their resolution to establish better health. They will do this by controlling their weight and implementing an exercise program for better cardiovascular health. Both Brent and Norma are committed to heading off chronic diseases such as diabetes and heart disease that usually accompany severe excessive weight.

With week four now complete, I find Brent and Norma testing their current limits and wanting to push forward. At least once this past week, they found that progression a real challenge. But with those challenges come opportunities. More on that later.

My goal has been to get them exposed to various methods of exercise and then let them decide a significant portion of the workout schedule to fit their own preferences and available time. That plan is not just good for Brent and Norma but for everyone else as well. All of this is taking shape and the need to exercise is becoming constant, just as it should.

We visited Ralph Baker Jr. at Ralph Baker’s Shoes on Tuesday morning. I knew that both needed new shoes and that very likely they needed some stability. Foot motion, side to side, is expected as we move. But an excessive amount needs to be addressed to make the body more efficient.

Just as we were about to go in the front door, Sheriff Kevin Auten stopped his walk briefly to encourage Brent and Norma. Kevin’s own weight loss was chronicled so well in the Post by Shavonne Walker last week, and the meeting of kindred spirits was wonderful to see. Kevin asked them to call him if needed and to keep drinking lots of water.

With renewed excitement, we met Ralph Jr. in anticipation of getting proper shoes for their weight loss journey. Ralph told Brent and Norma that shoes are made for the masses, but the correct shoe depended on a specific list of elements. With that, he decided that Brent needed foot stability, arch support and a broad base. The goal was to keep his foot from rolling out, even though it may seem unnatural at first. Brent bought a pair of 1540 New Balance running shoes after trying on several pair.

Ralph Jr., a board-certified pedorthist, had seen Norma’s dad often in the store because of his need for diabetic shoes. Ralph Jr. said, “Medicare and Medicaid pay for one pair of proper shoes for the diabetic each year. Norma’s dad made sure to come by and get them.”

Norma needed a stability shoe as well, plus she had concerns that a previously injured Achilles and toes that go to sleep needed to be addressed. Ralph brought out four pairs and had her try them on before she quickly settled on the one that felt best even though not the most feminine in appearance. Ralph Jr. said, “We could put pink shoe strings in it, but she chose our number one best seller, the Brooks Dyad. Brooks has really kept up on technology.”

The store stands behind the shoes, so if for any reason the new ones don’t work out, Brent and Norma were encouraged to bring them back. The store was opened by Ralph Baker Sr. in 1976. It caters to all walks of life, but especially those with a need for custom shoes. Ralph Jr. is a lifetime runner and a type 1 diabetic. He works by appointment in the store for those who may need special attention to their shoes or custom orthotics.

While Ralph Jr. was working with Norma, Brent bought several pairs of casual and dress shoes. Norma said, “He needed to. The ones that he had on were worn out and leaning to one side.”

Next was a visit to the Forum on Thursday. After a brief delay to wait for Norma, which Brent has now labeled “Norma time,” we met with trainer Melissa Shore. Melissa asked questions, then described her plan for a more intense circuit workout. She started with a warmup that included lunges and PVC pipe stretches that focused on balance. Norma said, “I don’t have the balance that I need because I haven’t been doing anything.” Brent needed work on his core and to strengthen his back.

Melissa set up a circuit that included use of a rower, pushups, planks, crunches and kettle bells and specific times and quantity for each portion. She said, “The core is where we want to get strong. That is where we are going to work today.”

And work they did! Kettle bells are weights with a round handle that are easy to hold and swing. Planks are done by supporting the body on your elbows and toes for as a long as possible. Both develop core strength. After a quick start, Norma quipped, “How long do we have to do this?” When told that she needed to do 50 reps raising a kettle bell while Brent held his plank, Brent said, “Come on, Norma, help a bro out!”

After a challenging workout, Melissa asked them, “Do you still love me?” Brent said, “Yes, but you pushed us to our limits.” I think Norma agreed.

Signs that we continue to gain momentum include the fact that both are keeping up their scheduled workouts and looking for ways to add to their calorie deficit where possible. Norma encouraged a group of seven co-workers and board members at Partners in Learning to join her for another round of Zumba with Tracey McKenzie at the Civic Center on Wednesday. Both are paying special attention to their caloric intake, and Brent probably had the best line of the week when he said, “I was at O’Charley’s during ‘Free Pie Wednesday.’ Before, I would have had mine and asked the next person if they didn’t want theirs. I had no pie this time.”

Next week, we will go to Fowler Physical Therapy and start to emphasize some weight-bearing cardio that will truly get the body moving. Yoga is on the horizon.

We have targeted areas that we need and want to work on. Brent said, “I want to stabilize my joints in my lower body. My knees, ankles, heels need work to get ready for more challenging workouts like running, jumping and circuit training. I really like the circuit training.”

Norma said, “I have identified my core and the need to strengthen it because it is contributing to my poor balance. I like Zumba much more after the second time and enjoyed Body Pump at the Y today. I know I will be sore, but it is a good sore. With all these lunges, my legs will probably get so small that they won’t hold my body up.”

As you can see, they are a lot of fun. Like Kenan Smith told Brent today at the Y, “Brent, you are making progress, and it is good to see you in here nearly every day. This is working.”

Brent’s wide smile truly was worth a thousand words. See you next Monday.