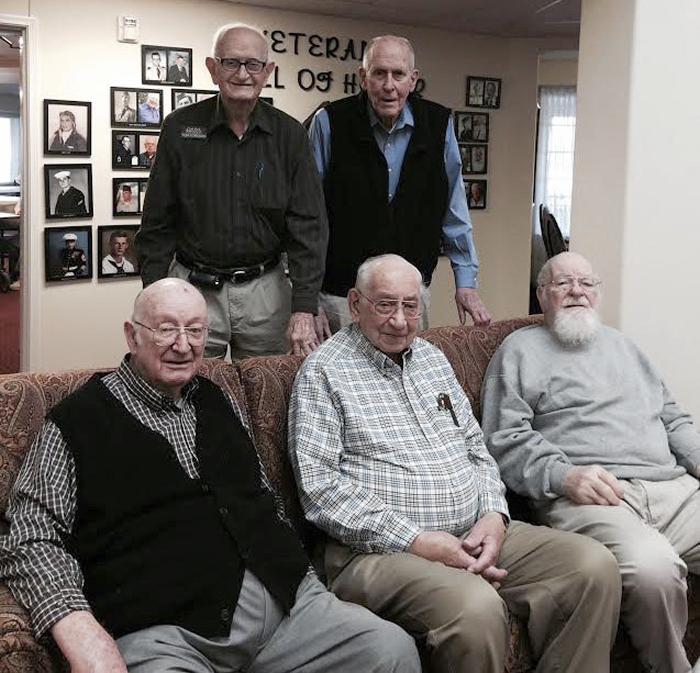 Among the World War II veterans who live at Oak Park are: front row, from left, Bob Freeman, David McTernan and Marvin Johnson, and back row, from left, Thomas Foreman and Hall Steele. Submitted photo

Last week, in part one of this series, I reported on the tremendous opportunity to spend Monday morning, Jan. 19, in the presence of a group of true American heroes who served their country during World War ll. We were at Oak Park Retirement, where the veterans were being videoed by Mike Bebber from Price of Freedom Museum on Weaver Road. The program is called “Traveling through the Decades Fitness Challenge,” offering a chance for enjoyable recollection of the residents’ experiences throughout their lives.

Originally from Newark, New Jersey, David McTernan had already served in the CCC in Idaho and Oregon. He was drafted in October, 1942, and received his training at Fort Dix and Fort Eustis on the way to North Africa. Trained in telephone and communications, he served in an anti-aircraft unit watching over the North African shoreline. McTernan later served in the Mediterranean, then at the Battle of the Bulge in southern France and in the Hurtgen Forest, the longest single battle the U.S. Army has ever fought. McTernan said, “A shell hit me in the arm and leg, and I knew then that the war was over for me. I was sent to a real hospital in Nancy, France and ended up with a two-month recovery. With enough points to go home, he was sent to Omaha Beach for the trip back to the U.S. “I got to see London and Paris. That was great for me. We rode the Queen Elizabeth home with 18,000 soldiers. When we passed the Statue of Liberty, I thought we were going to turn over. All 18,000 were on one side of the ship,” said McTernan.

After the war, McTernan finished his schooling, then worked for the railway post office, the U.S. Post Office, and finally for a publisher for 25 years before coming to Oak Park.

Hall Steele was born on Fulton Street in Salisbury. He was a 1945 high school graduate, enlisting immediately, which classified him as a World War ll veteran. Steele served in the Military Police at the Manhattan Project in Oak Ridge, Tennessee, and at the Sandia Base in Albuquerque, New Mexico. Sandia was the primary United States nuclear weapons installation.

After his discharge, Steele attended college at Mars Hill and Clemson before returning to Rowan County to take over the family store in Bear Poplar. He served 12 years on the county board of commissioners. Steele said, “I felt like I was representing the farmers of the county. Some of our successes were the 911 system and economic development.”

Another veteran too young to have gone overseas by the end of the war is Bob Freeman. He was born in Memphis before moving to West Virginia and then finally to Horseshoe, North Carolina. Freeman was a sophomore at Davidson College in 1943 when he made the decision to “volunteer to be drafted.” The Army and Navy had formulated a plan for those in college to begin their military training.

Freeman left Davidson and went to Carson Newman to begin training for the Navy. Freeman said, “I had the choice to ride to battle or walk there, so I chose the Navy. It was fun at Carson Newman because they had girls. We didn’t have them at Davidson.”

Next up was pre-flight training at Chapel Hill. Freeman never got to fly because the Pacific peace treaty was signed on the same day he completed his 18 months of training. Freeman said, “I like to tell people that the enemy was afraid of me!”

Discharged in 1946, Freeman went back home and then returned to Davidson to complete his studies before going to seminary. He pastored churches in Fayetteville and Charlotte before coming to Salisbury and Second Presbyterian. Freeman now enjoys playing bridge with an eight-man group that includes Hall Steele.

Thomas Foreman Jr. grew up in Concord and then Salisbury. He trained as an infantryman in the Army, then went to mechanics school in the Army Air Corps. Foreman became a top turret gunner/ flight engineer on B-17s. His crew flew a new bomber from Lincoln, Nebraska, to England. He said, “If the rhythm of the big radial engines changed, I would wake up and address the issue.”

Foreman completed nine missions, while serving from 1943-1946. “I am just glad to be alive. The flak was terrible over the targets. The B-17s were vulnerable from the rear because we had less firepower there,” he added. Foreman worked for 11 different companies after the war.

Also originally from Concord was Marvin Johnson. After his brothers had joined the service, Johnson enlisted in the Navy in 1944 and was sent to radio school but didn’t like it. He then was assigned to LST 500, or Landing Ship, Tank. LSTs supported amphibious landings by bringing supplies and equipment ashore. Johnson’s LST sailed from Texas to New York City, Boston, Nova Scotia and on across the Atlantic, eventually to land in Plymouth, England. Johnson said, “It was the first time that I ever heard a buzz bomb. They were scary. Once you heard the engine quit, the bomb was headed for something nearby.”

Johnson’s LST was in the first wave to go ashore at Omaha Beach on D-Day. He remembered, “Eighty-eights were flying by my head. We made 52 trips back and forth over the next few days to deliver supplies. One day, I saw General Eisenhower walk by on the beach.” LST 501 and LST 479 both chose anchorages that Johnson’s LST 500 could have taken and were blown up by mines.

Discharged at Falmouth, Massachusetts, Johnson came home and married his wife, Juanita, who was waiting in Charleston, South Carolina. He and Juanita have now been together for 68 years, raising three daughters, and now have 26 grandchildren. Johnson has recently taken up painting with acrylics.

In the months to come, Oak Park residents will enjoy Elvis entertainment, a Rubik’s Cube contest, a disco night, a Coke versus Pepsi night, and much more as they celebrate the decades till 1980. They will get a chance to fly in a helicopter in February. They are going to have a lot of fun, just as I did while visiting with the veterans, truly part of America’s “Greatest Generation.” I wouldn’t have wanted to miss any of it.