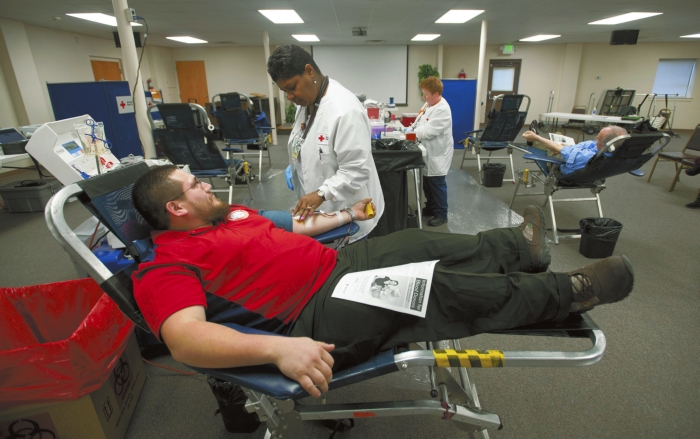 JON C. LAKEY / SALISBURY POST Natalie Moore, a Collection Specialist from Winston-Salem, checks on Elias Garza during his donation. Garza, a member at Stallings Memorial Baptist Church, donated a Double Red Cell during the blood drive held at the church on Tuesday.The winter months is traditionally the slowest period of the year for blood donations. Holidays, travel schedules, inclement weather and illness. January, in particular, is a difficult month for blood centers to collect blood donations. January has been designated as National Blood Donor Month to encourage donors to give blood. on 1/6/15 at in Salisbury, NC, .

Temperatures aren’t the only things that drop in winter.

American Red Cross representatives say the overall amount of blood donated is noticeably lower during winter months, such as January. This month is also National Blood Donor Month, with at least nine drives planned in Salisbury alone and 10 total in Rowan County.

One of the first blood drives of the year was Tuesday at Stallings Memorial Baptist Church on Main Street. Some were giving for the first time, while others were longtime donors.

William Faulkner Jr., a Salisbury resident, said he was giving for the first time Tuesday because of a medical procedure in which his father-in-law needed 22 pints of blood.

“I figured it was kind of greedy not to donate,” Faulkner said. “I think I’ll continue. It was uneventful, and the people here were fantastic. The removal of the tape was more painful than the needle.”

For others, such as Rowan County resident Elias Garza, Tuesday was just the latest in a long string of donations. Garza said he first gave blood while in the U.S. Marine Corps.

“It wasn’t mandatory, they didn’t demand that we give blood or anything, but it did get us out of a day of work,” Garza joked.  “Since then, I’ve just donated on and off, whenever I can. Giving blood hasn’t really bothered me, but I guess everyone is different.”

Personal encounters with tragedy motivate some people to start donating. As for those who don’t donate, American Red Cross spokeswoman Natividad Lewis said some choose not to donate simply because they haven’t been asked.

“The reality is that you never know when it will hit home for you,” Lewis said. “Thousands of blood donations are needed for accidents, cancer patients and children with blood disorders. Donors make it possible to keep the hospital shelves stocked and ready to go.”

National Blood Donor Month officially started in 1970, with a goal of increasing blood and platelet donations during winter.

Ricky Delk, who works for the Red Cross, said illnesses such as the flu trditionally reduce the number of people who are able to donate and, therefore, the total amount of blood collected decreases. Winter weather may also discourage potential donors from traveling to a donation site, Delk said.

As a part of National Blood Donor Month, the American Red Cross of Rowan County will also be part of a larger blood donation effort on Friday. Six sites in five counties, including Rowan, will have blood donation drives on Friday as a part of the annual Masonic Community Blood Drive. Salisbury’s site for the Masonic drive is from 2 p.m. to 7 p.m. at the Salisbury Masonic Lodge on North Fulton Street.

“It’s been around for 26 years, so it’s grown year after year,” Lewis said.

For the Masonic Community Blood Drive, Lewis said the Red Cross hopes to collect 400 pints. With one pint of blood potentially saving three lives, the Masonic drive alone could help save up to 1,200 lives, she said.

The maximum amount Delk said donors could give per year is 6 pints.

Sites in Rowan County that will have Red Cross Blood Drives soon include: