Resolution Run 5K: This time, they ran for more than trophies 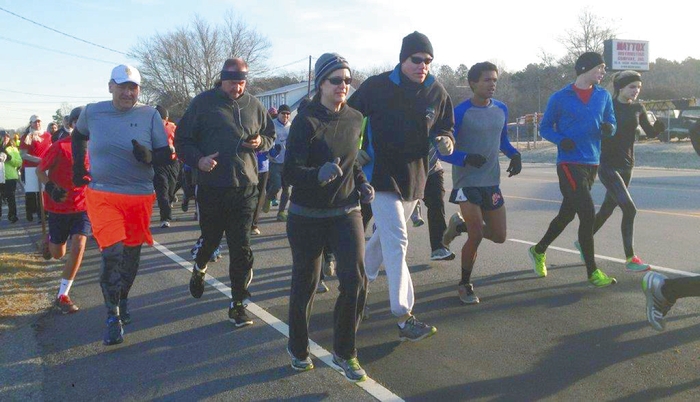 Resolutions. We all make them or at least think we should. What we do with resolutions is as varied as different personalities and sizes of people.

New Year’s Day in Salisbury dawned with temperatures in the low 20s but with a bright forecast. With just a little bit of time, the conditions would be a lot better.  After watching and listening to those who came out to run the Resolution Run 5K, I think many of the runners and walkers were making the same statement. It was as if they said, “If I invest my time in my fitness resolution, my own outlook will be better.”

On most weekends throughout the year, our running club works at races where most of the participants are greatly concerned with competing for overall or age group trophies. Or at the very least, they want to run a certain time for the event that is based on experience or their training level. A lot of these folks leave disappointed that they didn’t win an award or finish higher than they did. I certainly know how they feel, having been an extremely competitive runner for almost 25 years.

Along the way, I learned that there is much more to the big picture than how many trophies or awards you take home in your lifetime. The Resolution 5K had no trophies or awards, and a very minimal entry fee. It is unheard of to participate in a 5K for five canned goods or $5, especially with the day of big city races that often charge $40 or $45 for a 5K and much more for longer races or specialty events like color or adventure runs. Usually very little of the proceeds in these races go to a local charity. Some are run entirely for profit.

Just three weeks ago, the Salisbury Rowan Runners and their partners decided to have a different kind of run in Salisbury. Those partners included the Forum, Novant Health and the City of Salisbury. The goal was to encourage runners and walkers to participate, especially those who needed to make their own commitment to improving their health for 2015.

We had 200 finishers and about that many stories as to why they got up to run on a cold morning. One of my own favorite memories of the Resolution 5K will be some of the stories that I heard. Robert Miller, one of the area’s best runners, told me that he had befriended a runner who had set a goal of improving his 5K time. Miller, who has much faster times over the same course, decided to run with his new friend and encourage him. It was that kind of morning, and Miller’s help made the difference as the friend achieved his goal.

Others didn’t worry about times as much as the achievement. Over and over, we heard, “I did it!” I have never seen so many folks get a photo of themselves in front of the finish banner — lots of true celebrations that will carry over and hopefully provide energy for the next step in their resolution commitment.

Mallory Hodge, Salisbury High School volleyball coach, has been a regular runner for years. During most of that time, she encouraged her mom, Kathi, to get a better handle on her fitness. Mallory read about the upcoming Resolution 5K and asked her mom if she would be interested in participating. They both decided to do it, securing the commitment when they bought matching outfits. The Hodges planned to start off walking and run if Kathi felt like it.

Mallory said, “I am so proud of my mom for wanting to change her life. Walking leading to running is getting her in shape, and she has more energy. She feels better about herself.  We wanted to start out the New Year in a healthy way. This will be one of many race experiences for her.”

After breakfast, Kathi asked her daughter, “When is the next one?”

Rowan Helping Ministries was the recipient of the canned goods and donations from the runners and walkers. Kyna Grubb, executive director of RHM, said the turnout and the proceeds were amazing.

“The Resolution 5K raised over $500 and enough food to fill the floor of the RHM trailer,” Grubb said. “During every week, we provide groceries for 300 families, and Jeanie’s Kitchen provides 2,100 meals. When we can help in this way, families don’t have to choose between their homes or eating. No one should have to go hungry.”

“It felt good this morning to be helping others while resolving to be healthier this year,” she said.

Grubb ran the 5K with her husband, John, and has committed to run the Winter Flight 8K, the next local race that will benefit RHM. That race is set for Sunday, Feb. 8 at Catawba College.

The Forum was the host for the Resolution 5K, providing registration and shirt pickup, food drop-off, parking and post-run refreshments. Manager Rayna Gardner, director of the very successful Butterball 5K on Thanksgiving Day, was happy with the turnout.

“Awesome, awesome, awesome is all I can say!” Gardner said. “What a great way to start the year and with such a great crowd! Thanks to everyone who came out to support Rowan Helping Ministries. It is wonderful to know that getting people up and moving not only helps them but also a charity that is so important to our community. Sign us up for next year!”

The city of Salisbury provided police coverage for the event as well as participation from Parks and Recreation, Street Maintenance and the Fire Department. Volunteers from Salisbury Rowan Runners and Rowan Helping Ministries manned the course as well.

Usually near the end of race reports, I tell everyone to check for results at www.salisburyrowanrunners.org  This time the results are there, but they are based on the person’s finish place, so you won’t see their names. They know who they are and what they will individually take from their participation. You won’t read about awards, but this event didn’t need them. We’ll do it again for sure.

There is still time to get signed up for the Beginning Runners Class at First Methodist Church on Monday, Jan. 5. Start time is 5:45 p.m. Additional information is available at www.salisburyrowanrunners.org or by calling 704-310-6741 or 704-202-6601.