Girl on the run: Jaylea Hughes finds confidence, inspires others 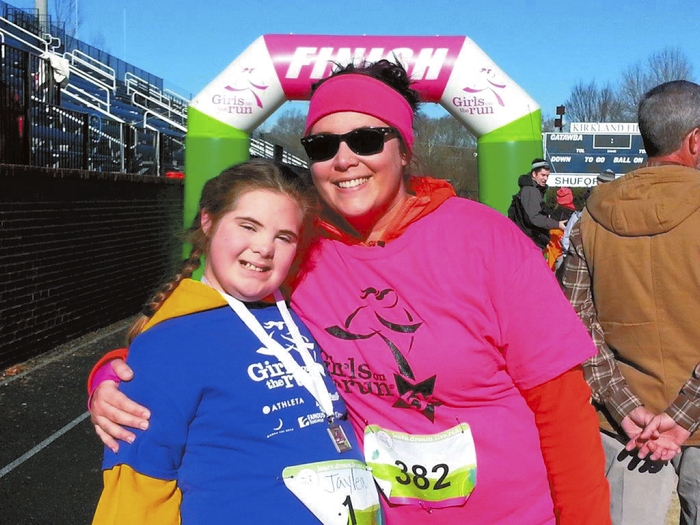 Jaylea Hughes (L) and big sister Jordan who ran with her in the Girls on the Run 5K. Submitted photo.

While the Girls on the Run program has become commonplace at area elementary schools and a few middle schools, one girl with a huge heart and lots of courage and perseverance was the center of attention when she crossed the finish line on Dec. 13. The event was a 5K run at Catawba College for nearly 500 girls who were completing the Girls on the Run fall program.

Girls on the Run is an international organization that uses running to inspire and motivate girls, encourage lifelong health and fitness, and build confidence through achievement.

“Our vision is a world where every girl knows and activates her limitless potential and is free to boldly pursue her dreams,” said Amy Spear, events coordinator for Girls on the Run in Iredell and Rowan Counties.

Erwin Middle School Girls on the Run coaches Audra Perry and Jennifer Griggs started their program four years ago. They wanted to empower the girls through their love of running and help them to become more confident young women. In their first group was a young girl who could not speak English, which provided a few extra challenges.

“We learned a lot, and knew we had a purpose,” Perry said.

When it came time for the fall 2014 sign-up, the Erwin program only had space for 15 girls, but a special waiver allowed Jaylea Hughes to make 16. Because Jaylea has Down syndrome, she could only participate if her special needs teacher assistant would accompany her.

That teacher assistant, Susan Smith, had suggested the program to Jaylea’s mom.

“I thought that it would be good for her to have the experience outside of school with girls who do not have the problems that she faces,” Smith said.

What followed was an amazing transformation, both for Jaylea and all the other girls on the team. Griggs said that while year one of the Girls on the Run program was very rewarding, this fourth year produced something special.

“Jaylea needed the social interaction. She loved to touch the faces of the other girls and hold their hands while she ran. But what happened naturally was even better,” Griggs said. “Different students at different times stepped up to encourage Jaylea. She served as a link to pull them all together. The other girls grew to adore Jaylea and she them.”

“And Jaylea would encourage them back,” Perry added. “She would tell the other girls to come on and run. Our group became much more cohesive than we ever could have expected.”

Girls on the Run always ends with a chance for the girls to prove that they can run a 5K (3.1 miles), thus the event at Catawba College.

“Jaylea had only run two miles before,” Perry said. “Her sister, Jordan, was Jaylea’s chosen running buddy that morning but all the girls were pulling for her. We all wanted to see her cover the distance. Many of the girls were assertive when asking their parents if they could stay and support Jaylea over the last part of the run.”

After about an hour and 10 minutes, Perry and Griggs became worried and took the other girls back out on the course to find Jaylea. They found her with about a half mile to go.

“Jaylea’s entire being lit up when she spotted the other girls,” Perry said. “She ran very fast toward them. They began to hold hands as Jaylea ran and walked toward the finish amid constant encouragement.”

The other girls cheered Jaylea on with phrases like: “You’ve got this,” “We believe in you,” “We love you,” and, “You’re going to get a medal.”

“Jaylea entered the track within sight of the finish and the announcer started calling her name,” Perry said. “We were all cheering and crying as Jaylea crossed the finish line with a huge smile.”

Griggs asked Jaylea if she wanted a piece of fruit or a bagel. She responded, “No, I am getting a cheeseburger and fries.”

Jaylea’s teammates had plenty to say about her.

“She was a role model to me and she always put a smile on my face,” Chelsea Skeens said. “I love her like a sister.”

“As soon as we got back and saw her face, Jaylea lit up. It was a special moment for all of us. In that moment, we were not just a running group, we were friends that loved each other,” said Carleigh Perry.

“Having Jaylea on the team was so encouraging. Most of all, Jaylea created a special relationship for all of us on the team,” said Emily Cipolla.

Maddy Moffre added, “When we got to the finish line, everybody was chanting her name. It was joy I saw!”

Jaylea’s mom, Lanette, and dad, Randy, were on hand for the finish as well.

“I had no idea she could do this,” Randy said. “We were just tickled. It was very emotional.”

“I was so glad that they made room for her on the team. Jaylea needed the extra activity,” Lanette said. “I was really touched that the other girls did what they did for her. Girls on the Run is great for mentoring, self-esteem and just helping the girls to grow up.”

When asked her own thoughts about completing the 5K run, Jaylea said, “I love my medal. I am keeping it in a secret box in my room. My favorite part was when the announcer called my name over the loud speaker. I made new friends. I love all my friends, the Girls on the Run team.”

The team recently hosted a Christmas party for Jaylea’s special needs class, complete with crafts and lots of merriment.

“Children are much more kind than we give them credit for,” said Smith, Jaylea’s special needs teacher assistant. “Eventually they didn’t notice the disability as much as they notice the person.”