Skydiving Santa: A magical morning for all ages 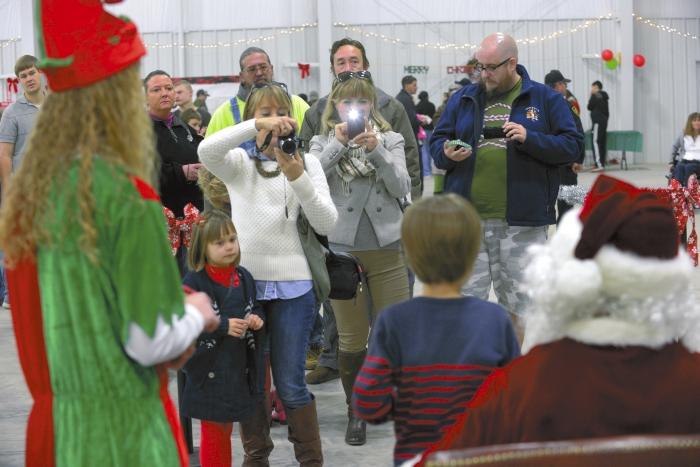 Rowan County Airport Manager Thad Howell had several goals in mind when he contacted Santa Claus about making his first stop at the airport back in 2012. Celebrities and famous airplanes occasionally visit the airport, but Howell wasn’t confident that he could interest the jolly round man in an appearance at such a busy time of year. Claus’s people worked out a small window of availability on that December Saturday and a tradition was born that continued this past Saturday while bringing long lasting smiles to all involved.

Howell wanted to address other goals as well when he first contacted Claus. Howell said, “I wanted people to come see our airport. We have a wonderful facility here. Our other goal is to use this event to help gather food for Rowan Helping Ministries. The Santa Drop is free and all we have asked is that those who attend consider bringing non-perishable food to fill an RHM trailer parked on site.”

The parking lot near the airport’s largest hanger was close to full as anticipation of seeing Santa skydive into the airport brought out hundreds on a bright Saturday morning. The Santa Drop was certainly a family event, though not limited to large groups. Steve and Melinda Weatherford brought their eight year old grandson and airplane enthusiast, Dash Dixon. Dash, calling his grandparents Pop-Pop and MiMi, said “They didn’t tell me where we were going, but I am excited to be here. I want one of the newest Lego games and Pop-Pop wants a sailboat. I just wanted him to realize that it would take one of those large Russian cargo planes to deliver a sailboat.”

Standing nearby were the Nance and Mills’ families. Mandy Nance brought her kids, seven year old Cameron and five year old Claire. Grandparents Gary and Peggy Mills came along too. Mandy said, “This is so neat for the kids to see. It is pure magic! They got up this morning excited and ready to go.”

Air traffic was fairly busy on Saturday, and at least a few of the spectators worried about whether Santa would be safe when he jumped. Howell assured everyone that all the other planes were aware that Santa was in the area. Howell yelled, “One minute!” and all eyes looked skyward at a small plane moving slowly overhead. A small red dot appeared as Santa began a short free fall just before his big red parachute opened. Kids and more than a few adults cheered as Santa neared his landing area. With practiced skill, Santa landed on his feet and ran to a stop before waving to the crowd. In just a few seconds, Santa was unhooked from his harness and waving again as he jogged toward a waiting pickup truck. Soon Santa was delivered to the hanger where a long line to visit with him was already forming.

Airport staff had arranged the backdrop of a small plane and Christmas lights serving as runway markers. Food, crafts and games were already going strong inside as Santa made his way to the head of the line escorted by one of his elves.

Familiar with the airport, Brandi Lipe brought her daughters, three year old Sloane and five year old Stella. Lipe, whose grandpa was a pilot, often brings her daughters to see the planes take off and land. Sloane said, “When I saw Santa land, I just wanted to run over and give him a hug!”

Claus, looking very relaxed after the jump, explained why he takes time to stop by Rowan Airport. He said, “So far, it is still not common knowledge that I use skydiving to quickly reach the houses as we fly around the world on Christmas Eve. Just imagine, I’ve been doing this for such a long time and it doesn’t get easier. There are so many good little girls and boys that I must visit an amazing number of homes. I can jump right out of the sleigh and be on the roof in seconds while the reindeer glide slowly down for their FAA safe landing. Once I drop off the gifts, I am quickly back in the sleigh still nibbling a cookie or two as we head to the next house.”

“Speaking of cookies, I was grateful that Food Lion donated so many cookies for today. It is unfortunate that the airport staff had to lock them all away from Dusty Mills. It is amazing how many cookies that guy can eat. He is bordering on being on the naughty list.” Mills, Airport Line Supervisor, responded with, “I can’t help it, I’m a cookie junkie.” Cheerwine donated the drinks and the EAA donated the food.

The Butchert family saw a sign at WilcoHess and made plans to stop in on Saturday. Ben and Sarah brought seven year old Sebastian and two year old Maddox. Sebastian asked Santa for Super Smash Brothers, Hyrule Warriors, and a Link costume. Ben Butcher said, “We’ve been excited as parents to bring our kids here. This is wonderful way to get the Christmas spirit.”

When kids sat on Santa’s lap, they were often asked to tell whether they had been good all year. Nelee Mickey, age seven, quickly responded that she had been good. Her family members listened in, especially mother, Holly Euart, and grandmother, Dottie Curtis. Nelee told Santa that she wanted an IPod Touch. She said, “I enjoyed seeing Santa skydive. I didn’t know he did that.” Curtis asked Nelee if she really had been good all year, to which Nelee replied, “Well, maybe this one little teeny bit of being bad.” Curtis pointed out that the family’s Elf on a Shelf had been touched and had lost its magic for three days. Nelee remains confident that she is still on Santa’s list of good children, now that the Elf has in fact regained its magic.

Howell thanked Locke Fire Department for being on hand, the Piedmont Skydiving staff, and especially Charles Hammond, Tim and Casey Surratt. Howell said, “This year’s Santa Drop was our best yet. The staff and volunteers have worked hard for the last few weeks to make it successful. The best part of all this is helping Rowan Helping Ministries while making lasting memories for kids and adults alike. We are already looking forward to next year.”

It was hard not to smile throughout the morning. Magic was in the air for everyone. Joe Trainor, standing with his family and friends, said, “The Santa Drop is fantastic! I’m impressed with everything here. It is for such a good cause with the fortunate helping to provide for those who are less so. We absolutely are glad we came.”