Sleepy Santa, wistful dolls: Hall House Christmas has it all 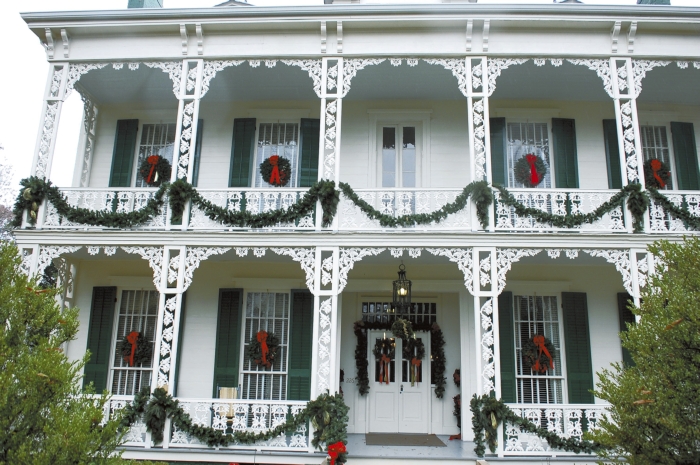 Mark Wineka/Salisbury Post The Hall House on South Jackson Street is open for Victorian Christmas tours Saturdays and Sundays through Dec. 21, from 1-4 p.m. A candlelight tour also will be offered Christmas Eve from 6-8 p.m.

SALISBURY — Within 30 minutes Saturday afternoon, visitors from as far away as South Carolina, Virginia and Maryland were taking their Victorian Christmas Tour through the Hall House on South Jackson Street.

“I think it’s beautiful,” Peg Barton of Baltimore said as she toured the 1820 house with her Salisbury friend, Leisa Steele. “I think it’s so unusual, and I like the theme idea.”

For the individuals, businesses and groups assigned to decorate each room of the Hall House, this year’s theme was “The Nutcracker,” and nutcracker soldiers of all shapes and sizes are sprinkled generously throughout the rooms and hallways.

“It’s like you’re following the ‘Nutcracker’ story,” docent Ashley Bain said, describing the progression through each of the rooms.

There are dolls galore. They seem to be floating and dancing on top of the Hall House’s monstrous piano in the parlor, where appropriately the sheet music is turned to “Dance of the Sugar Plum Fairy.”

If you go, look for the sleeping Santa snuggled under the covers of an upstairs bed, and take in the beauty of several splendid Christmas trees decorated as though it were 100 years ago.

The 12-foot-tall Christmas tree in the front living room may be one of the prettier ones you’ll see this year, and everything seems to be decorated for the holiday — down to the bedroom chamber pots.

Steele, a docent in training herself, happened to be at the Hall House for a reception last Thursday night, and “the whole home just glowed,” she said.

She liked, for example, how Leslie Black had used plenty of white and gold decorations to bring warmth to one of the upstairs bedrooms, which is otherwise pretty dark.

“That night this room looked even more beautiful,” Steele said.

Regular tours through the house during the Christmas season will be held 1-4 p.m. Saturdays and Sundays through Dec. 21. A special candlelight tour then is planned for 6-8 p.m. Christmas Eve.

Admission for the weekend tours is $5 per person, or free for members of Historic Salisbury Foundation, which owns the house museum. The candlelight tour is by donation.

Christmas tours have been held every year since the foundation purchased the Hall House in 1972, and foundation officials say some families make the annual tour part of their family traditions.

Besides getting to enjoy the decorations, visitors hear the docents weave the history and people of the house into their tours, as they always do.

Ron Moeckel of Westminster, S.C., deserved some kind of prize Saturday because he came to the docents’ rescue in figuring out how to turn on the lights of the 12-foot Christmas tree, which was one of his favorite decorations, too.

Moeckel, known as the Clark Griswold of Westminster because of his flair for outside decorations, investigated connections under the big tree and realized whoever had unplugged it previously had flipped the end of the electric cord into the limbs of the tree.

Moeckel retrieved the cord, plugged it in and was heralded as the king of Christmas, if just for a moment.

Moeckel and his wife, Val, were visiting Russ and Kathy Stevens in Salisbury, as were their mutual friends, Doug and Patti Carne of Clarksville, Va. It’s a little bit complicated, but the three couples visited the Hall House Saturday as part of their own “progressive decorations tour.”

This year’s tour started in Salisbury, because Russ Stevens had to sing in a local concert Friday night. Saturday night, the couples were traveling to the Carnes’ home in Clarksville to take in Patti’s extensive interior holiday decorations.  Today, it’s on to Westminster to see what Ron “Griswold” Moeckel has cooked up with his exterior decorations, which apparently are pretty impressive.

“If it hadn’t been for the concert last night, we would have done it more logically,” Russ Stevens said.

Patti Carne started decorating for Christmas the day after Halloween. Each of the trees she decorates — and Doug Carne said there are at least 11 Christmas trees inside their house — has a theme.

“I have a whole tree of nutcrackers at home,” he added.

And that’s what Carne liked most about the holiday decorations at the Hall House — the nutcrackers.

They made him feel right at home.

FACT check: Church partners reach out to families of…