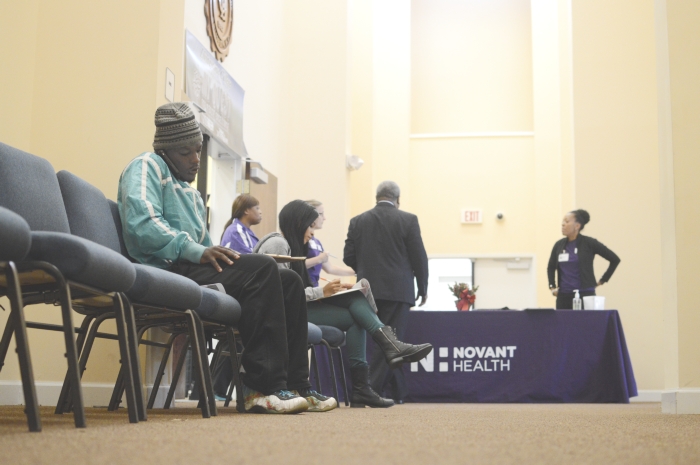 Josh Bergeron / Salisbury Post - Two students wait to receive health assesments on Monday after filling out paperwork at Livingstone College. The college announced a partnership with Novant Health to provide the screenings over four years as part of a new program.

A $260,000 program announced Friday could help transform Livingstone into the healthiest college in the nation, according to the school’s President Dr. Jimmy Jenkins.

Jenkins along with Novant Health Rowan Medical Center President Dari Caldwell held a news conference Friday to announce a campus-wide health maintenance program called MyQuest for Health Excellence. As a part of the program, students receive a baseline health screening with subsequent checkups over a four-year period. The program is offered to all students, with a focus on the 2014 freshman class.

“It’s a project that is unique because of what it aims to do,” Jenkins said. “It aims to take a holistic approach to education, not just about reading and writing. It’s also about health and wellness and, of course, when you are healthy, you are well and able to perform better.”

The program is funded through a $261,891 grant from the Duke Endowment. The grant was awarded in June to specifically support a wellness program for Livingstone College students. Caldwell said the grant funding would be used to pay for health coaches at Livingstone and various supplies needed for screenings. She said the program, which will focus on obesity, also includes other in-kind contributions from both Novant and Livingstone.

Students are placed in three different groups based on the initial screening. The frequency of checkups and screenings depends on the specific groups students are placed in. Caldwell said an individualized program would be developed for all students, but particularly the ones declared “high risk” or not healthy.

Caldwell likened the difficulty of maintaining a healthy weight to the program’s name, saying that it’s easier to stay healthy if skills are learned at an early age.

“The idea is that you’ll be screened as freshman and then through your four year process you’ll have a lot of support, making sure that you have all the information you need about caring for yourself,” Caldwell told students in attendance. “Then, when you graduate, not only will you have those skills, but hopefully you’ll be in top shape physically and be able to carry that forward into life.”

She said explanations of how to pick healthy food at the cafeteria and setting attainable goals would be examples of the coaching and checkups that would occur after the students’ initial screenings.

Jenkins said the program fits well into the college’s overall curriculum because health problems, such as obesity and hypertension are prevalent problems on Livingstone’s campus, but also because the college has developed a holistic learning environment.

“When you come to college, education is the key, as I tell students, to upward mobility in the world,” Jenkins said. “If we don’t teach students that this lifestyle is detrimental to not only your health, but also to performing at the highest level then we’re not doing our job. At the end of the day, we want Livingstone College to be the healthiest in the state and in the nation.”

Aside from health, Jenkins said other benefits could include retaining more students, which would in turn lead to more revenue generated for the college.