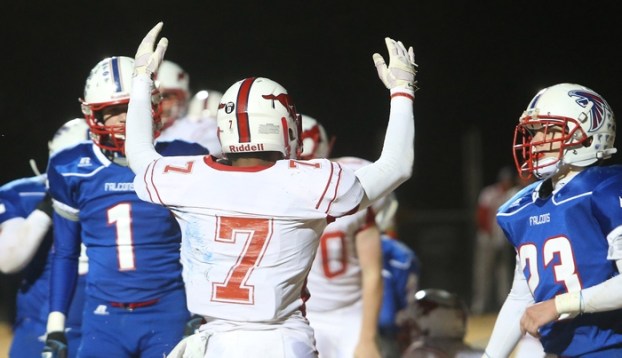 MIKE DIRKS/THE HENDERSONVILLE TIMES-NEWS East Rowan's Max Wall (7) celebrates after scoring a touchdown against West Henderson Friday night in the second round of the 3A state playoffs.

MOUNTAIN HOME — With the opportunity to advance to the third round of the 3A state playoffs for the first time since 1984, No. 7 West Henderson were on the march deep in East Rowan territory with an opportunity to take their first lead of the night.

Unfortunately for the Falcons, that furious second-half rally fell 13 yards short, as William Crouch’s fourth-down pass was batted down in the backfield, giving the No. 15 East Rowan Mustangs a 27-21 road victory on Friday night.

“I am very proud of the way our team played versus a very good West Henderson,” East Rowan head coach Kenneth McClamrock said in a text message to the Post.

“The kids played with a lot of heart and a sense of urgency in the first half. I’m happy for our players, our school, and this community. Proud of our coaching staff. Humbled by this great group of young men. I am blessed to be a part of this.”

The victory leaves the Mustangs (7-6) as the last team in any playoff classification from Rowan County and the South Piedmont Conference’s lone surivior of the second round.

The Mustangs travel next Friday to No. 6 Belmont South Point. The Raiders upset No. 3 Concord, the SPC champion, 37-21.

“We are honored to be the last team from the conference and county left and will do our best to carry that banner forward,” McClamrock said. “Looking forward to practicing Thanksgiving day.”

Flashing the potent offense that put up 50 points on No. 2  Morganton Freedom, the Mustangs (7-6) raced out to a quick 12-0 lead with Samuel Wyrick connecting with his twin brother Seth Wyrick on a 38-yard scoring pass and Max Wall slashing in from seven yards out on the next possession.

Utilizing the powerful running game that has carried the Falcons (9-5) all season, Cody Jackson (16 carries for 158 yards) broke loose for a 51-yard run to cut the lead to 12-7.

Capping off a 70-yard drive, Samuel Wyrick hit paydirt on a QB keeper from the West Henderson 1, and Wall scored his second TD of the game midway through the second quarter to extend the Mustang lead to 27-7.

The Mustangs’ defense held on in the second half.

“Defensively, we bent but never broke,” McClamrock said. “We held a great offense to seven points and made a huge stop when it mattered.”

The Falcons got a 4-yard scoring run by Brendan Goings to make it a one-score game.

West Henderson  had the ball again with a chance to get the win. The Falcons drove into the redzone, but the Mustangs defense forced a turnover on downs with four minutes left in the game.

Here is where we keep you updated on action throughout the night. We’ve got four teams from Rowan County still... read more