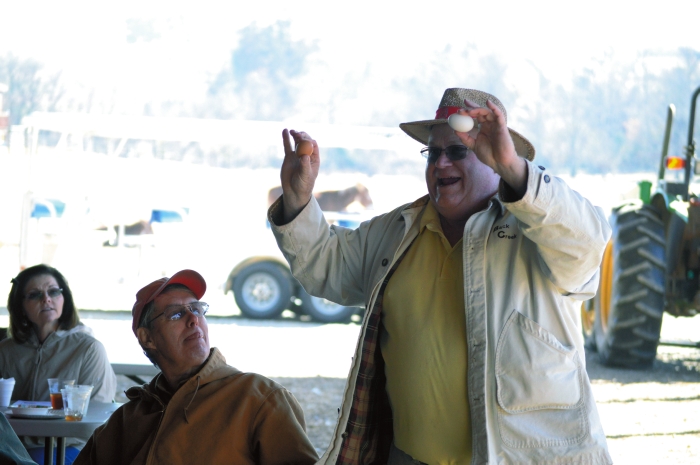 Josh Bergeron / Salisbury Post - Beef farmer and Piemont Research Station Superintendent Joe Hampton holds up two eggs as an example of why all people should be worried about feeding the world's population.

As the human population grows, both in Rowan County and across the globe, farmers are going to have to adapt to meet the growing demand for food, according to cattle farmer and Piedmont Research Station Superintendent Joe Hampton.

Hampton spoke to a group of about two dozen people Friday during Rowan County’s Farm-City Day. The event, held at Hampton’s Back Creek Angus Farm, began with a few award presentations before Hampton spoke.

The Rowe-McNelly Kiwanis Youth Development Award was presented to two Rowan county students —Jackson Noble and Makayla Rider. Both are 4-H club members. Noble raises dairy goats, while Rider competes in shooting spors. Rider will be on the first North Carolina pistol team, which will compete in a national competition in Nebraska next year.

With the award ceremony complete, Hampton stepped in front of the crowd, speaking about how the growing population may affect farmers in the future. He began by focusing on the beef industry.

“A lot of the cattle pastures that were once here no longer grow cattle, they grow houses,” he said. “The number of people that are interested in buying our bulls in North Carolina has decreased significantly since 1981 … We have the lowest number of cattle in this country since 1952.”

With a decreasing number of farms, Hampton said the world is seeing an increased population, which requires more food to be produced.

“If we’re selling bulls to people, and there’s fewer bulls than there’s been since 1952, we need to revise our business plan,” Hampton said about his farm. “I share that with you to tell you that we need to feed 9.2 billion people by the year 2050. That’s the number that we think about and that’s a responsibility that we have to be able to feed 9.2 billion people. To do that, we are going to have to do it different than we’ve had to do to this point.”

On each table sat a carton of eggs — some were white and some were brown. To Hampton, white and brown weren’t the correct terms. He said one is a country egg — brown — the other — white — is a city egg. Inside, though, Hampton said the contents are identical.

“There’s no such thing as a white egg once you take the shell off,” Hampton said. “Well I suspect we are all about the same. There’s a lot of differences in us, but in reality we all need to worry about feeding 9.2 billion people.”

He joked that hungry people are mean people, but also sternly stated feeding the world is necessary to enjoy everyday freedoms.

“It’s in all of our best interest to be able to feed those people,” he said. “We’re going to do it different the next 30 years as we’ve done it the last 30 years, but we’re still going to be trying to do the same thing.”