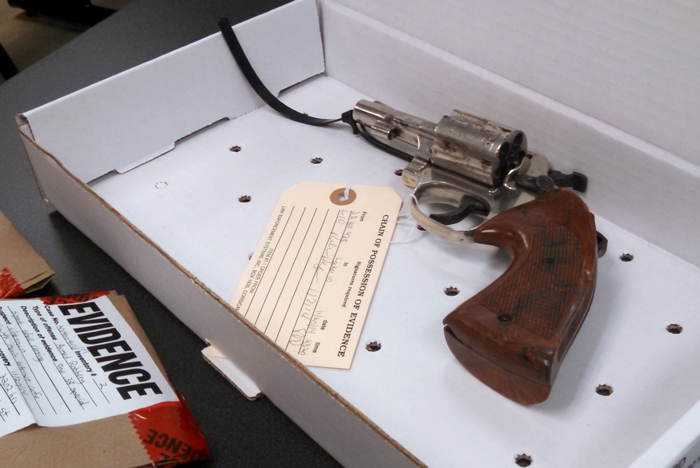 The gun used in an armed robbery at South Main Internet Sweepstakes. The robber got more than $700 in cash, but left his gun.

An armed gunman walked into the South Main Internet cafe Thursday night and demanded money from an employee, but ran out without his gun.

Salisbury Police say the incident occurred just before 10 p.m. at 917 S. Main St. in a tiny sweepstakes cafe just on the other side of Rick’s Barbecue and Grill. There were customers in the store when the man entered. He is described as a black male, wearing a bandanna across his face with jeans and a dark coat.

He ordered everyone to get on the ground and went straight to the counter. He pointed the gun at the employee and demanded she give him the money.

Police Capt. Shelia Lingle said the employee was nervous and dropped the money on the floor. She picked it up as he walked around and made everyone get on the floor.

He didn’t have a bag and began grabbing for the money. He dropped the money, placed the gun on the counter and bent down to pick it up. The employee picked up the gun and fired it, missing the robber as he ran out of the store. He was able to take $715 from the business. He left behind his gun, a Rossi .38 Special.

This comes on the heels of a letter Police Chief Rory Collins delivered this week to Internet Sweepstakes cafes. In the letter Collins explains the business is in violation of the N.C. General Statute making it a criminal offense to have an electronic machine or device for the purpose of sweepstakes.

He goes on to write on or after Jan. 1 the police department will enforce the law on anyone involved in activity that goes against the statute. He’s allowing them a “grace period” in order to make provisions to cease. If the businesses remain open, Collins said it could result in confiscating the equipment.

“This is the only notice you will receive from my office prior to our taking enforcement action under G.S. 14-306.4,” the letter ended.