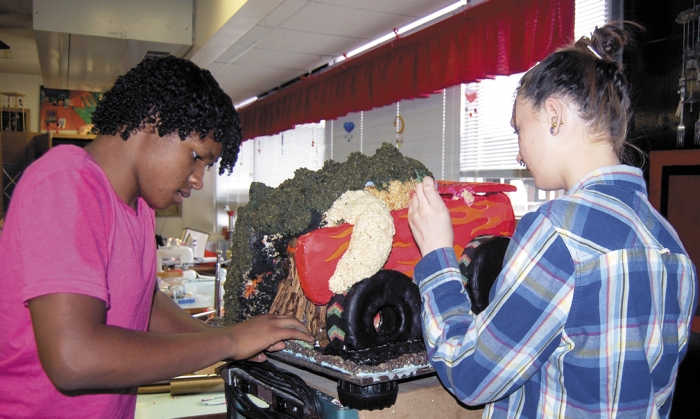 Mason White adds Rice Krispy treats to the base of South Rowan's gingerbread monster truck, while Aubree Pugh details the side of it. Jeanie Groh/Salisbury Post

The students are members of Rock the House – South Rowan High School’s family and consumer science club – and they were preparing for the National Gingerbread House Competition  at the Grove Park Inn in Asheville.

According to Edwards, many of the teens have been competing since they were young children, whereas for many of South Rowan’s participants, it’s their first time ever making a gingerbread creation.

Although the contest is called the National Gingerbread “House” Competition, entries are not limited houses.

Rock the House and Edwards’ Foods I class entered as teams in the teen category, which is open to students ages 13 through 17. The gingerbread creation must be entirely made by the students, with no help other than supervision from their teachers.

The creations could be no larger than 24 inches high, long or wide, and had to be displayed on a board base.

The structure must be  at least 75 percent gingerbread, and some of the gingerbread should be exposed. All components must be edible, except  for the board base.

Although the creations must be edible, it doesn’t mean they have to be tasty.

The students laughed at the thought of eating their gingerbread formations.

“It bakes hard so you can mold it,” student Mason White said, adding that since they’ve been working on their creations since September, they’re bound to be stale and maybe even soggy since they’re sealed in fondant.

“Hooter” the owl is composed of gingerbread, Rice Krispy treats and fondant – lots of fondant.

Kendall Howard and Connor Henderson had some difficulty deciding what to make. Their first two initial attempts failed, but when they decided to make an owl, something clicked.

The two used gingerbread as the base, and then rounded out the edges with Rice Krispy treats. Then, they created ombre fondant and hand cut all the feathers. Luster dust was added to give “Hooter” a special shine, and Howard and Henderson also made a flower for the owl’s head.

The two also created a nest for “Hooter,” made of chow mien and spaghetti noodles, cinnamon sticks, chamomile  tea, caramel and chocolate.

“It was a labor of love,” Edwards said.

According to White, it took eight days just to make the tires for “Monster Truck Madness,” a truck with a large monster resting on top. The piece was White’s brain child.

The monster’s body and head are made of gingerbread, rounded out with Rice Krispy treats. He’s covered in a concoction made of oatmeal, water and dye. His teeth and claws were made of fondant, and his eyes were made of gummy candies.

The students started working on their creations as early as September. Every day, anywhere from three to 11 students made their way to Edwards’ room after school to work on the projects.

They can even rattle off the recipe for gingerbread without a second thought.

All the hard work, dedication and preparation paid off – “Hooter,” “Monster Truck Madness” and “I Spy” all placed in the Top 10, and will be displayed at the Grove Park Inn until Jan. 3.

Edwards took 11 students to the competition at the Grove Park Inn.

In addition to attending the competition, they were able to visit the South Highland Folk Art Center on the Blue Ridge Parkway, eat at Mellow Mushroom and stop by the Mast General Store.