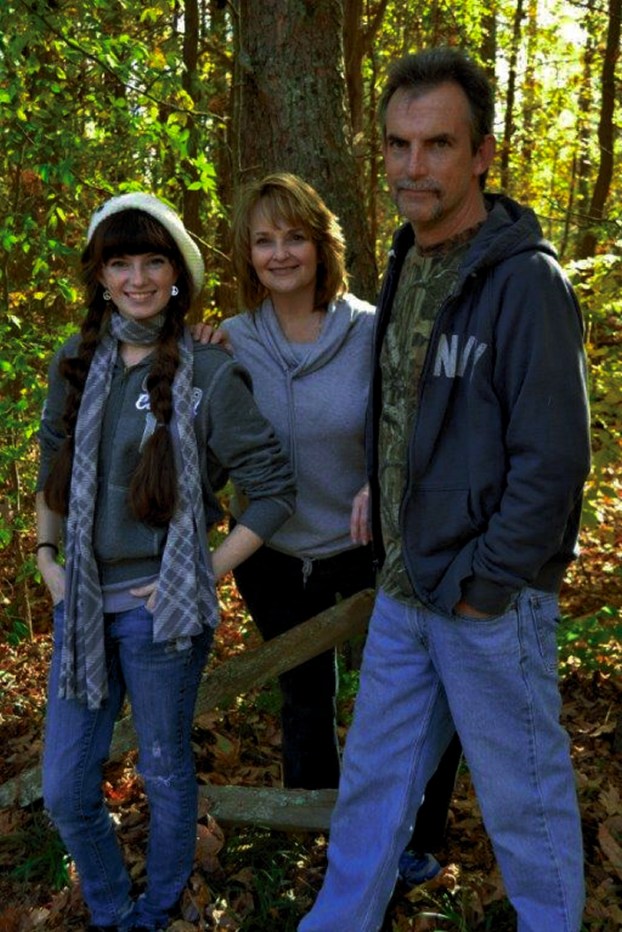 Davie Leasure, here with wife Kathy and daughter Veronica, has been fighting cancer in his abdomen. An upcoming 5K race will raise funds for the family.

David Leasure went to the hospital for simple hernia repair surgery in November 2011. Within a matter of hours, Leasure and his family were told that he had appendix cancer and had three months to live.

The cancer had spread throughout his abdomen. Doctors said the tumors were within two weeks of crushing Leasure’s organs.

Leasure was a truck driver for Freightliner, tasked with delivering new trucks. That quickly was forgotten as he, wife Kathy and daughter Veronica dealt with the devastating news.

David wanted only to see his daughter graduate from North Rowan High School in June of 2015.

The family searched for an avenue of hope and visited Dr. William Brinkley in Salisbury. Brinkley suggested that the family see a research team at Wake Forest Medical Center. Options were discussed that included very long and grueling surgeries, giving the Leasures at least a way to fight for David’s life.

Appendix cancer is usually unintentionally found when the patient is having abdominal surgery, MRI or CT scans. It only represents .5 percent of all intestinal cancers. There are no known risk factors. Signs and symptoms include appendicitis, bloating, increased girth, abdominal or pelvic pain, changes in bowel function and infertility.

The proper name for Leasure’s condition is appendix cancer with secondary peritoneal cancer, meaning that a tumor on his appendix had burst.

“The doctors told us that when the tumor burst, it was like throwing handfuls of rice grains all over the abdomen with each of them becoming another tumor,” Kathy said. “Some were only microscopic, while at least one was large enough that it required being held like a baby while it was cut out.”

Dr. Perry Shen and the research team performed the surgeries, the first lasting over 11 hours and the second 17½ hours. Shen, the appendix specialist at Wake Forest Medical Center, leads one of the few teams nationwide that are fighting this type of cancer.

During a total of eight surgeries, Leasure has lost his spleen, appendix, gall bladder, colon and much of his small intestine. He also lost the omentum, responsible for covering the abdominal wall and for protecting and padding the organs. The omentum was itself riddled with tumors. Two large areas of his diaphragm have been cut and built up with mesh to protect the heart while his liver has been resected several times.

Following the second long surgery, Leasure emerged with an ileostomy bag. The bag itself was temporary but the procedure to remove it after seven months started a long additional hospital stay.

“It was supposed to require three to four days but ended up a 33-day family vacation at Wake Forest,” Kathy said. “What was left of the small intestine kinked and emergency surgery was required to save the work already done. That surgery caused an abdominal hernia, which was where all of this got started with the first one.”

Veronica Leasure is a senior at North Rowan High School where the staff and students have rallied around her.

The Leasure family will be the recipients of the proceeds raised at the 2014 Cavalier Run/Walk for a Cure 5K on Nov. 22. Race director Kathy Pardue hopes to at least equal the turnout for the same event last year when the run/walk benefitted North Rowan staff member Kim Smith.

“Over 300 runners and walkers showed up to support Smith in her long battle against pancreatic cancer,” Pardue said. “We hope the community will join us here on Saturday. If you don’t want to run, then come walk for David. Or sign up as an honorary runner. Everyone is welcome. This will be a community celebration.”

All 5K participants will get a moisture-wicking, long sleeve shirt while they last.

Pardue has assembled door prizes that include a rear quarter panel off Childress Racing’s Jeff Burton car, gift cards, Betty Sedberry prints, a wreath, jewelry and gift baskets. Door prizes will be given out at the awards ceremony following the 5K.

Kathy said community support has meant a lot to the family.

“David, Veronica and I all agree that we have been very blessed,” she said. “The journey is hard, but the love and support of our family, friends, church family and co-workers — and so many prayers and concern from people that we don’t even know — are the real blessings.

“My daughter says it is the little things that count, and she’s right. Every time we say goodnight, pray together or simply watch a movie, we realize the wonderful gift that we have to be with one another.”

All the Leasures plan to be at the race on Saturday morning, and David expects to be the official starter.

Kathy added, “It’s just knowing that there are so many people that support us in our battle that helps to brighten even the darkest days.”

By Susan Shinn For The Salisbury Post David Freeze knows a bit about perseverance. That’s why the title of his... read more