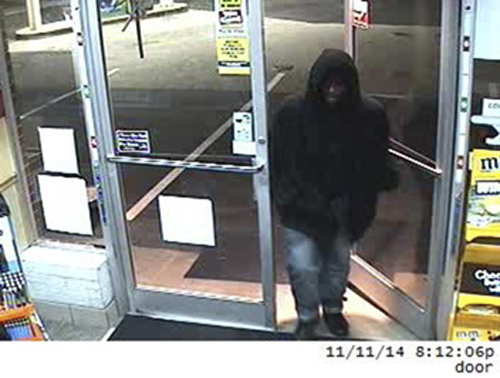 A video still image of a man who jumped the counter at the BP convenience store Tuesday night and placed a gun to the clerk's head. Submitted photo

A convenience store clerk got a close encounter with an armed robber who took an unknown amount of money from the register.

Salisbury Police are looking for a man who walked into the BP store at 1901 West Innes St., across from Walgreens, around 8:15 Tuesday night and jumped the counter. The clerk told police she saw the man walk into the store, but all of a sudden he was over the counter.

The man pulled out a black handgun, which he held to the clerk’s head. Police said he pressed his face against teh clerk’s while holding the gun on her. He was described as a black male who was wearing a black hooded sweatshirt.

He demanded money from the register, which she gave him. He hopped back over the counter and ran out of the store. A police K-9 tracked the robber to a location near Mahaley Avenue and Knox Middle School before losing the trail.