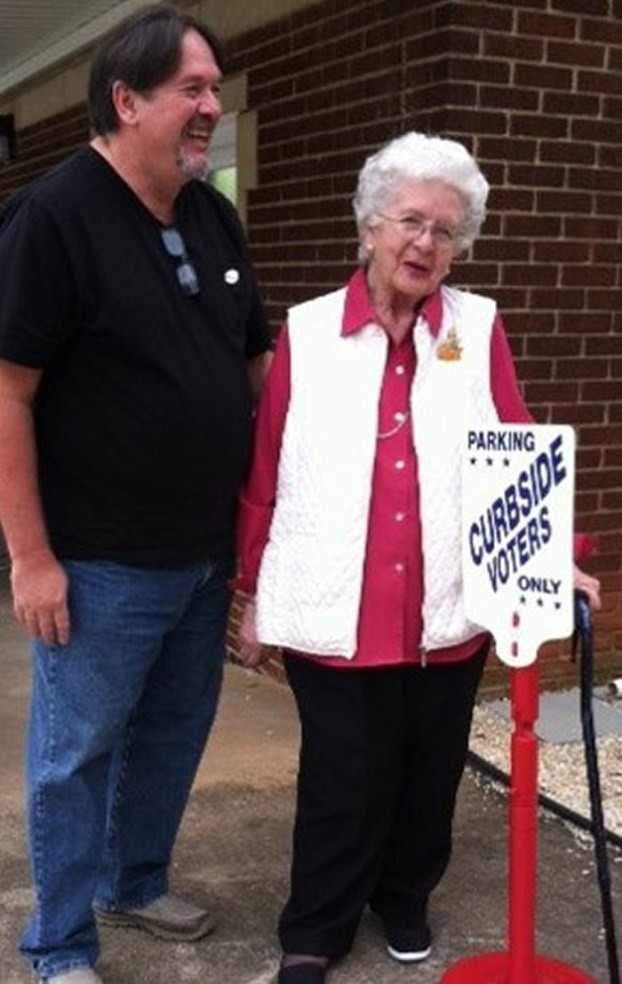 Submitted photo Nina, age 89, says “If you don’t vote then you can’t complain.”

My beautiful mother-in-law Nina donned her voting clothes and matching lipstick. At eighty-nine, she voluntarily gave up driving last year. So we made a date to take her to the polls. Voting is very important to her. For as she often says, “If you don’t vote then you can’t complain.” Lord knows I don’t want to lose that privilege. So off we went.

It’s getting harder and harder for her to move about. But her mind is still very sharp. Sitting in the booth she studied and marked each side of the long ballot. David and I stood at a booth together next to her, helping each other and checking our notes.

When we finished, he asked if she needed any help. A firm “No.” came her reply. Proudly she finished then placed her ballot into the machine that looked suspiciously like a shredder. She nodded and smiled at the elderly veteran who guarded the ballot box. From the same generation, these two shared the silent wisdom that comes only with decades of living. “Men and women fought and died for my privilege to vote. I can’t believe there are people who don’t bother going to the polls.” Her conviction rang true.

On the way home we took a little tour of Fulton Street with all its beautiful fall foliage. Down several side roads we drove slowly admiring the lovely view. “Go down Church Street” she requested. I’ll show you where we lived when your dad got home from the war. She recalled each neighbor and how hard it was to get a decent apartment back in the day.

As we drove through Salisbury, candidates’ posters waved and beckoned from every corner. Though politics can be very divisive, this one thing I think everyone can agree on: Aren’t you glad the political ads are over for now? My mom-in-law offered this wisdom on that subject. “I wish it were against the law for candidates to say anything about their opponents. If they were only allowed to speak of what they personally plan to do if elected, things wouldn’t get so ugly.” Sounds like wisdom to me.

Recent reports indicate the campaign spending between Hagan and Tillis for NC Senate alone is the first to cross the $100 million dollar mark. That’s one hundred MILLION with like seven, no… eight zeros.

I have another idea. What if a candidate put that money to good use in the state, say perhaps the school system? What our teachers could do with just a portion of a hundred million dollars! They’re so used to pinching pennies, no telling what wonderful new things could be accomplished in their classrooms. I dare say the politician who pledged that donation in lieu of bombarding the airwaves and mailboxes would win hands down.

That’s my current soapbox. And according to my mom-in-law, since I voted I still have the right to complain. I hope you voted too. I’d sure hate for Nina to hear otherwise.

‘Murder at the Mansion’ to benefit Lee Street Theatre

This week, enter the world of Jay Gatsby: a jaw-dropping home, a delicious meal, intriguing guests and, of course, murder.... read more