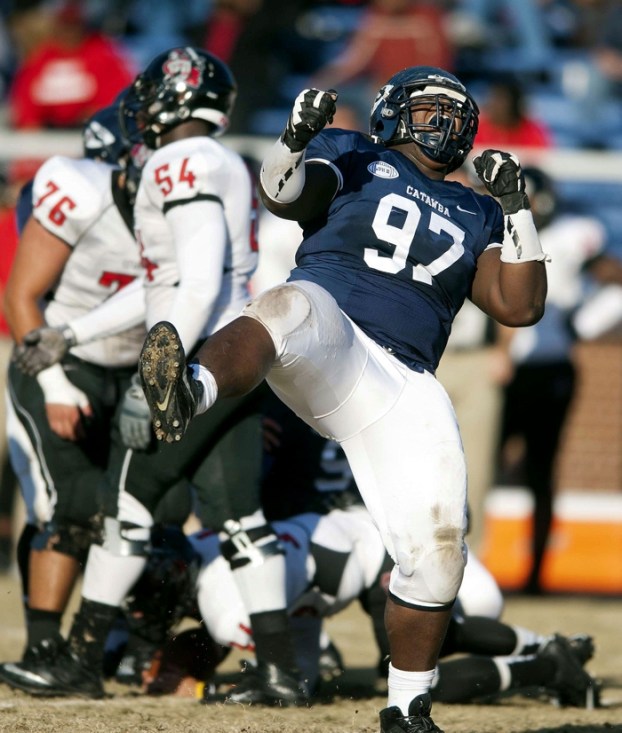 JON C. LAKEY / SALISBURY POST Catawba's Stephen Davis (97) reacts after a quarterback sack in the back field. Catawba College played their last home game of the regular season with a 28-17 win over North Greenville University. Saturday, November 8, 2014, in Salisbury, N.C.

SALISBURY — North Greenville was knocking on the door with first-and-10 at the Catawba 11 and was determined to retake the lead at Shuford Stadium, but the Indians’ veteran defensive line came through.

Derrick Lee stopped a running play for a short gain, then senior Stephen Davis stuffed two more. On the game’s pivotal snap, fourth-and-2 at the Catawba 3, senior Gabe Evans halted North Greenville back Simeon Byrd 2 yards short of the end zone and a yard shy of the first-down marker.

Catawba protected a 21-17 lead with that defensive stand and went on to a 28-17 victory in the home finale that guarantees a second straight winning season.

“I was able to grab the ballcarrier, and then it was like all my teammates got there at once to help out,” Evans said. “When you’re a senior, it means everything to win the last home game.”

It meant a lot to a lot a people. Catawba is 6-4 in a season in which it had only four home games.

“We didn’t take care of the home games last season,” head coach Curtis Walker said. “This time we defended the home front. We went 3-1. Even the one we lost (to Carson-Newman), we played well.”

Senior Day began with reserve quarterback Richard Shuping, a senior, handing off to senior running back Trey Mashore, who plowed for 5 yards. The Indians went on from there.

The teams entered with identical records and were evenly matched. A 62-yard Catawba march to open the game was answered immediately by an 84-yard kickoff return by North Greenville’s Cedric Proctor that made it 7-7.

It was 14-14 after Byrd scored on the ground, and Sheehan responded with a 25-yard scoring pass to running back David Burgess.

The Crusaders (5-5) used a field goal by Justin Gravely to claim a 17-14 halftime lead.

“What we talked about halftime is that when we got the lead back we were going to keep it,” Walker said. “That was the mindset we wanted to have. We were underdogs today, not a lot of people gave us a chance, but we were not going to allow our seniors to lose this game.”

Catawba took a 21-17 lead with an 85-yard, third-quarter drive that included a 28-yard completion by Sheehan to senior tight end Tyler Hamilton on third-and-11. Mashore churned down to the 3 with bruising runs. Sheehan scored the go-ahead TD from there.

That huge defensive stand at the Catawba 2 came next. Then Littlejohn broke a long jaunt nearly to midfield to get the Indians out of a dangerous hole.

“That run was all the offensive line — no one touched me,” Littlejohn said. “We got momentum with the defensive stop and then our offensive line took control of the game. There’s no better feeling than knowing you are controlling the ball like that. You can see the opposing defense saying, ‘There’s nothing we can do.’”

Catawba scored the clinching TD in the fourth quarter by pushing 76 yards. It was mostly grinding, downhill runs, but Sheehan mixed in a 20-yard pass to Carlos Tarrats, who made a terrific catch on the sideline for first-and-goal at the North Greenville 3.

Catawba’s defense ruled the second half, tossing a shutout. Linebackers Kyle Kitchens and Edward Robinson IV went after Hughes on two obvious passing situations and were rewarded with sacks.

“The times North Greenville hurt us in the first half were when their quarterback scrambled and made a play on the run,” Walker said. “We did a better job corralling him in the second half. We didn’t let him escape.”

North Greenville’s last gasp came when Catawba cornerback Mark McDaniel denied a completion on a fourth-and-10 play at the Catawba 15. Then the Indians ran out the clock on the ground.

“What mattered was getting this one for our seniors,” McDaniel said. “We played a very good second half. We need to play like that the whole game next week against Lenoir-Rhyne.”