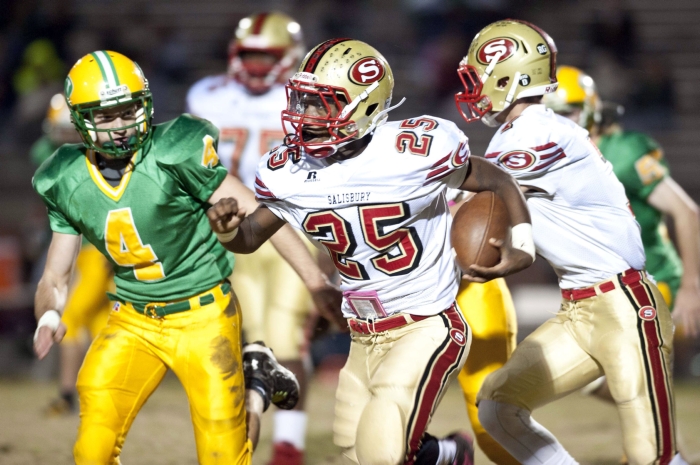 TYRO — It was raining so hard, Salisbury defensive back Darius Jackson was struggling to see, much less talk, but he was practically bouncing around with joy.

“This team has made a great comeback,” said Jackson, who picked off a West Davidson pass on the final play of Friday’s soaking-west contest at Glosson Stadium.  “We started out slow with a tough non-conference schedule, but we knew that once we got into conference, we’d win ballgames. And now we’re playing for the conference championship.”

Jackson’s assessment of the situation is accurate. Salisbury’s 37-14 win at West Davidson was often sloppy, but the Hornets (5-5, 4-0) will be at home next Friday when they take on neighbor and rival North Rowan with the Central Carolina Conference title on the line.

“We’re where we want to be, playing for a championship,” said subdued Salisbury coach Ryan Crowder.  “But we need to play a lot  better than we did tonight. We stopped ourselves a lot.”

The Hornets began like they’d win 99-0. The defense forced a three-and-out,  and the Hornets methodically pounded for six points. Antwond Glenn scored from the 11, the first of his three touchdowns.

“There were times when there wasn’t a hole where there was supposed to be a hole,” Salisbury QB Riley Myers said. “But Antwond just found somewhere else to go.”

After West Davidson back Justin Bennett was buried for a safety and Glenn broke a 31-yard scoring run on the Hornets’ first snap after the free kick,  it was 14-0 midway through the first quarter.

“We came out like gangbusters, but then we kind of relaxed like we thought it was going to be easy, and we lost our way,” Crowder said. “It’s not  ever going to be easy against West Davidson. They play their hearts out down to the last second.”

Tackle  James Kinsella recovered a Salisbury fumble, a play that led to West Davidson getting  on the board in the second quarter. QB  Carter Beck hit Kyle Smith with a 5-yard scoring pass. After Beck ran for a two-point conversion, the Green Dragons were within 14-8.

That should’ve been the halftime score, but instead it was 23-8. When West Davidson had a drop on a well-thrown ball by Beck, the Dragons had to punt with 30 seconds left in the half.

When the punt-snap went awry, Salisbury collected its second safety of the half.

Then the Hornets returned the free kick past midfield, and Myers hit Will Steinman for a backbreaking 45-yard touchdown pass 10 seconds before the break.

“I was reading the safety and Ryan Jones took him deep,” Myers said. “Then Will broke open underneath.  It worked  just the way it was supposed to.”

Nick Austin and Glenn added rushing TDs in the second half for the Hornets. The shifty Beck broke a 35-yard scoring scamper for the home team.

Brame Boyd had a sack for West Davidson. Kinsella recovered two fumbles, while Cason Fowler got one.

Jordan Oglesby had two sacks for Salisbury. D.J. Alexander had a pick. He reached over Jackson in the end zone to snag that one.

“It was pretty slippery and messy out there,” Jackson said. “But it was fun. We  got a win we needed to get.”