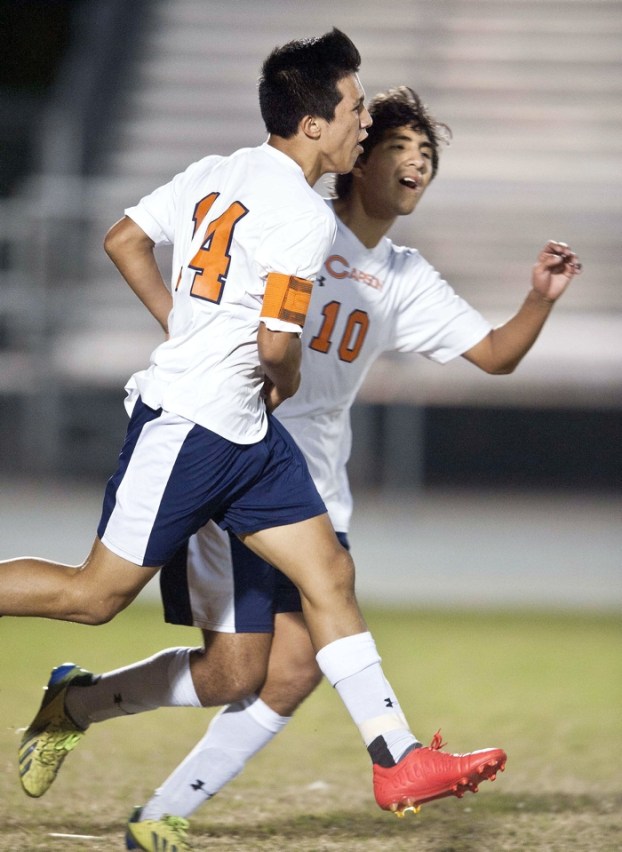 The Cougars didn’t exactly hit the ground running in their 3A state playoff opener, but they emerged with an efficient 2-0 victory against visiting No. 29 Ashbrook.

“A win in the playoffs is a win in the playoffs,” coach Justin Buckwalter said. “It’s never easy. You come out and play hard and do your best. Ashbrook kind of parked the bus in front of the net and that made it tough for us in the first half.”

Carson has a date with No. 14 Marvin Ridge, the defending state champion, in the second round.

Ashbrook (11-12), a member of the 2A/3A Big South Conference, quickly realized it had to stop Carson sniper Brandon Flores.

“We had heard a lot about him,” said junior sweeper Michael Mosk. “We used five defenders in the back and our plan was to keep the ball away from him. If he got anywhere near it, we just wanted to kick it out of there.”

That strategy worked until early in the second half, when Flores scored twice within three minutes to provide all the juice the Cougars needed. They played shutdown defense, allowed just seven shots at goal and were never really threatened. Sophomore keeper Grayson Owens was credited with four saves as Carson registered its fourth straight win and sixth shutout.

“We put high pressure on the person receiving the ball,” said defender Fidel Flores, Brandon’s older cousin. “Whoever got it, we weren’t going to let them turn.”

Carson was kept off the scoreboard in the first half, though Brandon Flores thrilled the lively crowd with a couple of near misses. First he found some operating room in front of the net, but lifted a shot wide to the right side in the 15th minute. Then with 8 minutes, 10 seconds remaining in the half his blast from close range deflected off the leg of Ashbrook keeper Tyler Brown, ricocheted off the right post and settled out of bounds.

“We were taking lots of shots,” Buckwalter said. “We just weren’t finishing on our chances, weren’t getting it on frame. And they were packing it in the whole time, but we all had a feeling it would come.”

It did — on a controversial goal seven minutes into the second half. Carson junior Colton Correll initiated the play when he sent a 50-yard lead pass down the left sideline. Flores chased it down near the end line, shed a defender and rifled a low shot that caromed off Brown, nudged the inside of far post and dropped into the cage.

“He kept the ball in play and did what he had to do,” said Ashbrook coach Joel Webb. “He’s a good little striker who can score.”

At question was whether Flores had indeed kept the ball in play.

“It was an entire rotation over the line,” said Mosk, who had a front-row seat. “It was all the way out, but there’s nothing you can do. It was just an unlucky non-call.”

Flores said the ball was on the line, but never went out-of-bounds.

“They all stopped, but I kept going,” he said. “I was playing the whistle.”

Carson nourished its lead just 2:42 later when Flores settled a cross-field pass from Correll, got by a defender and raced to the top of the box. Brown met him at the 18-yard line, where Flores left-footed a long ground ball that found the unguarded net.

“It was a wall pass, a 1-2,” Correll said. “In the second half we were able to spread the field and distribute the ball. That’s how we beat their defense. And Brandon, he just knows what he’s doing.”

NOTES: Round 2 must be completed by Saturday, which is when Carson likely will host Marvin Ridge (14-7-1), a 3-0 first-round winner against South Iredell. The Cougars beat Marvin Ridge 2-1 in their season-opener.