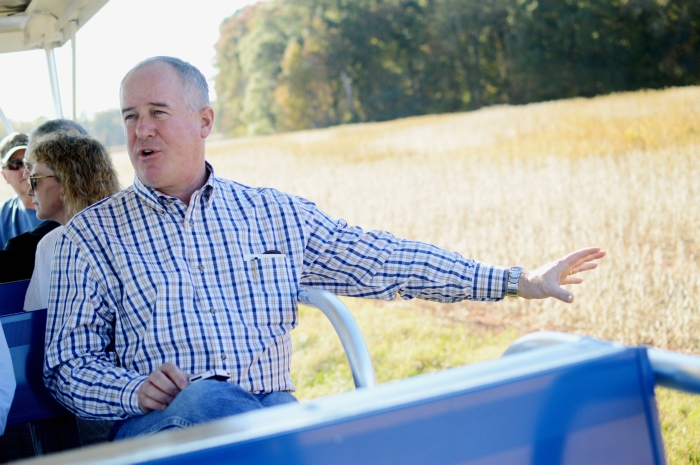 The state and nation’s top Farm Service Agency officials took a field trip Monday to the Piedmont Research Station, touring the facility and even riding a self-driving tractor.

Along with a handful of local farmers, Farm Service Agency Administrator Val Dolcini and N.C. Farm Service Agency Executive Director Bob Etheridge toured a portion of the 1,054-acre facility, taking a particular interest in a small tract of blueberries, which are unusual to the Piedmont Region.

“It’s really important that the investments we make as a nation and to research stations like this one here bear fruit not just for the farmers of North Carolina but the farmers and ranchers all over the country,” he said. “I’ve got responsibility for all 50 states and over 2,100 offices in the agency, so it’s important for me to stay connected to the people that work for FSA and the people that depend on them. My experiences in Washington are fantastic and that’s where we create the policy for the nation, but this is really an opportunity to see the policy put into practice.”

Dolcini said he’ll also visit Mississippi and Texas as a part of a multi-stop trip, but Monday was his only visit to a North Carolina research station.

It was Dolcini’s first visit to Rowan County.

Etheridge, on the other hand, said it’s his third visit to Rowan County since he became the head of North Carolina’s Farm Service Agency in late 2013. He echoed, Dolcini, saying it’s important to know how policy affects consumers and farmers, but also talked about the research station’s blueberry experiment.

“Blueberries by and large enjoy sandy soil down east and I was surprised to see them,” Etheridge said. “I think it’s great because what you’re talking about is an opportunity to develop a new product. It reinforces for me, and should for the taxpayers, is why it’s important to have research.”

He added that successful research leads to benefits for consumers.

Piedmont Research Station Superintendant Joe Hampton described the blueberry research as an experiment to see whether the plants can survive in a different type of soil than typical for North Carolina. Hampton said successfully growing blueberries in the Piedmont would help both consumers and producers, but also described a change that the different soil composition is having on the plants.

“The plant that is not growing in an environment that’s natural to it produces more of those (nutrients) to protect itself,” Hampton said. “It’s stressed a little bit, just like our bodies when we are stressed and produce more chemicals. The preliminary data says that our blueberries are a little bit better because they are a little bit stressed.”

After spending more than an hour showing Dolcini and Etheridge around the research station, he also talked about the fact that the pair simply visited to learn about the station’s operation.

“I appreciate the fact that he didn’t come here to put out a fire,” Hampton said about Dolcini’s visit. “He came here to learn. We just showed him what we do and that’s something that I enjoy; I enjoy what we do at the research station.”