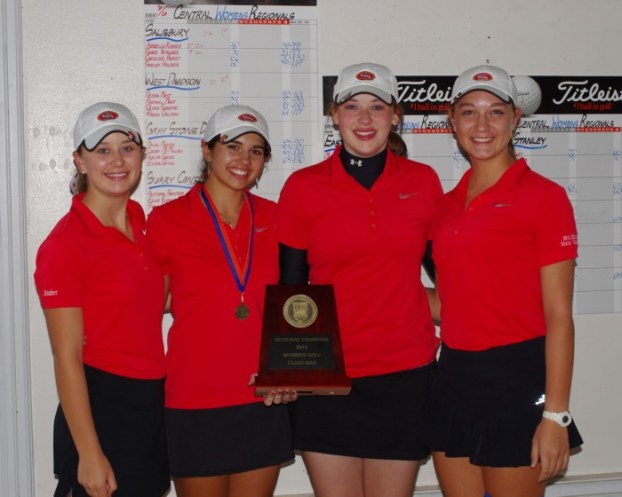 Salisbury girls golf coach Dale Snyder was just glad to get back from Mount Airy in one piece — and with his team still moving forward.

The Hornets did what they needed to do. They won the 1A-2A Central Regional at Mount Airy’s Cross Creek Country Club, and they’ll advance to the state event at Foxfire in Pinehurst.

Grace Yatawara shot 77 for medalist honors, while Isabella Rusher shot 78 for runner-up status. They went 1-2 like they just about always do, although there were some unexpected struggles,

Yatawara overcame a triple bogey and two double bogeys, but was efficient on the other 15 holes.

Rusher, a senior committed to Richmond, had to overcame back pain.

“It was bad enough on the front side that she might have withdrawn if it hadn’t been the regional,” Snyder said. “As the weather warmed up, it loosened up some for her. Then it got stiff again while we were waiting around for all the scores to come in.”

Three scores count in girls golf. Shelby Holden’s 119 was enough to make the Hornets regional champions by a comfortable margin.

“Shelby she gutted it out and played well,” Snyder said.

Scores were high. The third-best score of the day was the 86 posted by East Surry’s Madison Moore. Only three girls broke 90.

“It was one of the most difficult courses I’ve ever seen,” Snyder said. ”Tough pin placements. Very small landing areas. Hazards jumping out from all over the place. It was almost unfair.”

Only 37 girls competed in the regional. Small numbers and a taxing course meant that the cutline for state qualification fell at 127.

Salisbury’s fourth golfer, Caroline Parrott, didn’t qualify, so the Hornets will have only three competing in the state tournament when they shoot for their fourth consecutive title.

Rusher has won two individual championships and was runner-up in 2013.

“Hopefully, Isabella is going to be fine, but if anything goes wrong — if someone steps in a hole or something — we won’t even have a scorecard,” Snyder said. “That’s scary.?

For two sets, No. 10 Salisbury looked like it was going to cruise past No. 23 R-S Central to the... read more