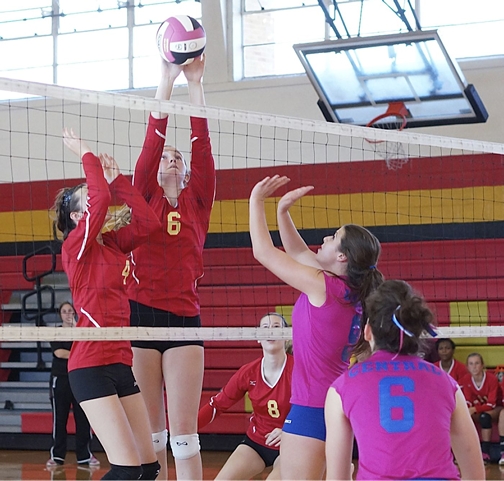 Photo by Jimme Anderson Salisbury's Juliana Anderson (6) gets the block after R-S Central's Emily Wilson (9) tried to hit it over Anderson and Makayla Dillon (4) on Saturday in the first round of the 2A state volleyball playoffs. The Hornets defeated the Hilltoppers 3-2.

For two sets, No. 10 Salisbury looked like it was going to cruise past No. 23 R-S Central to the second round of the 2A state playoffs. Then for two sets, it looked like maybe the Hornets shouldn’t be in the playoffs. The Hornets, led by Juliana Anderson, stormed to the first-round victory Saturday by winning the fifth set 15-5. Anderson supplied three kills, three stuff blocks, two aces, and R-S Central committed a pair of errors on two serves by Anderson.

“The fifth set, it was either you win or you lose,” Anderson said. “So we went out, and we tried our best, and it worked. I was on an adrenaline rush (after a raining third and fourth sets).”

“We’ve never gone to the second round of the playoffs,” Maddie Gentry said. “This is crazy. I’m shaking right now.”

Saturday’s victory was the end to a stressful match for coach Mallory Hodge.

“It was a struggle for a little bit,” she said, “but it wasn’t a surprise it went to five sets because this team likes to give me gray hair.”

After winning the first two sets, the Hornets (15-10) had almost nothing go their way in the third and fourth sets.

R-S Central went on a 16-4 run in the third to build a 19-7 lead. Attacks by Teja Twitty at the net starting dropping, and the Hornets committed plenty of errors. Salisbury had 11 errors in the set that put points on the board for the Hilltoppers. R-S Central clinched the 25-10 set victory on an error by Salisbury’s Mary Seifert.

Twitty was in charge of the fourth set. She got eight points for the Hilltoppers by a combination of kills and stuff blocks. Like the third set, the fourth ended on an error by the Hornets. Jane Miller bumped the ball right into net, and the Hilltoppers won 25-16 to tie the match at 2.

“It was very stressful,” Gentry said. “I was like (to the team), ‘Have a short memory. We have to forget.’ So, the fifth set, we went out and we forgot and we came out and we definitely did what we were supposed to do.”

Salisbury’s defense at the net made a big improvement in the fifth set. Twitty and Kinsley Buchanan could not convert their attacks into points. Anderson provided two stuff blocks and three kills as the Hornets seized a 7-1 lead. After a kill by R-S Central’s Candace Simmons made it 7-2, Anderson responded with a kill, two aces, and two of her serves induced R-S Central errors for a 13-2 lead.

“Juliana stepped up,” Hodge said. “She struggled a bit in the fourth set, and it’s just she decided to play and took it to a whole other level.”