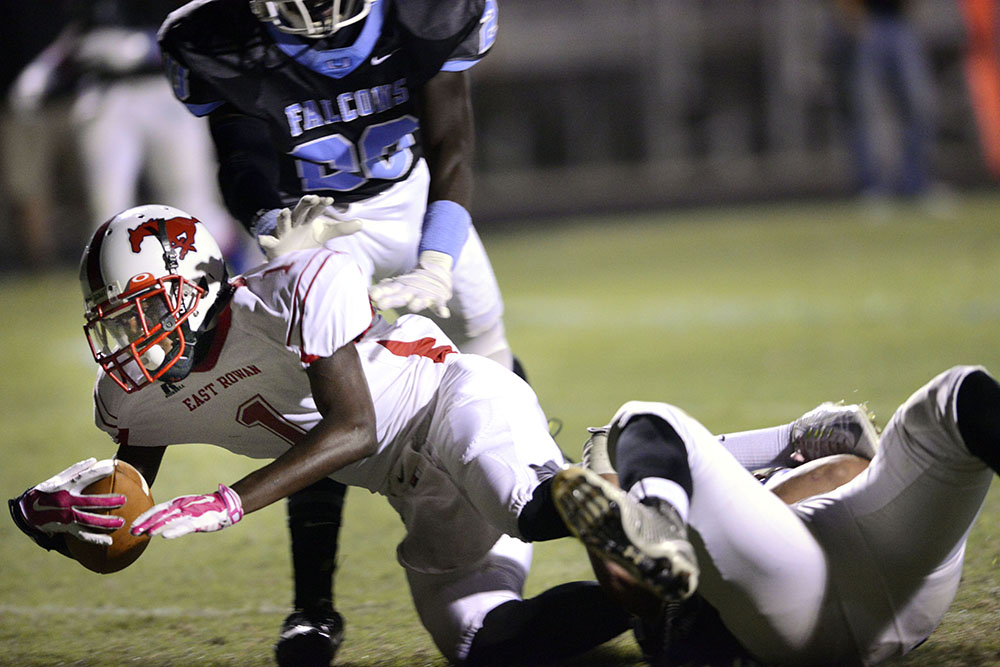 MOUNT ULLA — It was a game that defied logic, and it was all but over after the first quarter.

East Rowan put up an improbable 38 points in the first quarter and cruised to a 59-14 win against cross-county rival West Rowan on Friday. The two teams have met almost 50 times over the decades and this one was no doubt the most lopsided win ever by the Mustangs.

With Samuel and Seth Wyrick, halfback Max Wall and receiver Naquis Caldwell providing the offensive fireworks, East Rowan scored five touchdowns in the decisive first quarter. The defense was just as impressive with a pair of safeties and a fumble recovery in the opening period as well as a pair of interceptions later.

Senior quarterback Sam Wyrick passed for 186 yards and five touchdowns while his twin brother Seth Wyrick broke a long-standing school record for career receptions with four catches for 116 yards and three TD’s. Caldwell had touchdown catches of 17 yards and 1 yard as part of the fast start.

Wall, a sophomore, showed his versatility by breaking a 50-yard scoring run and returning a punt 61 yards to set up another score. He capped his effort with a 38-yard touchdown pass out of the wildcat to Seth Wyrick to make it 38-0.

The catch by Wyrick broke an East Rowan record for career receptions set in 1970 by Johnny Yarborough. He tied the record earlier in the first quarter with a 53-yard TD pass reception from Sam Wyrick.

“I can’t believe I got the record on a touchdown pass,” Seth said.

He said it was “bittersweet but still incredible” he broke the record on a touchdown pass from Wall.

The win enabled East Rowan (4-4, 3-3 SPC) to put itself in a great position for a playoff slot. The stunned Falcons (6-2, 4-1) had visions of a league title dampened as they gear up for a showdown at league-leading Concord next week.

The horrible start for West Rowan and the lopsided loss was just that as far as coach Scott Young was concerned.

“We are not into excuse making,” Young said. “Sometimes you just have to be a man and credit the other team. I thought they played with more heart and more desire.”

Mustang coach Kenneth McClamrock refused to see the outcome as a surprise or an upset.

“It was exactly what we expected and nothing surprised me about tonight’s game,” McClamrock said. “They are a good football team but East Rowan is a good team too, and we showed it tonight. We are a team that other teams are going to have to worry about in the coming weeks.”

The East lead reached 45-0 by halftime as tight end Simon Soles caught a short TD pass from Wyrick. The big margin required a continuous running clock in the second half by state rule. West did finally get on track a bit in the second half with a pair of touchdown runs by quarterback Kacey Otto, but East Rowan countered with two more scores.

“We work hard enough that we feel like we can beat anybody we play,” Sam Wyrick said. “We needed to prove it tonight against a good team and I think we did,”