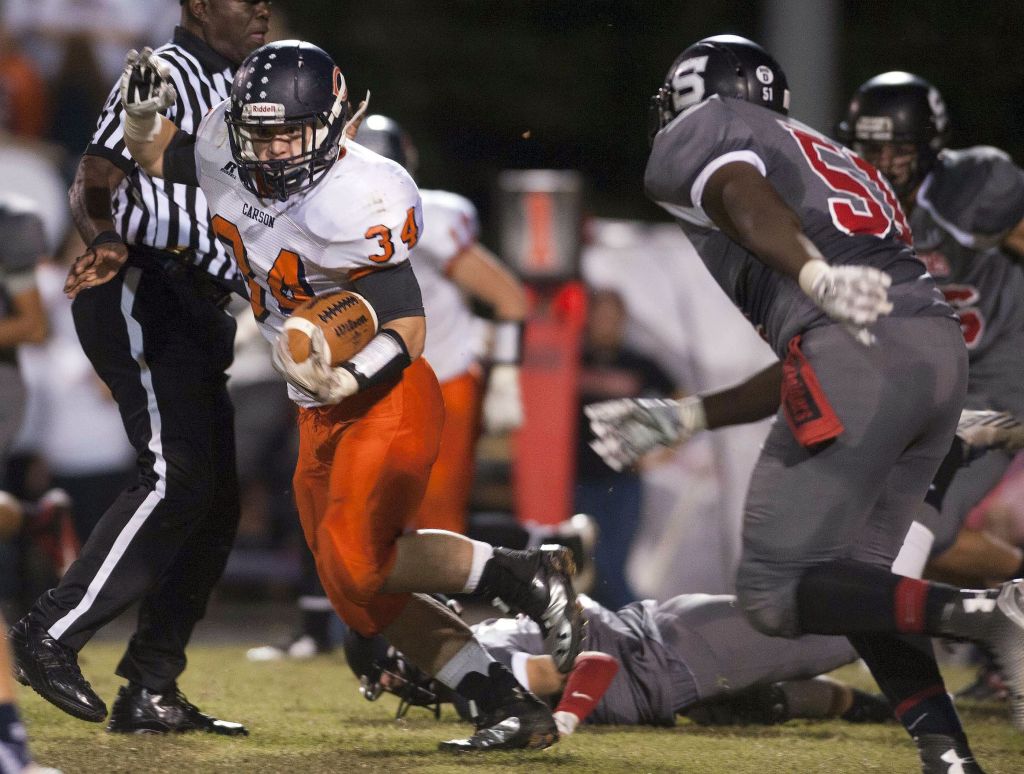 LANDIS — It was no surprise that Carson racked up almost 400 yards rushing Friday in their 36-13 win at South Rowan. That is what the Cougars do to a lot of opponents.
But when Carson opened the game with a no-huddle passing attack, the host Raiders were caught flatfooted and never recovered.
“That was the game plan” said quarterback Andy Lear. “We figured it would work good because we usually don’t do that.”
Lear executed a perfect play action pass on the first play of the game that found running back Darren Isom racing down the middle of the field at least 10 yards behind the South Rowan defense. The play went for 47 yards down to the Raider 33.
“It was a play we had been working on all week and coach Pinyan said it would work,” Isom said. “It was a great start and it was great to have a W under our belt again.”
Two plays later, Lear teamed up with receiver Brandon Huneycutt on a screen pass to the right that went 31 yards for the score to make it 7-0.
The quick score less than a minute into the game enabled Carson (3-4, 2-2) to seize momentum and never let it go. After that, the Cougars’ running attack of Isom, Brandon Sloop and Dylan Livengood resumed its usual mode with a remarkable 61 carries for 390 yards. At the same time the Carson defense stifled the Raiders (2-5, 1-4), holding them to 139 yards of total offense and a pair of field goals until late in the game.
The only player Carson could not contain was South Rowan kicker and receiver Brennan Lambert. Lambert achieved the rare feat of scoring all 13 of his team’s points. He booted field goals of 37 and 35 yards in the first half then late in the game he caught a 24-yard TD pass from reserve QB Austin Chrismon and added the extra point as well.
“That was something else, that was awesome,” said Lambert of his first-career high school touchdown. “I was able to get open and the ball was there.”
The impressive offensive numbers, however, belong to Cougar runners Sloop (154 yards), Isom (140 yard) and fullback Livengood (42 yards). Isom scored twice while Sloop and Livengood had one TD each.
“Our backs ran hard and our offensive line did a great job,” Carson coach Joe Pinyan said. “It was a great bounceback win and our kids responded well.”
Carson snapped a two-game losing skid, including last week’s deflating double-overtime loss at West Rowan. Pinyan said the Cougars put the loss behind them and have to keep looking to the future.
After taking the quick lead early, Carson went up 14-3 late in the frst quarter when Isom broke free up the middle for a 29 yards scoring romp. They then put together a 10-play, 73-yard drive late in the second quarter to take a 22-3 lead. Isom scored from 11 yards out and Anthony McCurry ran in the two point conversion.
South Rowan was able to close it to 22-6 just before the half when defensive lineman Grex Urey pounced on a Cougar fumble at the 20. With the clock running down in the half, the Raiders settled for Lambert’s second field goal.
A pair of touchdown drives in the third period, both of which included key fourth down conversions, put Carson well ahead and 36-6.
The first was a 61-yard drive capped by a fourth-and-1 play that saw Sloop power up the middle for a 33-yard score. A 25-yard punt return to midfield by Travis Littlejohn set up the final Carson score.
Isom broke off tackle for 42 yards to the South Rowan 1 on fourth-and-2. Livengood then scored from the South Rowan 1 with 1:36 left in the quarter. Cole Howard converted his fourth PAT of the game to make it 36-6.
Carson appeared ready to add another score after anothert long drive to open the fourth period. But after reaching the South Rowan 2, Sloop lost the ball trying to score and it rolled out of the back of the end zone.
Both teams went to the benches after that and South Rowan was able to get its only TD with just over two minutes left. Reserve quarterback Austin Chrismon rolled right and found Lambert open in the back of the end zone for the score.
“They played us well,” South Rowan coach Jason Rollins said. “Our kids left everything on the field by the end and I am proud of them for that. If our players leave everything out there, success will come.”
Carson returns home next week to face South Piedmont Conference leader Concord. The Raiders travel to Central Cabarrus.