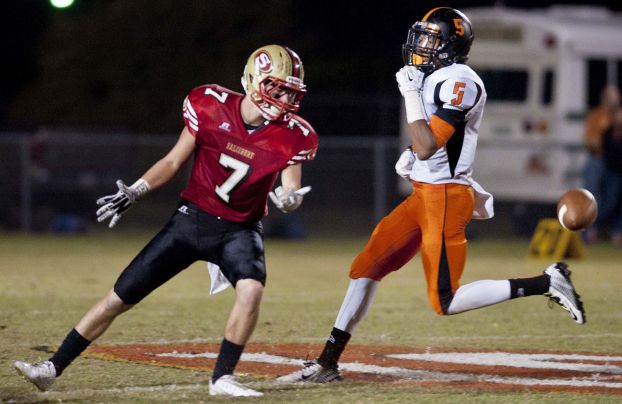 It’s Week 8, and the six-team CCC finally starts league play with North Rowan at Lexington and Salisbury at East Davidson. Assuming they don’t get another half-dozen guys hurt, the Cavaliers should start rolling toward another conference championship.
In the nine-team SPC, teams already have played three of four league games. West Rowan is 3-0 in the SPC, but the tough part of the league schedule is still ahead, starting Friday with Central Cabarrus. Carson is at South Rowan in a matchup of teams that are 1-2 in conference play, and it’s obviously a must-win for both. Neither is out of it. Three SPC teams finished 3-5 and still made the playoffs last season. East Rowan, another 1-2 team, won against Cox Mill, a wild victory that’s looking bigger after two straight Cox Mill romps. East Rowan is favored tonight for the first time since it played Salisbury on Aug. 29. Struggling Northwest Cabarrus visits the Mustangs.
A.L. Brown couldn’t stop Vance last week, but the Wonders should get well against Robinson. Davie gets a night off after allowing a staggering 117 points in its last two outings.
Carson (2-4, 1-2 SPC) at South Rowan (2-4, 1-2 SPC)
While the teams have identical records, the general perception is that Carson is three or four touchdowns better than the Raiders.
Carson has the county’s top rushing offense, with Brandon Sloop and Darren Isom combining for 1,466 rushing yards and 22 rushing TDs. Sloop is fourth on the county’s all-time rushing list.
South Rowan’s defense has been good at stopping the run this season, but the Raiders are coming off a 55-0 loss to Cox Mill, have been plagued by special-teams issues and have produced just 270 rushing yards all season.
Carson’s defense is better than the stats look, and it might shut out the Raiders.
Carson walloped the Raiders 48-6 a year ago. Carson has won the last four meetings and leads the series 4-3,
Central Cabarrus (4-2, 1-2 SPC) at West Rowan (5-1, 3-0 SPC)
Central Cabarrus’ league record is deceiving as the Vikings have lost to Concord and Hickory Ridge, the SPC’s two most impressive teams so far. The Vikings’ league win was a hard-fought one at Carson.
After an opening loss to still undefeated Mooresville, West Rowan has won five straight.
Still, it’s not like the Falcons have scared anyone. The last four wins have come against teams with losing records and three of those four were tight. In other words, despite the disparity in league records, you can make a case for Central being a slight favorite tonight in Mount Ulla.
Central Cabarrus is not the offensive machine it was a year ago, but it has a flock of good running backs.
West Rowan won in two overtimes against Carson last week, but it will need to get its running game back on track to win this one.
Central Cabarrus beat the Falcons 28-16 in 2013. It was the first win over West Rowan since 1998. The Vikings lead the all-time series 9-6.
Northwest Cabarrus (1-5, 0-3 SPC) at East Rowan (2-4, 1-2 SPC)
The Trojans have dropped four straight since they beat Robinson (0-6), and it’s gotten uglier and uglier. Northwest Cabarrus hasn’t scored since Sept. 12 and has been outscored 101-0 the last two weeks.
East Rowan has little trouble scoring, so it should breeze to its second league win. QB Samuel Wyrick is having one of the best passing seasons in county history.
Seth Wyrick remains his brother’s favorite target. He has 38 catches for 577 yards and five TDs.
Max Wall was key as the Mustangs got their running game going.
East Rowan romped 42-14 over the Trojans in 2013. Northwest Cabarrus leads the all-time series 17-14.
North Rowan (4-2, 0-0 CCC) at Lexington (0-6, 0-0 CCC)
Lexington’s record is awful, but the Yellow Jackets have been overscheduled. None of the six teams they’ve played has a losing record. Two of the six — Newton-Conover and North Davidson — are still undefeated.
Lexington lost 23-21 to a Carver team with a 3-2 record in its most recent outing, so this is a more dangerous game for North Rowan at Philpott Memorial Stadium than it might look like.
North Rowan’s march to the CCC title a year ago started with a 33-13 ground-and-pound win against Lexington. Jareke Chambers, a 2014 Shrine Bowl selection, rushed for 151 yards in that game, and Andra Cowan added 87.
Chambers needs 79 rushing yards to become Rowan County’s sixth 4,000-yard rusher.
North Rowan was seriously banged up when it finished a 14-12 win against Forest Hills in its last outing, but it’s had a week to heal injuries.
North Rowan leads the all-time series 22-15.
Salisbury (1-5, 0-0 CCC) at East Davidson 2-4, 0-0 CCC)
East Davidson has won against South Davidson (0-7) and Central Davidson (1-5).
Salisbury played well in most aspects in a 33-14 loss to Southeast Guilford last week, but it beat itself with special teams problems.
Salisbury is much better offensively than it was a year ago when it was shut out four times in its first six games. The Hornets have a pretty good running game with Willie Clark and Antwond Glenn (792 combined rushing yards) and they have more team speed than East Davidson.
Whether that translates to a 1-0 start in the league remains to be seen. Salisbury lost 33-32 to East Davidson in a wild one last year. That was the first time the Golden Eagles had beaten the Hornets on the field since 2003. East Davidson picked up a forfeit win in 2008.
The Hornets lead the all-time series 13-8.
Robinson (0-6, 0-2 MECKA) at A.L. Brown (3-3, 1-1 MECKA)
Robinson’s struggles have included a loss to Northwest Cabarrus (1-5), so there’s little chance anything could go wrong for the Wonders tonight.
A.L. Brown made strides with its passing game in a 48-35 loss to Vance, topping 200 yards for the first time this season.
The Wonders’ defense has a shot at pitching a shutout tonight. Robinson has been held scoreless twice.
The Wonders have never lost to the Bulldogs and walloped them 61-6 a year ago.
Follow Mike London on Twitter at @mikelondonpost3.