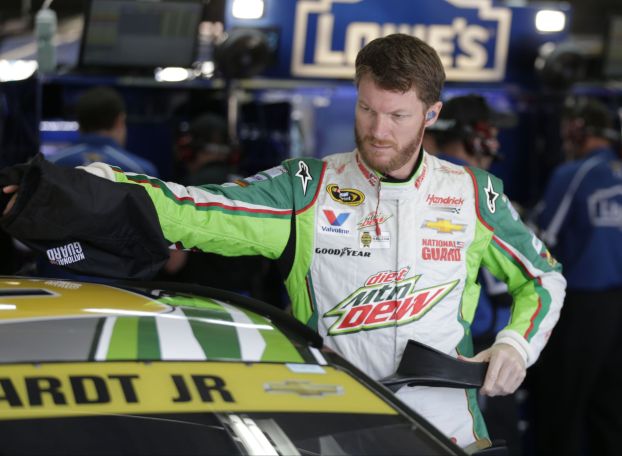 CONCORD, N.C. (AP) — The blown tire while he was leading at Kansas is long forgotten. Dale Earnhardt Jr. is celebrating his 40th birthday on Friday and the milestone has turned into a weeklong celebration.
It kicked off Monday when longtime girlfriend Amy Reimann successfully pulled off a surprise party that NASCAR’s most popular driver never saw coming. Told an appearance on his schedule had been canceled, he planned to go to Charlotte Motor Speedway with Reimann to watch her practice for a charity race.
Then she flipped the script.
“She had her (fire)suit and her helmet and we were getting in the truck and the garage door was going up and we’re getting ready to drive down here so she can practice,” Earnhardt said Thursday. “She said, ‘I’ve gotten you something earlier today’ and handed me a little bag and it had a (beer) koozie in it and she said, ‘Let’s go upstairs, change clothes and go party.’
“I was like, ‘I’m confused. What’s going on?’ I walked downstairs in my basement where all my family and friends (were). They got me, man. It was good. It was real good.”
Earnhardt has spent time this week with close friends and family, received terrific gifts and showed up at Charlotte ready to win a race. Although he won the All-Star race as a rookie in 2000, Earnhardt is winless in 29 career points-paying races at Charlotte. He figures it’s bound to happen at some point.
“I always win at the weirdest times in the oddest circumstances. So I feel like everything is lining up and feel real good about this weekend,” he said.
He needs to have a very good Saturday night.
Earnhardt’s 39th-place finish at Kansas put him in danger of being eliminated from the Chase for the Sprint Cup championship. A victory earns an automatic berth into the third round, and anything else makes next week’s race at Talladega a gamble.
“I knew as soon as we had trouble last week, there’s two kinds of approaches and they’re both equally as nerve-racking,” Earnhardt said. “One approach is to run well and hope that nothing bad happens. The other approach is something has happened, then you really can just kind of go for broke. I feel less pressure now than I did before the race at Kansas.”
Some of that has to do with the memorable week he’s had leading into Friday’s big day. The Hendrick Motorsports driver has received numerous gifts, and Charlotte Motor Speedway officials on Thursday presented him with a replica of the legends car he drove in his first career race.
It’s helped overcome the disappointment of Kansas, where he and the No. 88 crew know they had a strong Chevrolet but were sunk when his tire unraveled.
“Definitely being 40 has been an awesome time,” Earnhardt said. “This week has been full of surprises and pleasant stuff happening left and right. That probably has a little bit to do with my disposition. But I felt like as soon as what happened happened last week, I sort of had to switch into this (relaxed) mode and get ready for our opportunity here this weekend. I was just so happy with the way that car ran last week and how fast we were.”