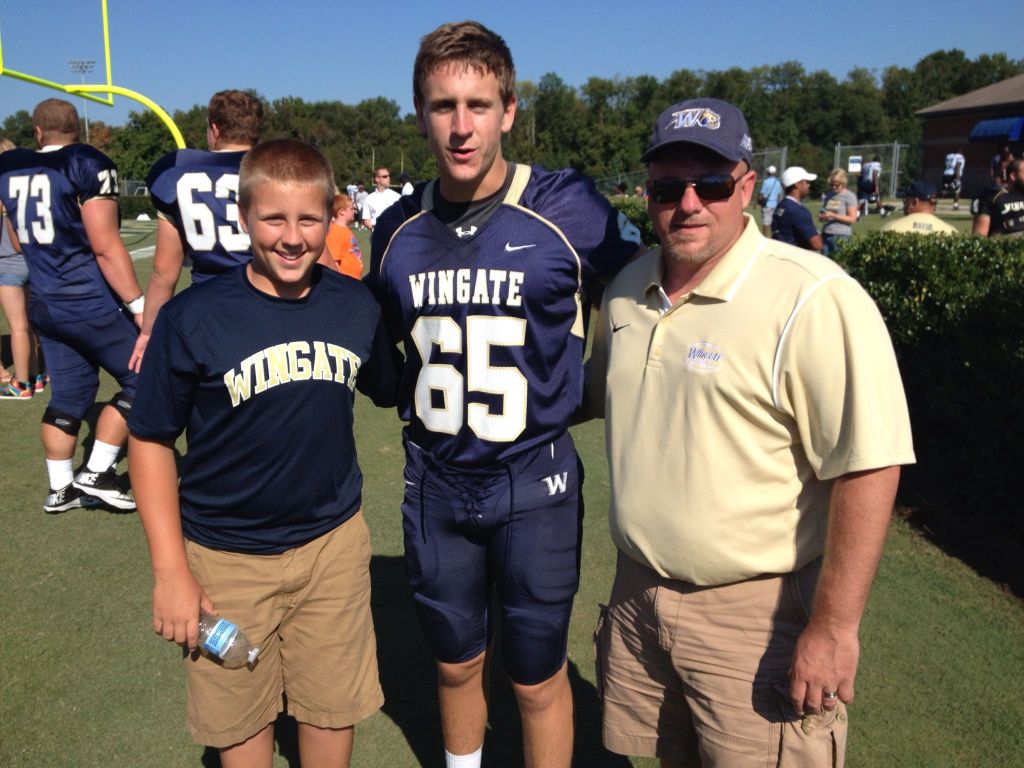 CHINA GROVE — While it seems like a fairy tale now, once upon a time South Rowan had 15 winning football seasons in a row.
Coach Reid Bradshaw got the red-and-black machine chugging with a modest 5-4-1 record in 1974. It gathered steam when Greg Poole came along, and then Michael Ramseur, and the wins kept coming after Bradshaw handed the reins to his successor Larry Deal in 1983.
It was basic, no-frills football. Run the ball, minimize mistakes and play fierce defense, but the Raiders were very good at it. Deal’s first team won 11 games — still the school record.
All that winning was supposed to come to a screeching halt in 1985. That’s the season South Rowan headed to 4A to play in the Central Piedmont Conference with A.L. Brown, Davie County and the Winston-Salem schools.
Deal, his staff and players still believed the Raiders could not only compete, but win.
One of those players was a 5-foot-10 junior linebacker named Tim Bell.
“We had a long line of good linebackers in the 1980s,” said Steve Beaver, Bell’s position coach. “Tim was not the fastest, but he was tough and he was smart. He understood what the opponent’s tendencies were and he was constantly in the right place at the right time. He was that coach on the field for us and he overcame injuries to become the leader of our defense.”
Bell started playing football in third grade and fell in love with it. He did well at Corriher-Lipe Junior High and couldn’t wait to play for Deal.
“Coach Deal was a drill sergeant, and we had practices so tough kids today couldn’t imagine what they were like, but he was just a great coach,” Bell said. “Coach Beaver was a great coach too, and he taught me how to play linebacker. We learned discipline and respect.
“They were tough coaches, but they made us better players. When I see them today, it’s still, ‘How are you doing, Coach?’”
If there was doubt South Rowan’s style of football would work in the CPC, it was ended by a 7-0 win against R.J. Reynolds in the Raiders’ first league game.
South Rowan came close to running the CPC table in 1985. The Raiders (7-4) lost twice in the league — in triple-overtime to A.L. Brown and 14-13 to Mount Tabor. South Rowan made the playoffs its first season in 4A, losing to Charlotte Harding 16-6 in the first round.
Once again, that was supposed to be the end of the story. Only four starters returned for the 1986 season. One of them was Bell. But the Raiders worked that much harder.
“People worry so much about injuries now that there’s not much contact in practice,” Bell said. “We lined up and hit each other every day.”
In the 1986 season, South Rowan’s offense, keyed by quarterback Dale Earnhardt and running back Michael Wright, managed 15 points per game. The Raiders’ 5-2 defense — with Bell and Chris Drye as the linebackers — bent some, but rarely broke. It held 10 of 11 opponents to 21 or fewer points.
The defining game of Bell’s career was South Rowan’s 7-4 win at Northwest Cabarrus in 1986. South Rowan had close to zero offense, but Bell was credited with 15 tackles, and the Raiders won by a baseball score.
“I was the Cable Vision player of the game,” Bell said with a laugh.
Starting with the 1980 season, South Rowan had made the playoffs every year, but it appeared that string would end in 1986. Three CPC teams were going to the playoffs, but West Forsyth was a state power, A.L. Brown was second, and third looked like a longshot. Going into the final night of the season, R.J. Reynolds was finished at 4-3, Davie was 4-2, and South Rowan was 3-3.
But the Wonders wiped out Davie, while South Rowan beat Mount Tabor 21-20. Bell, who had eight tackles, was one of five Raiders who stopped a Mount Tabor two-point conversion to extend the season and the string of playoff appearances.
The three-way tie for third was broken by a draw, and South Rowan assistant Perry Bradshaw drove to Kannapolis to pull the winning card.
So South Rowan returned to the playoffs. Again the opponent was Harding, a No. 1 seed, and the Raiders put up a fight in bitter cold at Charlotte’s Memorial Stadium. Bell intercepted a pass at the goal line, but Harding scored in the fourth quarter to beat the Raiders 14-10.
Bell led the Raiders in tackles that year, and he had one more great moment as a football player.
“I remember they called us into the library and Coach Deal was telling us who made all-conference and who made all-county,” Bell said. “And then he said, ‘Oh, Tim, you’re the county defensive player of the year.’ It took a little while for that to sink in.
“I was like, ‘Wait a minute, what did Coach just say?’ It caught me by surprise, but it was a great honor.”
Bell has spent most of his working life at Imperial Brown, known for manufacturing freezers and coolers.
Bell also coached middle school football a long time. You can’t coach like a drill sergeant now, but he tried to pass on to youngsters the sort of discipline Deal and Beaver taught him.
It’s a sign of changing times that Bell’s son, T.J., was a good player for South Rowan’s neighbor and rival Carson, which opened in 2006. T.J. will be handling long-snapping duties for Wingate when it plays Catawba on Saturday. Bell has another son, Isaac, and he forced two fumbles on Thursday as Carson’s jayvee team beat South Rowan.
Isaac plays linebacker and wears his father’s No. 41. All the Bells are proud.
Follow Mike London on Twitter at @mikelondonpost3.