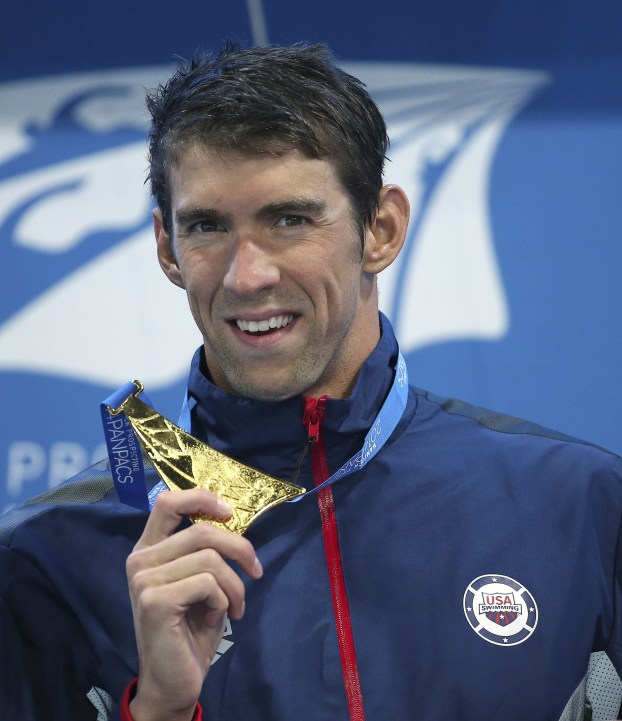 By Childs Walker
The Baltimore Sun
(MCT)
Oct. 07–USA Swimming has suspended Michael Phelps from competition for six months and removed him from its 2015 world championship team in response to the record-setting Olympian’s drunken-driving arrest in Baltimore last week.
The punishment came the day after Phelps announced he was checking into a six-week, in-patient treatment program to work on his personal life.
“Michael’s conduct was serious and required significant consequences,” USA Swimming’s executive director, Chuck Wielgus, said in a statement. “Michael has publicly acknowledged the impact of his decisions, his accountability especially due to his stature in the sport and the steps necessary for self-improvement. We endorse and are here to fully support his personal development actions.”
A spokesperson for Phelps issued a brief statement: “Michael accepts USA Swimming’s sanctions. He has apologized for his actions and, as he shared yesterday, is taking steps to address them.”
Phelps’ longtime coach, Bob Bowman, was out of the country but said through a spokesman: “I am in full support of Michael taking time to focus on himself right now. My main concern is that he takes the steps he needs to learn and grow as a person through this experience. I am confident that he’ll return a stronger person.”
USA Swimming, the sport’s governing body in this country, said Phelps agreed to be removed from the world championship team, which will compete in Kazan, Russia in August. The event is the most important on the swimming calendar besides the Olympics, and Phelps’ absence could leave questions about his form as he approaches a possible fifth Olympic appearance in Rio de Janeiro in 2016.
But his suspension wouldn’t prevent him from qualifying for a fifth Olympics. The U.S. team will be selected at the Olympic trials, which begin in late June, 2016.
NBC swimming analyst Rowdy Gaines said he thinks the suspension would have little impact on Phelps’ training for the Olympics.
“In the grand scheme of things, nobody is going to remember how Michael Phelps swam in Kazan, Russia in the summer of 2015,” said Gaines, a former Olympic gold medalist. “It hurts the ego, but he’ll have plenty of other meets to swim in and another whole year to train after that.”
Gaines said he was proud of USA Swimming for issuing a strong punishment. “You have to make a statement,” he said.
Phelps, 29, will be allowed to train with the North Baltimore Aquatic Club but will not be allowed to compete in a USA Swimming-sanctioned competition until March 6, 2015. He also will not receive his $1,750-a-month stipend from USA Swimming during that period.
“I recognize that this is not my first lapse in judgment, and I am extremely disappointed with myself,” Phelps wrote on Twitter on Sunday morning. “I’m going to take some time away to attend a program that will provide the help I need to better understand myself. Swimming is a major part of my life, but right now I need to focus my attention on me as an individual, and do the necessary work to learn from this experience and make better decisions in the future.”
Phelps served a three-month suspension from USA Swimming in 2009 after British tabloids published a photograph of him smoking a marijuana pipe at a college party.
The governing body suspended Phelps, its most decorated competitor and biggest star, under a rule that says an athlete can be disciplined for conduct “which is detrimental to the image or reputation of USA Swimming … or the sport of swimming.”
Phelps was stopped last Tuesday outside the Fort McHenry Tunnel after being clocked going 84 mph in a 45-mph zone, police said. He was charged with DUI, excessive speed, and crossing double lane lines. His blood alcohol level was 0.14, and he failed field sobriety tests, police said. The state’s legal limit is .08.
Phelps is scheduled to appear in Baltimore District Court for trial Nov. 19.
The arrest was his second for drunken driving. He pleaded guilty to driving while impaired after being arrested in 2004 in Wicomico County.
Given the length of Phelps’ suspension, the first event he could conceivably swim would be the Mesa (Ariz.) Grand Prix in April, the same event at which he began his comeback from a 20-month retirement this year.
Phelps swam the world’s fastest 100-meter butterfly of 2014 at Phillips 66 National Championships in August and won three gold medals at Pan Pacific Championships later that month. But he struggled to find his old consistency and to produce strong swims in both morning qualifying and evening finals. He blamed his more casual training regimen and said he planned to work harder as he pointed toward world championships.
With that possibility removed, it’s unclear where Phelps might place his focus when he returns to the pool.
Phelps hasn’t formally committed to an Olympic bid. But Gaines — who has called almost all of Phelps’ major races — said he’d be stunned if the swimmer doesn’t continue his comeback after leaving in-patient treatment.
“I don’t think he’s a quitter,” Gaines said. “And I think he’d be viewed in many eyes as a quitter. I’d stake a lot on swimming remaining a major part of his life.”