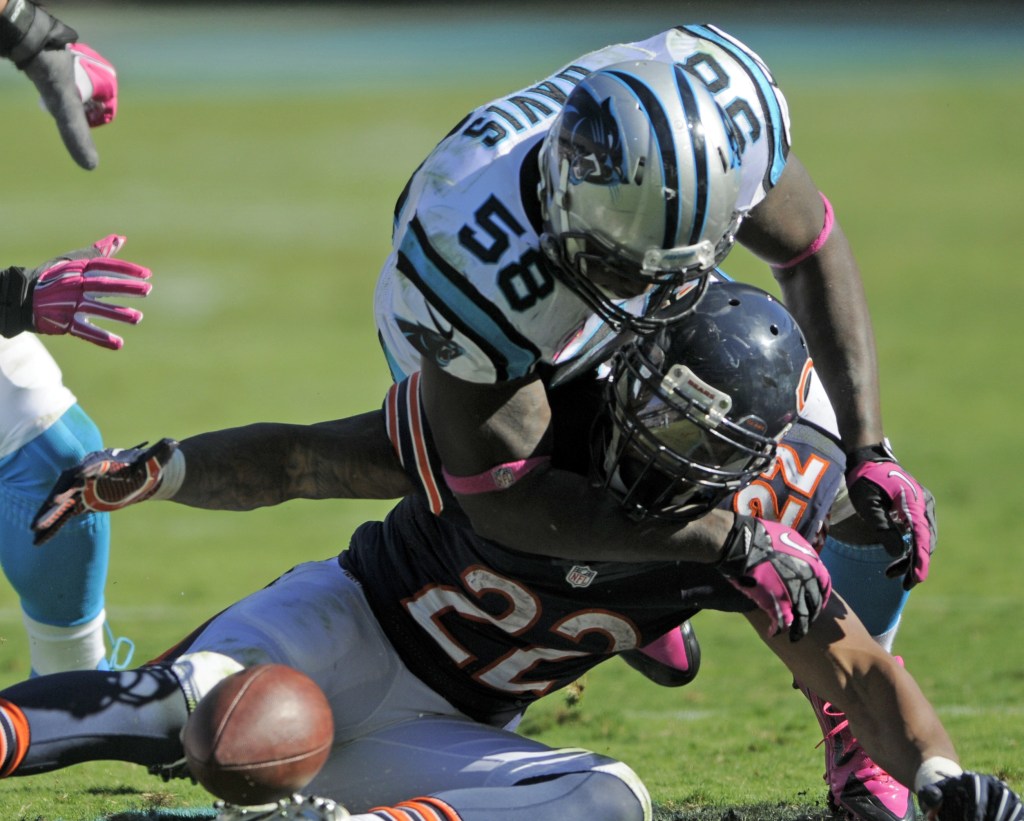 Cam Newton and the no-huddle offense — along with a little help from Chicago Bears kicker Robbie Gould — provided just that Sunday.
The Panthers took advantage of Gould’s missed 35-yard field goal late in the first half and seized the momentum. Newton found his stride working the no-huddle, Carolina’s defense forced four turnovers and the Panthers overcome a 14-point deficit to beat the Bears 31-24.
Carolina recaptured sole possession of first place in the NFC South.
“The no-huddle offense has been our edge,” said Newton, who threw for 255 yards. “It was not panic time, because we have been in these situations before.”
Newton provided the go-ahead score with 2:18 left on his second touchdown pass to Greg Olsen, helping the Panthers (3-2) snap a two-game slide.
The Panthers trailed 21-7 late in the first half and the Bears were looking for more after Newton was intercepted by Lance Briggs. But Chicago’s drive stalled and Gould missed wide right.
The momentum turned immediately.
“It was huge,” said Olsen, who spent four years with the Bears. “We got in the huddle and said, ‘That’s our break.’ We were waiting for something to bounce our way and that was it. We went right down and bang, bang. … Cam got in an awesome groove and from that point on he was on fire.”
Newton capped the drive with a 9-yard pass to Olsen to pull Carolina within 21-14 at halftime. The Panthers stayed with the no-huddle and Newton led a 10-play, 86-yard drive in the third quarter, with Chris Ogbonnaya scoring on a 1-yard run to tie the game.
From there, Carolina’s defense took over. The Panthers forced three turnovers on Chicago’s last three possessions.
The biggest came with the game tied at 24 when Antoine Cason stripped Matt Forte of the ball and the Panthers’ Kawaan Short recovered at Chicago’s 23. Six plays later, Newton found Olsen on a slant route for a 6-yard touchdown.
The Panthers sealed the win when Short sacked Jay Cutler and Charles Johnson recovered the fumble.
It was a big step for Carolina’s defense, which allowed 75 points and 908 yards the past two weeks in blowout losses to Pittsburgh and Baltimore.
“It was a matter of time before we came back,” Short said.
For the Bears it was a distressing finish considering they appeared to be in control in the first half.
Cutler was 28 of 36 for 289 yards with two TDs, but turned the ball over three times for the Bears (2-3). Forte had 61 yards rushing and 105 yards receiving and a touchdown before his costly fumble.
“There were many opportunities for us to put this one away offensively,” Cutler said. “We put our defense in a bad place, and I thought they played real well, given the circumstances and field position we put them in. A lot of that is on me.”
It was also a big day for Newton, who was comfortable running the no-huddle set — just as he has most of the season.
“He’s pretty good at it,” Olsen said. “It’s been good for us this year. Sometimes certain situations dictate that you can’t stay in it, but when we’ve done it we’ve been pretty successful. When we need a spark we can go to it. And it seems like it does spark us.”
The Bears scored 14 points off Carolina turnovers to build a 21-7 lead in the first half.
Cornerback Isaiah Frey stripped Panthers receiver Kelvin Benjamin of the ball and recovered at the Panthers 28, setting up a 10-yard TD pass from Cutler to Forte.
Chicago’s Willie Young beat guard Amini Silatolu for a strip-sack fumble on Newton and Lamarr Houston recovered at the Carolina 13 on the next possession. Three plays later Cutler scrambled 10 yards for touchdown.
Cutler pushed the lead to 21-7when he beat the Panthers on a cornerback blitz, flipping the ball to the flat where Alshon Jeffery raced around two defenders for a 25-yard catch-and-run touchdown.
“I’ve got to take accountability for our failure to get it done in the second half on all three phases — that starts with me,” Bears coach Marc Trestman said.
NOTES: Newton said he had four wisdom teeth removed earlier this week. … Panthers cornerback Josh Norman left with a shoulder injury. … Bears safety Chris Conte left with a concussion. … The win was Rivera’s first against the team he helped win a Super Bowl in 1985.