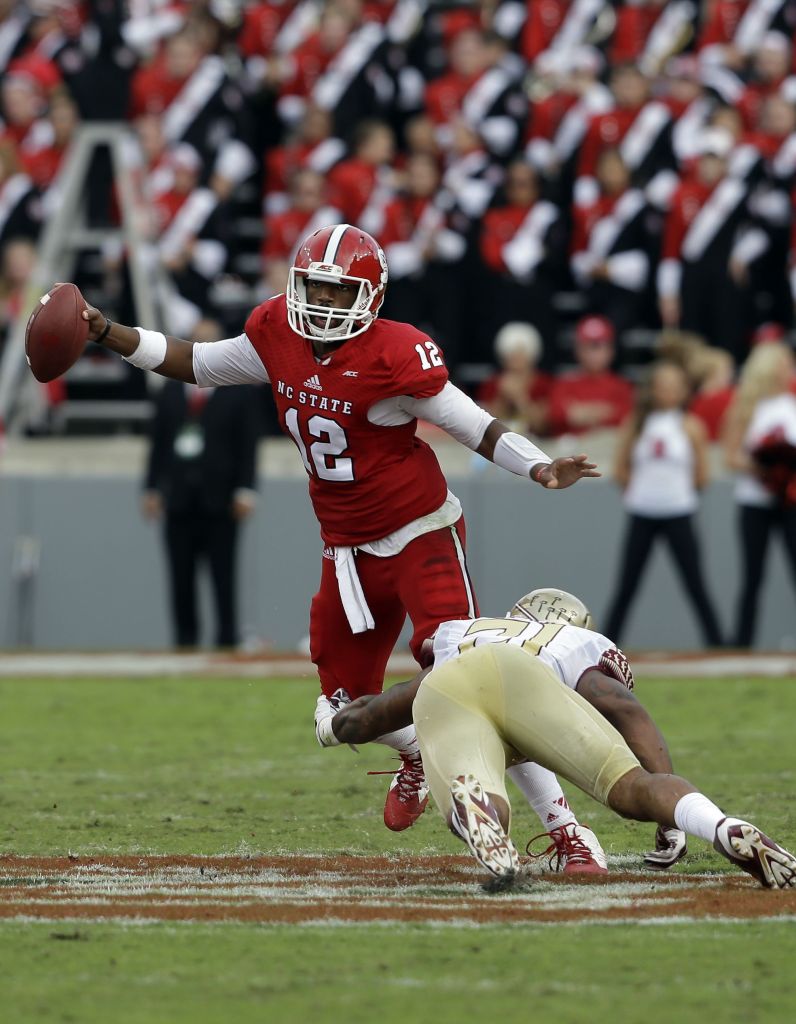 RALEIGH, N.C. (AP) — Jameis Winston threw for 365 yards and four touchdowns in his return from a suspension, helping No. 1 Florida State rally from 17 down to beat North Carolina State 56-41 on Saturday night.
The Heisman Trophy winner directed four straight second-half touchdown drives to help the reigning national champions fight through and extend the nation’s longest active winning streak to a program-record 20 games.
Rashad Greene hauled in 11 passes for 125 yards and the go-ahead score for the Seminoles (4-0, 2-0 Atlantic Coast Conference), while Karlos Williams ran for three scores — the last with 2:07 left to seal it.
Winston was suspended for making an obscene public comment on campus last week, then watched backup Sean Maguire lead FSU to an overtime home win against Clemson.
He shook off a third-quarter interception to keep the Seminoles pushing forward against the Wolfpack (4-1, 0-1) and quarterback Jacoby Brissett.
Brissett, a Florida transfer who was on the sideline for the Gators during FSU’s last loss in November 2012, threw for 359 yards and three touchdowns while putting up a couple of highlight-reel plays to keep momentum for the Wolfpack in the program’s first-ever home game against the nation’s No. 1-ranked team.
N.C. State led 24-7 after the first quarter and 38-28 midway through the third quarter after Shadrach Thornton’s 10-yard scoring run.
But Winston directed a quick 71-yard drive that ended with his 15-yard scoring toss to Jesus Wilson, then capitalized on Brissett’s fumble by zipping the ball to Greene — and just past Jack Tocho — for a 42-38 lead with 3:24 left in the third.
Williams’ 1-yard scoring run pushed that lead to 49-38 early in the fourth.
Williams’ 12-yard score in the fourth quarter gave him 126 yards rushing for the day.
FSU has won 17 straight ACC games.
It was a frustrating finish for N.C. State considering its promising start. Brissett connected with freshman Bo Hines for a 54-yard touchdown pass just 18 seconds into the game.
Brissett later came up with a jaw-dropping play, ducking under the grasp of a Seminoles defender in the pocket then staying on his feet to break away from another near the sideline to throw an 8-yard scoring pass to Johnathan Alston for a 24-7 lead with 2:06 left in the opening period.
It marked the first time in program history that FSU had given up 24 points in the opening quarter.
———
Follow Aaron Beard on Twitter at http://www.twitter.com/aaronbeardp