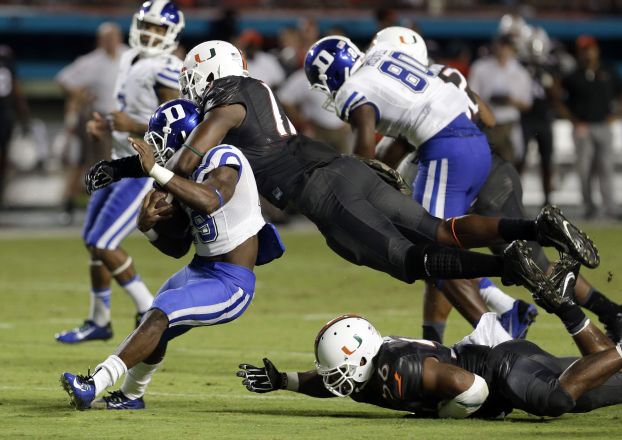 MIAMI GARDENS, Fla. (AP) — Fourth down, 19 yards to go, a rainstorm pouring down and Miami quarterback Brad Kaaya knew he was about to get clobbered from his blind side.
No problem.
He stepped up, Miami’s maligned defense did the same just about every time it was asked to, and the Hurricanes put together a much-needed win.
Duke Johnson continued his climb up Miami’s career lists with 155 yards and a touchdown, Kaaya added two more scoring passes to his true-freshman resume — including a perfect 28-yard TD toss to Herb Waters on that fourth down conversion — and the Hurricanes beat reigning Atlantic Coast Conference Coastal Division champion Duke 22-10 on Saturday night.
The Hurricanes’ defense — shredded by Duke last year, and shredded by Nebraska last week — held the Blue Devils to 264 yards.
“They grew up a lot today,” Golden said.
Kaaya keeps growing up more and more every week, it seems.
He completed 20 of 34 passess for 223 yards and didn’t throw any interceptions for Miami (3-2, 1-1 Atlantic Coast Conference), which won for the 11th time in its last 12 home games. And Johnson became the third Miami player to reach 4,000 all-purpose yards, plus passed Graig Cooper for the No. 5 spot on the Hurricanes’ all-time rushing list.
“The win is more important,” Johnson said.
Shaquille Powell ran for 58 yards and a touchdown for Duke (4-1, 0-1). The Blue Devils saw their school-record-tying 12-game regular season winning streak snapped, and quarterback Anthony Boone lost for the first time in 15 career starts outside of postseason play.
“Offensively, it was a tough day,” Duke coach David Cutcliffe said. “To Miami’s credit they won a lot of the battles. I’m proud of our people for continuing to battle. We fought hard on a day that one of the better parts of our team traditionally was struggling, we had a chance to win in the fourth quarter. We had a few unfortunate plays defensively. Otherwise they played about as well as they could against a team with as many weapons as they have.”
Cutcliffe called this game the biggest test Duke had faced this season, which was obvious — the Blue Devils had four blowouts to tune up for league play. But what worked last season against Miami fell way short this time around; Duke was held 279 yards below what it managed last season against the Hurricanes, and was being outgained 173-17 after the first quarter.
Duke was 2 for 16 on third downs, plus 0 for 3 on fourth downs. Boone completed 22 of 51 passes for 179 yards, with two interceptions.
“Their defense made a lot of plays,” Boone said. “They were physical. They made more plays on defense than we made on offense.”
Duke managed only 85 yards on the ground, its lowest total since November 2012.
“We were accountable from the top down,” Golden said of his defense. “We had good leadership all week and they were determined not to let the season go that way.”
Strong rain started to fall in the third quarter, so much that it was tough to see from one side of the field to the other — and tougher still for some to corral a wet football. A third-down pass from Kaaya skipped off the hands of tight end Clive Walford and deflected again off Duke safety Deondre Singleton — who nearly had an interception.
Miami took advantage of the second chance. Electing to keep the offense on the field instead of trying a long field goal in the rain, Miami gave Kaaya a shot at the end zone on fourth down and he delivered — with Waters getting a foot down while hauling in a 28-yard catch for a score, and the Hurricanes had a 16-7 lead.
Duke still had a chance at the lead entering the final 15 minutes. But on 3rd-and-7 from the Miami 45, a shotgun snap got away from Boone — a problem all night for Duke — and the drive stalled with a punt.
Ladarius Gunter intercepted a pass by Boone on the next Duke possession, setting up a drive that was culminated by Kaaya’s second touchdown pass of the night, a 47-yarder to running back Joe Yearby.