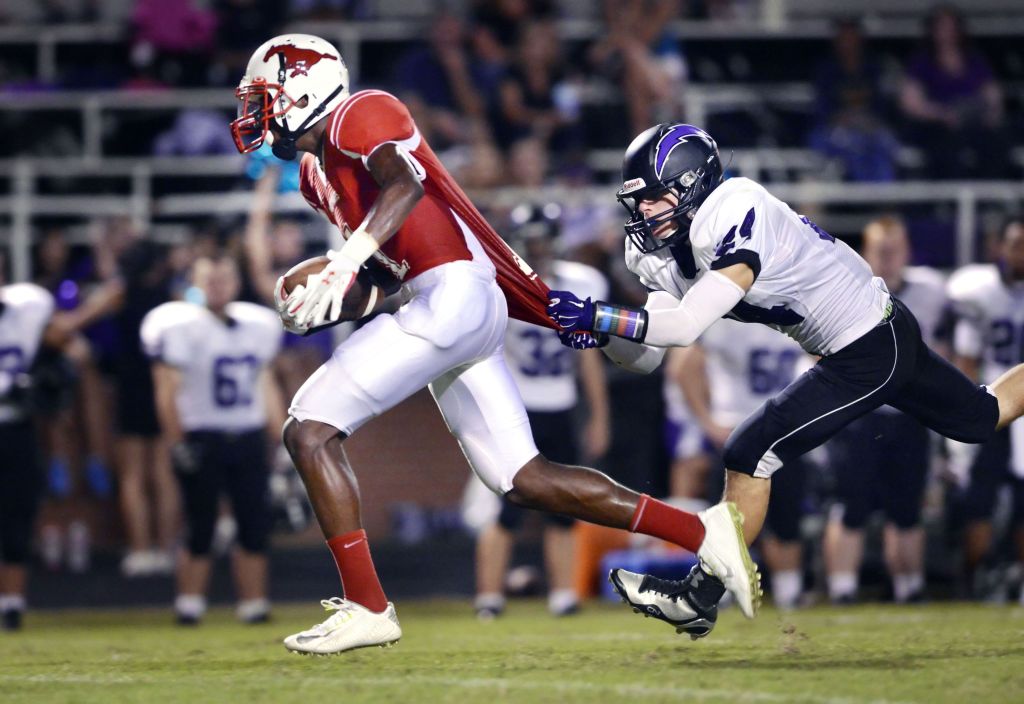 GRANITE QUARRY — There were a lot of big numbers and a lot of scoring last week in East Rowan’s win over Cox Mill. The Mustangs got a 46-43 win in a game that seemed lost when Cox Mill returned the opening kickoff 95 yards for a touchdown. Strong second and third quarters put the Mustangs ahead, and they held on in the fourth quarter to put one in the win column.
“I told them after a game, the good teams find out how to win close football games,” head coach Kenneth McClamrock said. “We beat a really good football team. They’re going to win a lot of football games this year, and our kids found a way to win.”
East Rowan quarterback Samuel Wyrick looked to a pair of reliable targets on his way to 300-yard, five-touchdown night. On the receiving end of 16 of 24 of Wyrick’s completions were his twin brother Seth Wyrick and East Rowan newcomer Naquis Caldwell. The two receivers combined for 16 catches for 234 yards.
Caldwell’s first touchdown catch got the Mustangs on the board with 5 minutes, 37 seconds left in the first quarter. His second cut the Chargers’ lead down to seven points early in the second quarter. Wyrick’s touchdown catch in the middle of the second quarter was an answer to a Cox Mill touchdown and made it a seven-point game.
In the third quarter, Caldwell’s got his final touchdown of the night. His 34-yard touchdown catch from Samuel Wyrick put the Mustangs out front 46-28 with 1:15 left in the period. The margin was enough for a win, thanks in large part to the Caldwell’s and Wyrick’s four touchdown catches. Caldwell said as long as Cox Mill was still scoring, East Rowan was going to keep scoring.
Having two big targets like Caldwell and Wyrick creates problems for opposing defenses.
“They can’t focus on one side of the field or it’s six on the other side,” Wyrick said. “So it’s difficult.”
The two rank among the best in Rowan County right now. Wyrick averages a county-best 109.3 yards receiving per game. Caldwell is third with 63.3 yards per game. The duo has eight touchdown catches between them.
“I think we can put defenses in a bind,” McClamrock said. “They’ve got to figure out which one they want to cover. Since the day I got here we’ve told our kids that one week a kid may have eight catches, and the next week he has two catches. If he has two catches someone else is going to step up and have a big game as well.”
The Mustangs (2-1, 1-0 SPC) have four receivers with at least eight catches through the first four games of the season. It doesn’t sound like a lot, but East Rowan, like a lot of Rowan County teams, has focused on the run game throughout the years.
This week, trying to keep Wyrick and Caldwell in check are the Carson Cougars and head coach Joe Pinyan. Pinyan is 9-2 against East Rowan during his time as head coach of Salisbury and Carson.
The Cougars and Mustangs met last year in a game that changed their respective seasons. Carson earned a 32-28 victory at East Rowan. The win propelled Carson to a 7-5 season while East Rowan went 4-8.
A win Friday could help the Mustangs build as they dig into the meat of their schedule. Caldwell said the Mustangs aren’t looking down the road and are taking this season one game at a time.
“We just want to keep our momentum going. We know if we win (Friday), it’s big momentum,” Wyrick said. “It’s better to be 2-0 than 1-1 [in SPC play]. So, we got to get momentum rolling and can’t lose it.”
Follow Adam Houston on Twitter at @AdamRHouston.