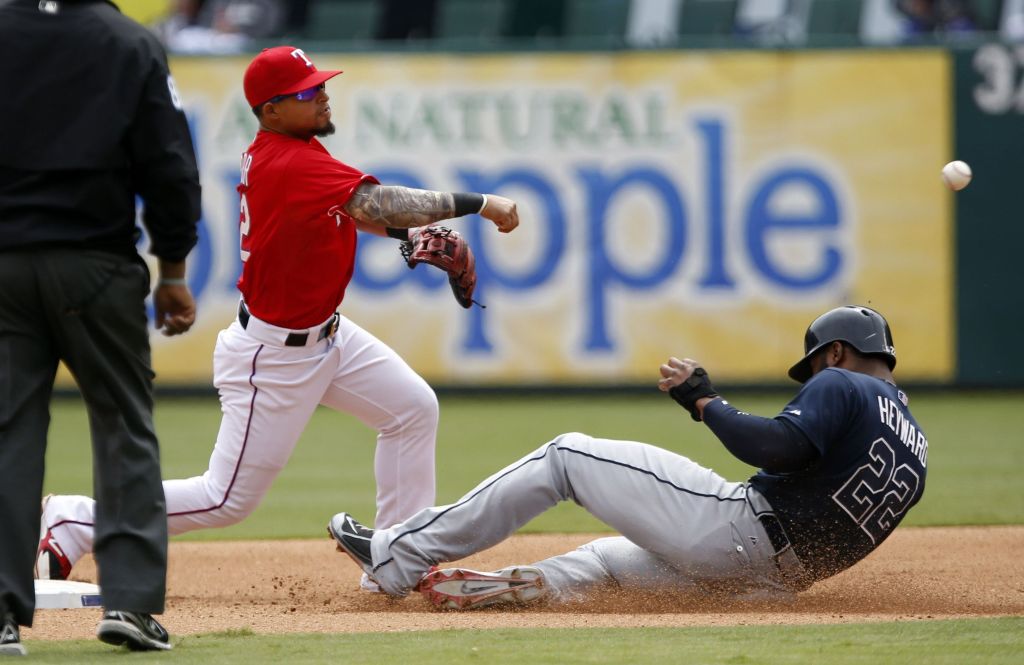 ARLINGTON, Texas (AP) — Justin Upton says the Atlanta Braves just need to keep playing through the mistakes that now have them chasing the field in the NL wild-card race.
The left fielder will have to lead by example after making a critical error that led to three unearned runs in a 3-2 loss to the Texas Rangers on Saturday.
Julio Teheran lost a no-hitter in the sixth, and Upton’s two-out drop of a line drive later in the inning opened the door for Rougned Odor’s go-ahead double.
The Braves, who started the day three games behind Pittsburgh for the second NL wild-card spot, dropped to 2-6 on their nine-game road trip. They go into Sunday’s finale at risk of being the first team swept by the Rangers since April.
“At this point, we’ve got to pick ourselves up,” Upton said. “We’ve made some mistakes where we haven’t made up for it.”
Teheran (13-12) faded after a strong start for the second straight outing. He struck out six in his fourth complete game of the season, and the only three hits he gave up were in Texas’ three-run sixth.
“I wasn’t disappointed about the no-hitter,” the 23-year-old right-hander said. “I was just trying to keep the lead and win the game. The whole game I felt good.”
Teheran retired 13 of the first 14 last Sunday at Miami but allowed seven of the next nine to reach in a 4-0 loss. The sixth got him this time, but only after Upton’s error when he tried to make a running catch and dropped a line drive from Leonys Martin.
Luis Sardinas had broken up the no-hit bid with a one-out single.
“Nobody feels worse about it than Justin,” Braves manager Fredi Gonzalez said. “He makes that play 100 out of 100 times. He was coming in hard and it just bounced off his glove. It compounds it when we’re not scoring too many runs.”
Bonilla (1-0), starting after two career relief appearances because Scott Baker was scratched with triceps tendinitis, made it through six innings on 78 pitches despite four walks and three straight batters reaching in Atlanta’s two-run third.
The 24-year-old’s reward came from fellow rookie Odor, who followed Elvis Andrus’ RBI single with a drive to the warning track in left-center field that brought home Martin and Andrus.
“Amazed. How’s that?” Texas manager Tim Bogar offered with a smile when he asked if there was something beyond “ecstatic,” the word he used for how he would feel if Bonilla went five innings on a pitch count of roughly 75. “I was really happy with how he did.”
With closer Neftali Feliz unavailable, Neal Cotts pitched the ninth for his first save this season.
FINALLY SOME RUNS FOR TEHERAN
The Braves, who were shut out in Teheran’s previous two starts, went up 2-0 in the third on soft run-scoring hits from Phil Gosselin and Freddie Freeman, who had a fly-ball double down the left-field line with Ryan Rua playing in left-center field.
MILD TEXAS SUMMER
The temperature at first pitch was 59, the coolest since April 17 and 39 degrees lower than three nights earlier. It will go down as a mild summer for Texas baseball. The Rangers matched the coolest August gametime temperature at 71 and aren’t likely to add to the only triple-digit first pitch on July 27 (100 degrees).
TRAINER’S ROOM
Braves: Gonzalez said C Evan Gattis (strep throat) is likely to miss his sixth straight game in Sunday’s series finale, costing the Dallas native a chance to play in front of the hometown crowd.
Rangers: Bogar said he hopes Baker will pitch again this season. The next chance would be Friday at the Los Angeles Angels.
UP NEXT
Braves: LHP Mike Minor (6-10, 4.58 ERA) makes his first appearance against the Rangers. He has made six straight quality starts but has just a 2-3 record to show for it. The Braves have scored one run combined in his past two starts.
Rangers: RHP Colby Lewis (9-13, 5.29 ERA) is set for his team-leading 27th start a year after partial hip replacement surgery. He has gone at least seven innings in three straight starts, one shy of his career record in 2011.