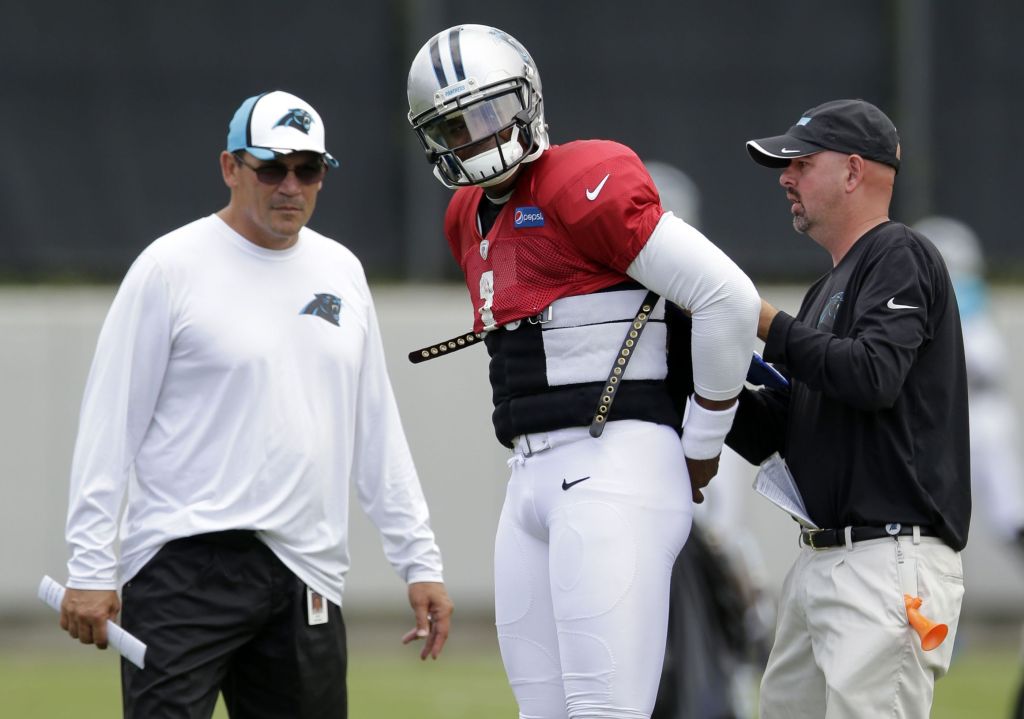 CHARLOTTE, N.C. (AP) — Panthers nine-year veteran safety Roman Harper knows all too well about what wide receiver Calvin Johnson can do to a defense.
Harper was a member of the New Orleans Saints when Johnson caught 12 passes for 211 yards and two touchdowns in a 2011 playoff game.
“It’s a chore to hold him below 120 yards” receiving, Harper said shaking his head.
Harper said facing Johnson and quarterback Matthew Stafford on Sunday will be a good measuring stick for Carolina’s revamped secondary, which includes three new starters this season.
Stafford and Johnson hooked up for a pair of touchdown passes in Detroit’s 35-14 victory over the New York Giants on Monday night. Stafford threw for 346 yards — with 164 to Johnson.
“You don’t find a guy who is that size who can run a 4.3 like he does,” Harper said of the 6-foot-5, 236-pound Johnson. “He has the whole package.”
Panthers coach Ron Rivera agrees — and he thinks the quarterback isn’t too bad, either.
After watching the Lions’ dominating offensive performance in Week 1, Rivera offered this response: “Um, wow.”
“They score right away on two big plays and it shows the connection there is between the quarterback and wide receiver and how they have such a good feel for each other,” Rivera said.
Carolina’s defensive front seven is one of the best in the league, led by NFL Defensive Player of the Year Luke Kuechly and defensive ends Charles Johnson and Greg Hardy.
But the back end of the defense continues to be an area of concern.
The Panthers lost cornerback Captain Munnerlyn and safety Mike Mitchell to free agency. Cornerback Antoine Cason and safeties Thomas DeCoud and Harper were signed, and all three are starting. The only returning starter is Melvin White, an undrafted rookie in 2013 who has earned his way onto the first team.
“The communication is starting to come,” Harper said. “Last week we made a few mistakes here and there, but overall it was a great effort.”
The Panthers held Tampa Bay scoreless for three quarters last week and before allowing two late TDs passes in a 20-14 win. But facing Stafford and Johnson is expected to provide a much different challenge than Josh McCown and Vincent Jackson.
“Calvin’s been one of the most, if not the most, productive receiver in the league in the past four or five years,” Stafford said. “You just don’t know how he is going to be used, and he’s had a blast learning this new offense and understanding his role in it now.”
Here are some things to watch from the Lions-Panthers game on Sunday:
NEWTON RETURNS: Cam Newton is expected to return to the starting lineup after missing his first NFL start in four seasons with a rib injury. Newton said he’s “feeling great” and coach Ron Rivera thinks the fourth-year QB is better equipped to take a shot to his midsection than he would have been a week ago. Regardless, it seems highly unlikely Newton will do a whole lot of running Sunday. Newton fractured his ribs in the preseason when he dove headfirst after a scramble out of the pocket instead of sliding. “Will I do it again? You know, who knows?” Newton said. “Coach has been working on the main focus being smart and knowing when to (go down) and when not to.”
SHAKY SECONDARY: The Lions’ defensive backfield was a concern heading into the season after the team lost veterans Louis Delmas and Chris Houston. Then safety James Ihedigbo was inactive for the season opener and cornerback Bill Bentley went down with a knee injury. Eli Manning and the Giants couldn’t take advantage, but Newton will certainly try.
LITTLE MEGATRON?: The Lions may have Johnson, but the Panthers could have their own big-body receiver in first-round pick Kelvin Benjamin. Like Johnson, Benjamin is a big receiver at 6-foot-5 and 245 pounds and has been playing at a high level since being selected in the first round. The Florida State product had 92 yards receiving and a touchdown in his NFL debut.
RUNNING WELL: The Panthers ran for 113 yards last week, getting 72 from 31-year-old running back DeAngelo Williams. It was a solid showing for an offensive line that lost four starters to retirement this offseason. No doubt the Panthers would like to establish the run with Williams, Jonathan Stewart and fullback Mike Tolbert to help keep Stafford on the sideline.
INTERIOR BATTLE: The Panthers have a pair of young guards in second-year player Amini Silatolu and rookie Trai Turner. They’ll have their hands full against Ndamukong Suh and Newton’s former Auburn teammate Nick Fairley, two of the game’s most disruptive defensive tackles.
———
AP NFL website: www.pro32.ap.org and www.twitter.com/AP—NFL